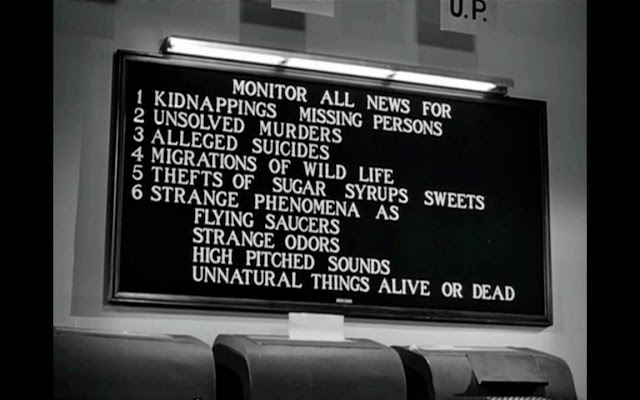 New Mexico, 1954: When police Sergeant Ben Peterson (James Whitmore) and his partner are alerted to a young girl wandering in the desert near Alamogordo, he's plunged into a living nightmare for the newly-born atomic age. The little girl is only the first piece of a puzzle comprised of mysterious and spectacular property damage and murders, one of which features a victim whose back is broken, his skull crushed, and his body filled to brimming with formic acid, with each incident punctuated by a high-pitched keening sound. Top scientist Dr. Harold Medford (Edmund Glenn) and his colleague/daughter, Pat (Joan Weldon), are called in to investigate and are partnered as experts to aid FBI man Robert Graham (James Arness). Upon wafting an amount of formic acid under her nose he catatonic child is jolted out of her state of shock  and recoils in abject, primal terror while crying and repeatedly screaming "THEM!!! THEM!!!" 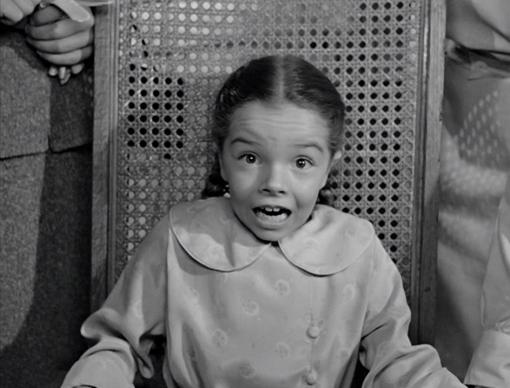 When I was nine years old and saw this child's out-of-her-mind-terrified reaction upon regaining her memory of the horror she'd witnessed, I knew I was not in for just any run-of-the-mill 1950's giant monster yarn. And I was right.

The Medford's both know their shit and all of the mounting evidence clearly shakes them to the core, but they refuse to tell either the FBI or the police what they suspect until they are absolutely positive. Then, while searching the desert where the earlier incidents occurred, the investigators run face-first into an ant roughly the size of a city transit bus and barely escape with their lives after dispatching it with firearms. But that was just one lone specimen, and as everyone knows, ants are hive insects... 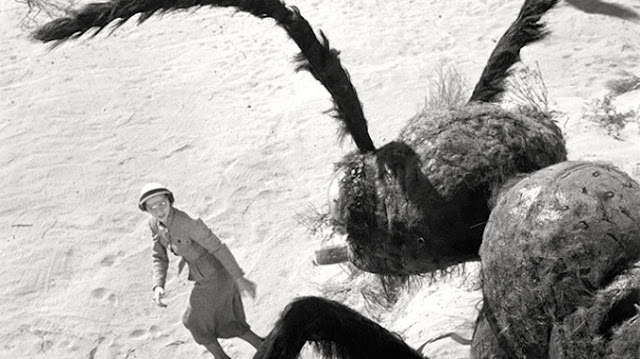 A "HOLY MOTHERFUCKING SHIT!!!" moment if ever there was one.

Doing the math, the elder Medford concludes that what they witnessed was a mutation that must have been the result of the atomic testing done in the area some nine years earlier, so the first thing to do is locate a giant anthill. Such a structure is soon discovered and it's decided to bomb the shit of the place with cyanide and wipe out the mutants before they spread. As Sgt. Peterson and Agent Graham suit up to enter the hive and make sure all of the ants are decisively dead, they are informed that the elder Dr. Medford is too aged and frail to accompany them into the underground labyrinth of the hive and that Pat will go instead. In typical macho 1950's fashion, the idea of a woman going along on such a grave mission is met with strong resistance, but Pat ain't having it and makes it quite clear that the team needs an expert who'll know exactly what to look for and that she doesn't have time to give the dick-slinging FBI dude and cop a crash course on insect pathology, so she's going and if they don't like it they can go fuck themselves. With great reluctance, Graham "allows" Pat along — good luck stopping her, says I — and it's a damned good thing that she was there. Most of the ants were killed by the cyanide grenades but a few live specimens remain, so they meet their end on the receiving end of machine gun fire. 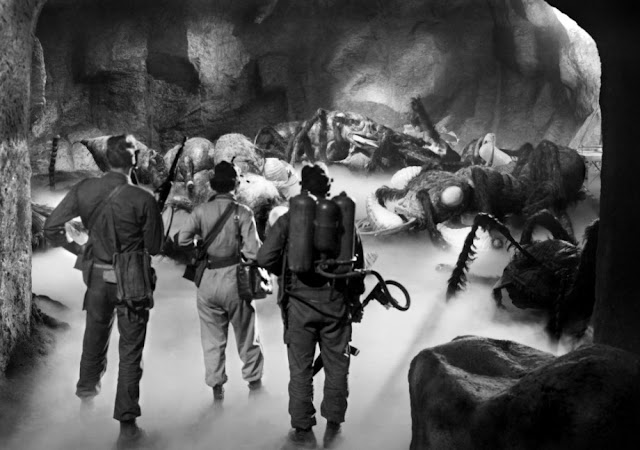 A descent into an atomic age hell.

But Pat's expert eye notices a dire bit of evidence: the remains of two eggs from which two winged queen ants hatched and fled the hive to god only knows where, accompanied by some eager males. The elder Medford concludes that unless the queens are found and the nests they established are utterly decimated once and for all, humanity will have maybe a year until the ants wipe out life as we know it. One colony sets up on board a freighter and kills the crew, but the vessel is promptly sunk by the U.S. Navy. But what about the other queen? That question is answered in edge-of-your seat fashion during the narrative's climax as the 1950's giant bug sub-genre is born.

The entire world in danger of getting its collective asshole eaten out by millions of giant mutant Formicidae? It just doesn't get more serious than that, folks, and the film knows it in no uncertain terms. THEM! unfolds like a scientific procedural, which it is, and we are engrossed every step of the way, making shocking discoveries along with the non-scientists. I first saw this film when I was nine years old and, speaking as the son of a veteran biology teacher, I went into it knowing nothing as to what it was about, but I knew a lot about ants, so when formic acid came up as part of the mystery, my mind did the math and I was gobsmacked by the horror of what an invasion of gigantic, hungry, savage, and reproductively viable examples of those creatures would mean. The script treats the viewer as intelligent, and at no point do any of the characters do anything stupid when facing such a threat to the entire world, which absolutely endeared me to the film as a kid who hated being talked down to. 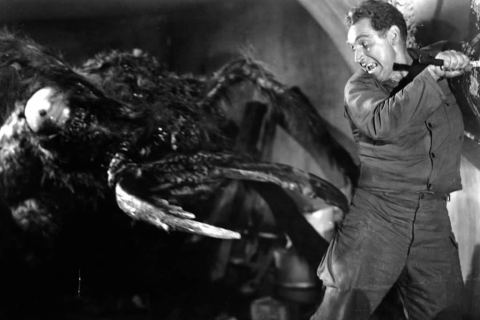 Seriously. Just stop and think about this fate for a moment. Yeah, HELL NAW.

The grand-daddy of all giant bug movies and hands down the finest of the lot, THEM! is a masterpiece from start to finish and it still holds up some sixty-four years after its release. It's smart, suspenseful, features solid performances from the entire cast, makes one understand where several elements in ALIENS (1986) had their genesis, and it's genuinely scary. Though often classified as a science-fiction film, THEM! is definitely a straight-up exercise in terror, albeit admittedly one with a sci-fi launching point. Stack it right alongside the Quatermass films and a number of the better Doctor Who stories in that regard.

And I would be remiss if I did not single out Joan Weldon's groundbreaking portrayal of Dr. Pat Medford for praise. In an era marked by its rampant phallocratic/chauvinistic/misogynistic leanings, Pat's take-no-shit, all-business attitude when dealing with her job as a scientific expert and handling her masculine "superiors" was quite refreshing to see and admirable on the part of the filmmakers. It was quite clear that though attractive she may be, Pat's looks and gender had zero to do with her competence as a scientist or her steel-hard bravery when directly confronting the unthinkable once she got down to business. Sure, she screamed and nearly shat a Humvee when first encountering a shrieking giant ant, but who in their right mind wouldn't have, be they male or female?  But once it was time to kick some scientific ass and save the world, Pat proved logical, methodical, and possessed of nerves of steel. Since I was a child, she's been among my top-tier roster of sci-fi/horror movie heroes, and she has my utmost respect. It makes me squirm with geekish delight when I imagine what she would have made of the events at the terraforming colony on LV-426 and how she would have teemed with Ellen Ripley to hand out flamethrower ass-kickings to the legion of xenomorphs. 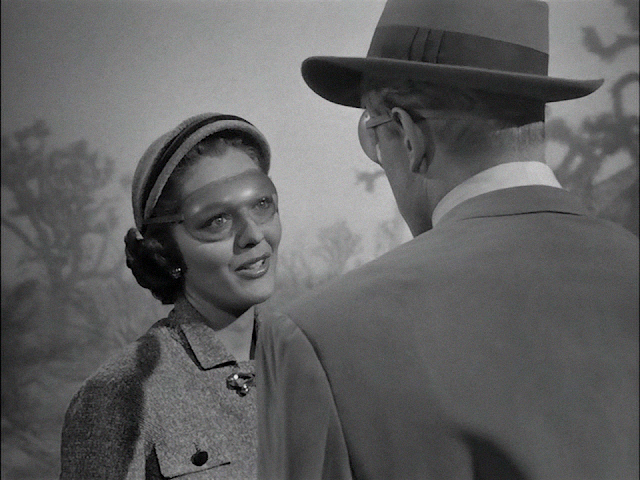 Dr. Pat Medford (Joan Weldon): taker of zero shit and one of the saviors of the world.

Bottom line: THEM! is one of the undisputed masterworks of the genre and no movie buff's education is complete without having seen it at least once. HIGHEST RECOMMENDATION. 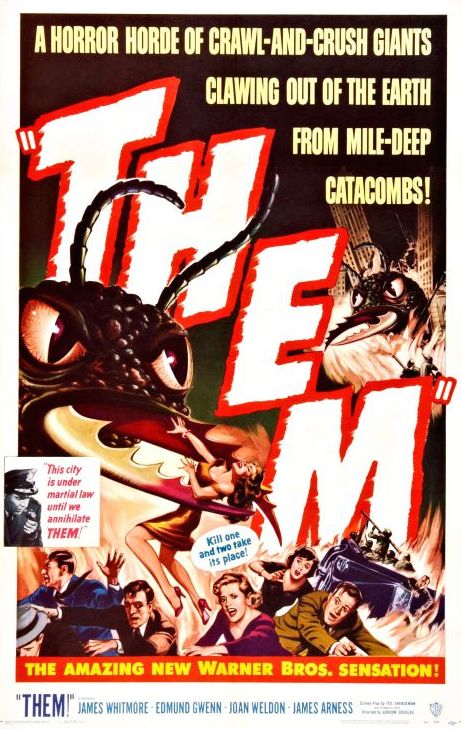