Among my many passions can be counted the adventures of James Bond in both prose and cinematic form, but my real interest in the character lies in his literary incarnation. The Bond of the movies is for all intents and purposes something of a superman (that trait beginning in earnest with 1964's classic GOLDFINGER), but his literary antecedent would surprise those unfamiliar with the books by being, as my friend Kevin so concisely and accurately put it many years ago, "a fucking mess." The Bond of the books is a borderline alcoholic, chainsmoking sadistic asshole, not at all like the fantasy figure found in the films, and he fascinates because of his very human failings while serving as a combination investigator/hitman for Her Majesty's secret service. Prior to the advent of the 007 movies, author Ian Fleming's novels enjoyed great success worldwide and even counted President John F. Kennedy among their avid fans (1957's FROM RUSSIA WITH LOVE reportedly being his favorite among the novels), so the character and his author's signature prose style were very much in the public consciousness and anything that gains such a measure of public familiarity is destined to at some point fall prey to parody. That would have been no easy feat at the time of the novels' releases, due in large part to the then-extreme levels of sex, violence and sadism that defined the series and rendered some of the books downright controversial in some circles. Thus it fell to a respected organ of humor produced by collegiate scribes, namely the Harvard Lampoon, to give Fleming's work a much-needed satirizing, and the result was 1962's ALLIGATOR, a dead-on parody of the Fleming oeuvre that's so on target that it's barely distinguishable from an actual James Bond novel, save for a few moments of quite ludicrous exaggeration of Fleming's stylistic tropes. 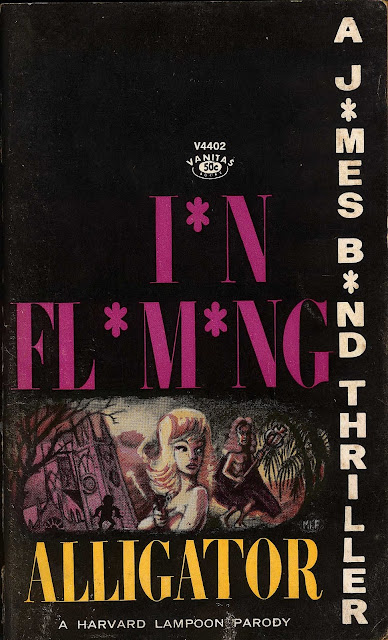 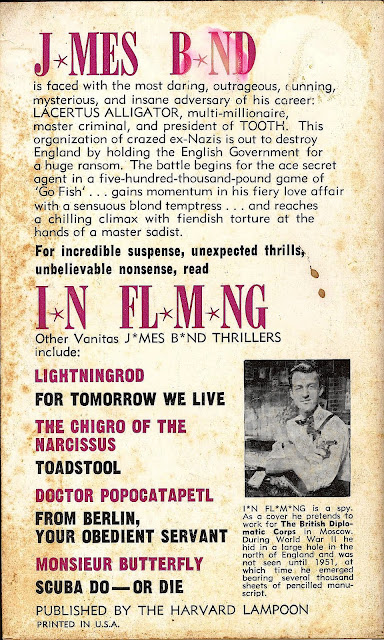 Back cover to ALLIGATOR.


To those familiar with the Bond editions as they appeared in the 1960's (the versions I grew up with), the first thing to notice about ALLIGATOR is its flawless mimicry of the series' cover design style, right down to the cheesy author's photo on the back, and once the reader dives into the text, it even reads just like a Fleming novel. The plot is a hash of several elements that will be familiar to the experienced Fleming reader (this book is not advised for those unfamiliar with the 007 novels since it is such an accurate stylistic parody) and details J*mes B*nd's clash with Lacertus Alligator, an over-the-top megalomaniac whose freakish physical attributes (including a mouth full of sharpened steel teeth) go hand in hand with his behavioral quirks (such as sating his fetish for the color purple by constantly whipping out a spray can of purple vegetable dye and liberally applying the pigment to anything and everyone around him). Alligator would be very much at home among such villainous Fleming creations as Hugo Drax and Doctor Julius No, only in this parody he brings to mind how Chuck Jones or some of the other classic era Warner Brothers animating directors might have handled such a figure with their trademark satirical flavor.

B*nd is brought into direct conflict with Alligator when B*nd's boss, *, recruits him to discover if Alligator is cheating at cards at an exclusive London men's club (a plot lifted directly from Fleming's MOONRAKER) and once B*nd takes the villain for an outrageous sum of cash, the agent is assigned to investigate the murder of a British intelligence section head in Bermuda (a nod to the plot catalyst of 1958's DR. NO). That seemingly routine assignment soon spirals into the expected web of sex, violence and mayhem that one has every right to expect from a 007 yarn, and it's all communicated with astonishing brevity since the book is but a mere seventy-seven pages in length (which is just fine because a goosing of Fleming's storytelling could easily be achieved in short order by a talented parodist). But while it's a great idea to give the world a knowing spoof of the Fleming books, the problem with ALLIGATOR is that it simply isn't funny. It hews far too close to its source material and other than a few moments having fun with B*nd's general arrogant assholism, Alligator's bizarre/insane villainy and B*nd's in your face and totally irritating flaunting of his epicurean leanings, there's nary a chuckle be had, and what little laughs are generated depend heavily on the reader's intimate familiarity with the ten 007 books ranging from 1953 through 1962. When all is said and done, ALLIGATOR is best left to Bond completists and curiosity seekers who want to check out just how closely a writer can ape one author's style.

Having been an avid collector and reader of Fleming since my early teens, I picked up a copy of ALLIGATOR a little over thirty years ago but never got around to reading it in full becuase I didn't get what it was going for at the time, a lack of understanding stemming from only having read the first two or three of the original novels, so I set it aside to be read at some later time. During the years since those formative days, I lost my copy of ALLIGATOR and pretty much forgot about the book's existence until recently, shortly after re-reading all of the Fleming novels over a two-year period, so I recently found the cheapest copy I could get on eBay for around $36. Simply put, it's an item of interest, but it wasn't worth the wait or the cash expenditure. Save your money or shell it out for a worthy parody, such as the infinitely better and frequently hilarious BORED OF THE RINGS (1969), written by Henry N. Beard and Douglas Kenney, both founding editors/contributors of the NATIONAL LAMPOON magazine. Doug Kenney notably wrote "First Blowjob" for the magazine and later co-authored NATIONAL LAMPOON'S ANIMAL HOUSE with Harold Ramis and Chris Miller, so that'll give you an idea of how funny that guy was (Kenney died as age 32 in 1980 after a fall from a cliff in Hawaii, a death that may have been a suicide).
Posted by Bunche (pop culture ronin) at Monday, April 05, 2010

I agree that Bored of the Rings is a fantastic book, and it makes me nostalgic for the days of clever parody, not like the movie parodies of recent that are worse than the source material.

The only Bond novel I've read is Live and Let Die, which has some interesting moments but never sucked me in. For some reason, though, the breakfast scene in Jacksonville (I believe) really stuck with me. I guess I just like a good paragraph about pancakes.

Inflaming. Hee. No one can make fun of Fleming enough - or fondly enough.