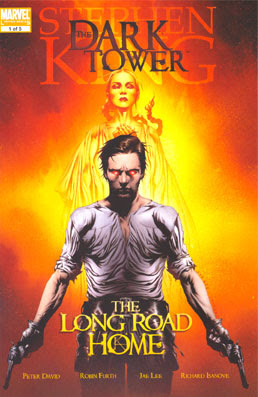 About a million years ago (translation: the 1980's) I attempted to read Stephen King's THE DARK TOWER: THE GUNSLINGER and despite being rather a rabid King fan at the time I simply could not make it past the first thirty pages or so. The writing was turgid and the setting was an ill-assembled pastiche of Western/horror/fantasy that just did not grab me. Along with EYES OF THE DRAGON, a collaborative effort with Peter (GHOST STORY) Straub, the first DARK TOWER novel was the moment when I began to feel the King teat had finally gone dry (an opinion proven wrong by what I feel remains his strongest work, PET SEMETARY, which saw print a year after THE GUNSLINGER in 1983). But as the years progressed the DARK TOWER books kept on rolling out and some of the die-hard King fans I knew sang their praises, so I once again attempted to get through the first installment and once again I failed. It all seemed like a pretentious mess to me, and that in order to comprehend it at all one would have had to have it personally explained by Stephen King himself. That said, I left the series alone and held no further in it.

Skip ahead to the present and the arrival of my latest package of books for review from a certain major publishing industry weekly periodical, and the discovery that my latest assignment included a Marvel Comics hardcover graphic novel based on the concepts and characters found in the DARK TOWER series. As you can probably imagine, I was less than thrilled with the prospect of having to read it, but it was a paying gig and I'd read lots of truly horrible graphic novels during the course of my association with the magazine, so even if was was bad I'd probably endured far, far worse. That supposition proved to be true, but lemme tell ya, I sure as shit earned my check with this one.

DARK TOWER: THE LONG ROAD HOME is an original story co-authored by DARK TOWER mega-fan (which explains a hell of a lot) Robin Furth and Peter David, scribe of some of the best work ever seen for the ongoing INCREDIBLE HULK comic book, with art by Marvel mainstay Jae Lee (who rose to fame on a NAMOR run that I was particularly annoyed by) and colorist Richard Isanove. In a departure from the art style I remember from his days on NAMOR, Lee channels his inner John Bolton and turns in some very nice artwork that greatly benefits from Isanove's contribution, but other than that I don't really have much to say about the book's narrative merits. This story is completely and totally incomprehensible unless you're very familiar with the particulars of the DARK TOWER series, which totals seven volumes. There are all kinds of references to what's come before and odd terms and phraseology that I guess are part and parcel for the books, but without a road map to guide the uninitiated reader it's all word soup that apparently has something to do with the gunslinging hero, Roland — one of the blandest leading men I've read about — and his two companions avoiding some guys who are out to kill them, but Roland falls victim to Maerlyn's Grapefruit, a magical Cthulhuesque eyeball thingie that sucks away his consciousness and reveals to him all manner of "scary" and "portentous" shit that frankly bored me to tears. In fact, I don't even have enough interest in it to discuss it any further other than to say that if you were able to make it through the source novels and actually enjoyed them, then you may like this book. I freely admit that I am absolutely the wrong person to be reviewing this, so please take my opinion with a grain of salt; I love the WILD CARDS books, but I know plenty of people who fucking loathe them (and to be fair I can understand why), so it takes all kinds (and the comics adaptations of those novels are best used as compost). But if you, like me, are a DARK TOWER layman who is at best apathetic about pursuing it, give this a miss and spend your $24.99 on something else.
Posted by Bunche (pop culture ronin) at Saturday, November 01, 2008

I made the mistake of buying the premiere issue of this last year (The Gunslinger) simply because the talent involved made it a can't miss proposition in my mind.

Boy, was I wrong.

This is easily the second worst comic I've read in the last decade (after the execrable "Anita Blake") and a thorough waste of Jae Lee.

Everyone involved should be ashamed of themselves.

I checked this out from my local library (great place for GNs & not spend a dime)could not finish it just returned it,