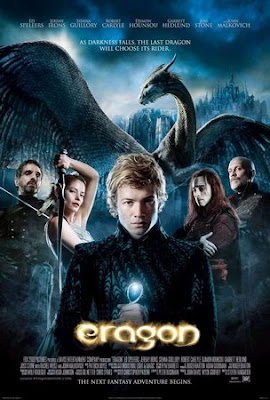 This is going to be one of the shortest reviews I've ever posted, simply because there's not much to discuss about this one. ERAGON was a post-LORD OF THE RINGS would-be fantasy epic about a humble farm boy's discovery that he's the last of the Dragon-Riders and must overcome an evil overlord whose cruel grip is blighting the land. He's telepathically bonded with a dragon and over the course of the story they come to rely on each other as a team, and while there's potential for a halfway decent story in there somewhere, ERAGON mines just about every fantasy genre cliche of the past seventy years (at least) to come up with what may be the single most derivative example of a genre not exactly known for its originality. As I watched it I found it impossible to simply experience the film on its own merits and instead found myself mentally ticking off where each element of the story was seen previously, a tally that proved disheartening with each scene since something blatantly lifted from a well-known pre-existing source turned up almost faster than I could believe. The funny thing is that even if I hadn't been as familiar with the minutia of the fantasy genre as I am, I would have found the entire film a case of "been there, done that" nonetheless thanks to all of its elements having been fodder for movies, television, novels and comic books in general for ages, so unless you have a burning desire to see a literal catalog of heroic adventure by rote I urge you to give ERAGON a pass and read a good fantasy book instead. (I recommend any of Fritz Leiber's Fafhrd and the Gray Mouser stories, and there's a gorgeous graphic novel collection of some of them drawn by Mike "Hellboy" Mignola, so search it out!)
Posted by Bunche (pop culture ronin) at Tuesday, November 25, 2008

Ya know, everyone was going on, on how a kid wrote this book and it's so awesome etc.
But here's the thing:
A KID wrote this book. And it sucks and is more derivitive than any Harry Potter script.
(The character Harry Potter is from the first TROLL movie! Well maybe not the same character but still! But at least HP FEELS magical and cool)

I have YET to be able to sit through this mess. And we own it.
I'd prefer to watch all 3 High School Musicals, instead.

Sadly,I am one who LOVES anything dragon and this movie bored the shit out of me. I would almost rather have watched the horrifying Dungeon & Dragons film then experience the dullness that is Eragon. At least D&D was so over the top you could laugh through it - Eragon takes itself way too seriously and ,yeah, the book sucked as well.

I saw this of a plane. It worked better than Ambien.

I think, if anything, your review was far too kind. Truly a boring piece of shit....

We also own a copy of this movie and ours was defectively scratched from the first time we watched it. My daughter (who has a crush on Harry Potter and cried during MouseHunt) didn't even give a crap. Have no idea how it ends, we moved on.