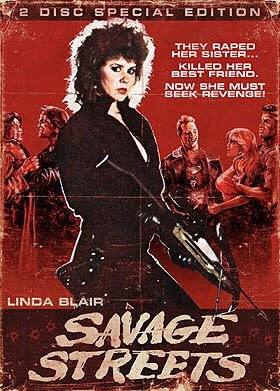 I saw SAVAGE STREETS when it came out back in 1984, and for no good reason I've held it in considerable esteem ever since. It's a pretty much by-the-numbers revenge exploitation flick about a bunch of overage-looking high school "bad" girls led by Linda "cross up the snatch" Blair who run afoul of a cheesy gang of thugs called the Scars. This bunch of meatheaded dudes drive around and antagonize the general public for kicks while influencing a nebbishy nice kid (Johnny Venocur) who joins their ranks in an attempt at becoming "cool," but the young man's journey takes a disturbing turn when his Alpha male cohorts decide to revenge themselves upon Blair and her girlfriends by kidnapping her adorable and innocent deaf younger sister (scream queen Linnea Quigley) and violently gang-raping and beating her on a grungy high school bathroom floor (not a sequence for the faint of heart or easily offended). Once Linda finds out what's happened to her sister (to say nothing of the sadistic murder of her soon-to-be-married best friend), she gears up in a black jumpsuit, gets her hands on a crossbow and goes a-huntin' for the testosterone-drenched gang scum. Needless to say, their fate ain't pretty.

SAVAGE STREETS is a garden variety and ever-so-'80's revenge opus made notable by its ludicrous dialogue, flagrantly too-old "teenagers," an incredibly bleak and nasty tone, and the presences of a slumming Linda Blair and John "Dean Wormer" Vernon, and while I find it fun for its sheer crassness value, there are certainly much better examples of the revenge flick genre to be had (the original DEATH WISH comes to mind). So why put it out in a 2-disc special edition? I have no idea, and the extra material is in no way worthy of a second disc. There's a so-so "making of" segment that has some fun insight from Blair (commenting on what I believe was her first topless scene) and Quigley (whose character endures one of the worst rape scenes this side of I SPIT ON YOUR GRAVE , a sequence that had to be considerably trimmed to garner an R rather than an X rating), but the commentaries are pretty uninteresting, particularly the one featuring the incredibly annoying wishes-he-were-as-amusing-as-he-thinks-he-is Johnny Venocur.

So if you do decide to pick up SAVAGE STREETS, skip the second disc and watch it the way it was meant to be seen: in a dank basement, surrounded by a gaggle of liquored-up and like-minded sleaze junkies. You could do a lot better, but you could also do a hell of a lot worse. And unless she's made of very stern stuff, DO NOT convince your girlfriend to sit through this one. That rape scene's a potential relationship-ender, and if you ask me the revenge doesn't even come close to being severe enough for the damage done to a cutesy-sweet girl who looks like she should be a regular on SESAME STREET.
Posted by Bunche (pop culture ronin) at Friday, November 07, 2008

I made the mistake of watching "I Spit on Your Grave" with some buddies and my girlfriend of that time. Somehow, she didn't break up with me.

There were a bunch of flicks like this that were fun: "The Exterminator", "Vice Squad", "Angel", "Alphabet City" and "Ms .45" spring to mind. I suppose you're right in assuming that the original Death Wish started it all, but "The Warriors" was also equally responsible for the tone and attitude of that particular brand of trash, in my opinion.

I recall one critic's comment about that film: "For whom is THIS entertainment?"

"I Spit On Your Grave" has the best castration scene this side of "Make tHem Die Slowly"!