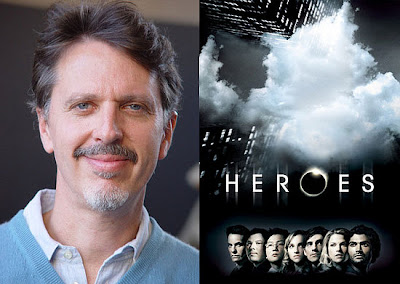 When HEROES debuted on NBC two seasons ago I was psyched to see an intelligent and fun superhero show running on primetime, even if it was more or less the X-Men minus Professor Xavier. Then came season two, creative somnambulism and a season-hobbling writers' strike, and once the strike was resolved series creator Tim Kring publicly admitted that the show basically sucked and that he was taking steps to bring it back up to scratch. By that time I'd only seen perhaps four episodes of that season and decided to wait until things were resolved before I got back into HEROES, but that day has not yet come and season three is currently in progress, regularly being cited by people I know who still watch it as being listless and going nowhere. Then, just the other day, Kring decided to weigh in on the state of the series and ended up saying some majorly stupid shit in general and insulting the people who made his show a hit in the first place, namely the viewers, all on the public forum of IGN.com. I knew nothing about this, but my friend of thirty-one years, Tom Petrone — a pop culture geek to rival Yer Bunche if ever there was one — , filled me in on the foofaraw and kindly sent me the following open letter to Kring that he'd drafted and sent to various online sites. Take it away, Tom:

In yesterday's newspaper, I read that the creator of HEROES, Tim Kring, stated that due to the advent of DVR and Online streaming, the way people watch Heroes has changed. Therefore,  in the future, the show will be less serialized, and each episode will be more insular. This, I think is a good thing and may break the series out of this maelstrom of plot elements and new characters that are turning the show into a Greek Salad of confusing elements.

Then, Tim Kring was quoted as saying that people who still watched the show on its initial network telecast were "saps and dipshits who can't figure out how to watch it in a superior way."

Mr. Kring, I hope you're reading this because, as a fan of the show from EPISODE ONE,  I'm absolutely flabbergasted and downright pissed off at your shitty attitude. That was a pretty lousy way to refer to people who have loved and supported Heroes. Even though the quality of the show has eroded a bit more each year, we stuck with it. Even though the charm and unique approach that separated this show from its contemporaries has evaporated into a mess of divergent ideas, we stuck with it. Why? Because we loved the characters and saw the potential the show has (or had, depending on your viewpoint).

Not anymore. You sound like a pompous, self important egotist for insulting your viewers like that. How dare you! How dare you alienate people who are loyal viewers, who've stuck with the show all this time. Who gives a shit how we watch it, as long as we're watching it! You arrogant, vainglorious piece of rodent excrement!

We will never watch your show again. Not a great sacrifice, since its gotten so muddled and virtually incomprehensible this year, that it's practically unwatchable anyway. Driving away the people who've built up the show to what it is (was), will all but guarantee the show's eventual cancellation. Which looks like what you might want to have happen anyway, judging from your petulant swipe at the show's  fanbase. And firing more producers at this point would look like rearranging deck chairs on the Titanic, as they say.

I wonder how many other fans appreciate being called saps and dipshits. Maybe when the ratings fall again, you'll see that folks don't like to be insulted for no reason...asshole!

This Petrone guy hit the nail on the head!

Add 'Douchebag' to 'Derivative' and 'Dull'.