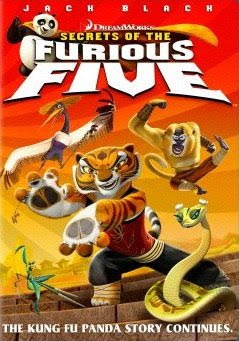 Now that the excellent KUNG FU PANDA has made its way to DVD, the film's creators saw fit to supplement it with an additional disc featuring the motivational origin stories of the Furious Five. Now I don't know about your own personal experience with straight-to-video sequels and add-ons to hit animated flicks, but I can tell you that the vast majority of them — mostly from the Disney greed machine — are pieces of shit designed to rip off parents who buy them at the behest of their kids, a cruelly-exploited audience whose critical capacity is satisfied by bright colors, bouncy tunes and familiar characters. These "product" features are well aware of this and little if any effort is put into actually creating a story of any worth, and in my opinion it's downright criminal to give children a story that isn't worthy of their dreams and imaginations.
Apparently the people behind KUNG FU PANDA feel the same way I do, because the supplementary DVD that comes with the source movie is every bit as involving and magical as the original.

At some unspecified time after the events of the first film, Master Shifu (Dustin Hoffman) enlists "Dragon Warrior" hero Po (Jack Black) for a mission of utmost hardship: instructing a class of very young beginner kung fu students, each of whom is an adorable little bunny. Having not even the slightest clue about teaching the martial arts, Po is somewhat daunted by his task and the class' foaming-at-the-mouth desire to learn all there is to know about kicking ass, but once he's gotten the kids to settle down he appeals to their interest by detailing the hitherto unrevealed origin stories of his martial seniors, the Furious Five. Once he's got their attention, Po imparts the value of patience, confidence, courage, control and compassion to his charges, and they absolutely get what he's laying down. The back-stories of Viper, Mantis, Crane, Tigress and Monkey each have their merits — although, to be frank, Monkey's is by far the weakest — and having studied martial arts much of it really spoke to me, and in the cases of Viper and Tigress I was actually moved to tears.

SECRETS OF THE FURIOUS FIVE is simply excellent, and at a running time of around a half hour it's a model of storytelling economy that holds the viewer riveted from start to finish. But while it's short and sweet, the brevity only left me wanting more; there was so much going on here that I feel it could have gone on for another hour and still retained its high level of quality, but maybe the filmmakers knew exactly what they were doing and are stoking the fires of anticipation for the first of several big-screen sequels. If they can keep up the quality established in the first film and continued here I will be very happy indeed, so I just hope the KUNG FU PANDA franchise doesn't end up crashing and burning like the horrendous SHREK sequels. Let's keep our fingers crossed.
Posted by Bunche (pop culture ronin) at Thursday, November 06, 2008