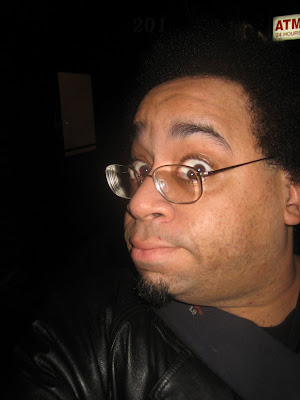 6:00 AM-Yer Bunche on line to vote in Park Slope, Brooklyn.
I've been asked by an old friend/colleague (Kevie) about what my take on the 2008 election is, and while for the most part I try to keep this site somewhat apolitical, it's fairly obvious to anyone who reads it that I'm most easily pigeonholed as a liberal Democrat. Here are the pertinent facts that make up who I am and how I think on this stuff:

I'm forty-three years old, black and a child of the bizarre historical era that encompassed the majority of the Viet Nam conflict, the post-hippie excesses of the 1970's and disco, and the Reagan years. I’m pro-choice, anti-racism/sexism/homophobia, and quite staunchly anti-war, especially so against wars that were fomented with paranoia, hatred and outright lies, serving absolutely zero purpose, racking up nigh-unimaginable debt and getting the country’s youth mutilated and blown into sandwich spread. I’m against a governmental status quo that’s largely been maintained by white men of power and moneyed privilege, people mostly looking out for their own interests and those of folk just like them, basically being totally out of touch with and unable to relate to much of this nation’s populace. Yes, I’ve been aware of America’s reputation as a magical land to which immigrants can flock from whichever land they choose to leave (flee) and achieve greatness on these hallowed shores, and while that is true in theory the reality is more often than not something quite different altogether as this country was built upon those ideals, only those goals were frequently, tragically attained through the committing of atrocities that left the common man still quite common, women marginalized at best, immigrants with weird accents and people of color seen mostly as sources of pop culture amusement/sports glory/domestic labor, and, in the case of Native Americans — or as my maternal granddaddy, Ozane, called his own, “Injuns” — , damned near total genocide.

Yeah, it’s a total fucking bring-down and perhaps a somewhat oversimplified view, but that’s the fact, Jack. And that’s why I got my beige ass out of bed at five-thirty this morning, shat, showered, shaved and trotted over to P.S. 282 (with the lyrics to "Douche and Turd" running through my brain) to let my voice as a registered voter be heard. And much to my delight, the line stretched out of the school and onto 6th Avenue, then wrapped all the way around the block and onto 5th Avenue. When I exited at roughly 7:15 AM, the line was even bigger. 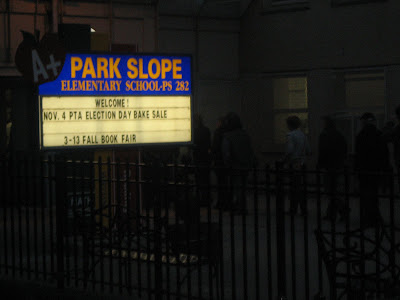 When this whole McCain vs. Obama thing got started I have to admit that I was psyched to see some suave black dude not only running for president, but also conceivably having a shot at winning, and when I really sat down to think about that as something I’ve been told since childhood was a distinct possibility of happening, I was stunned. My own growing up years pretty much sucked ass — you try being one of a handful of black kids in Westport, CT. from the time you were seven in 1972 through leaving for college in the Fall of 1983 and see how idyllic your formative years would have been — and though I dealt with undisguised racism during that period, I still believed a lot of the promises made by teachers and other authority figures, so it stood to reason that I would someday see a president who at least superficially looked like me. But as I grew older and saw the American government ruled by ossified (and possibly senile) old fucks doing their damnedest to hold onto an “Ozzie and Harriet” lifestyle that had little or nothing to do with me or anyone else I knew, my anticipation of a huge Jim Kelly-style Afro in the White House took a seat on the back burner (sorry, but Andrew Young's 'Fro just didn't count). Reagan, Bush the First and Dubya all filled me with a deep loathing and distrust of our Commander-in-Chief, and by the last election night I was more than just completely fucking sick of the Republican agenda and simply wanted them gone from my sight, preferably thrust bodily into a very deep and toxic waste-filled abyss from which they would never return, shoved down there by some equally pissed-off spirit of outrage that looked like some mighty giant monster come to set things right.

However, my own experiences with the more disappointing aspects lying behind the veil of the American Dream pale in comparison to those of my mother, born during the great depression in the segregated South and, though tough as a motherfucker, rather scarred and bitter thanks to what she’s been through. It sucked bad enough to be a woman when she was growing up, but as a black woman, even as highly- educated as she was, her opportunities in her post high school life were limited to:

So you can imagine what a kick in the head it has been for her, a kid during the days of lynchings and “whites only” drinking fountains, to witness Civil Rights, Women’s Lib and more. And now there’s a black man running for the country’s highest office, and she’s immeasurably happy. She’s been absolutely riveted to MSNBC for months, taking breaks from the political coverage only for DANCING WITH THE STARS and the occasional mystery show on PBS, and was moved to tears when Barack Obama bagged the nomination. She called me up weeping and blurted out, “Son, after all the shit I’ve seen and been through I never, ever expected to see a black man run for president in my lifetime.” That’s some pretty powerful shit, and I wish that more of the current generation of black American youth could understand what Obama means to those of us who came before. But I did see a fuckload of us on line at P.S. 282 this morning, so that fills me with hope. In fact, I don’t think I’ve ever seen more smiling brown faces in one place in my entire life. (Well, maybe at the Jacksons stadium show I saw back in the mid-1980’s, but that’s obviously for totally different reasons.)

And it also amazes me to see the amount of support Obama is receiving from white voters. Sure, there was a time when I believed that Obama’s acceptance from white folks had a lot to do with so much of American black culture being assimilated into the fabric and mindset of the nation in general, but fuck hip-hop being enjoyed by white folks for nearly three decades; the bottom line here is that I think white folks are finally fucking sick of the same status quo bullshit that’s pooched this country right up the ass for a long time, and hopefully they are as tired of seeing Lady Liberty getting abused and gang-raped as much as the rest of us are.

So, to sum up, I’m on board for Obama in anticipation of the much-heralded change that his administration will hopefully bring, but my main aim in helping him get elected is to get that pack of fucking liars and war criminals out of office. If Obama were not up for the presidency and we were instead offered the choice between John McCain (and the utter anti-feminist bad joke that is Sarah Palin) or a truckload of dead rats in a tampon factory, I would have to cast my ballot for the latter.

If you haven’t gotten out and voted, please head to the nearest polling location and exercise your rights as a citizen. Let’s hope this turns out well, but this shit ain’t over ‘til it’s over, and I’m gonna have a beer at the ready when the results are finally tabulated, whichever way it turns out. Pray for our nation folks. Pray for our motherfucking nation…
Posted by Bunche (pop culture ronin) at Tuesday, November 04, 2008

Couldn't have said it more eloquently than you, old friend :)