IN THE WORDS OF DR. SAM JOHNSON: "HE SAID THE SHERIFF IS NEAR." 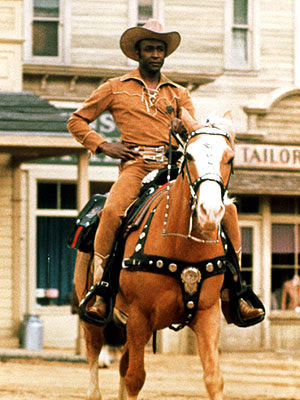 Sheriff Bart arrives in Rock Ridge to deal with some serious shit.
That's right, folks. There's a new sheriff in town and he's got some serious shit to deal with, what with having to fix the past administration's legacy of toxicity and all. But unlike Sheriff Bart in Mel Brooks' classic examination of Western genre tropes and racism, BLAZING SADDLES (1974), Barack Obama was ushered into office with the happy and willing aid of one hell of a shitload of white folks. No "up yours, nigger" for him, but rather the polar opposite, and with such a show of the nation perhaps finally waking up and not giving a shit about race I'm given a bit of hope for not just the government, but also for the people of America. Maybe we'll finally see some of the promise about this country that's been hyped since day one put into effect as something other than self-congratulatory rhetoric.

Heh. Still my favorite scene from that classic...

"The sheriff is near..." Heh. I wonder if anyone has the balls to write a scene like that nowadays.

I always assumed Richard Pryor wrote that scene by the way...

To answer your questions:

1. Writing a bit like "the sheriff is near" isn't so much a question of balls these days, but rather a question of being able to get away with it. The closest I've seen to it in recent years was a MAD TV bit involving a candy bar for police-harrassed blacks called "Sniggers."

2. Though Pryor's involvement with the script for BLAZING SADDLES is public knowledge, I've never come across any documentation of which parts he actually wrote. But, speaking as a Pryor devotee and scholar for thirty-three years (I was ten when I secretly listened to "Was It Something I Said?"), I'd bet good money that he came up with all of the jokes involving the use of "nigger." They not only sound exactly like his signature turn of phrase, but much of the humor of that dialogue clearly comes from it being scribed by someone who had definitely been on the receiving end of such verbal abuse, which Richard definitely had. For me this is nowhere more clear than when Sheriff Bart politely greets that old lady and she returns his friendliness with a curt "Up yours, nigger." Oh-so-right.

And, sadly, there are plenty of troglodytes who are VERY unhappy about this election. Look for a renewed interest in white sheets and The Turner Diaries over the coming four years.(*)

And Ted Nugent is finally gonna have to shut the fuck up. That's PRESIDENT Punk to you now, dickweed! Now put those guns away or talk to Mr. Secret Service Man.

(Hmmmmm... there's some justice for you. By their own reasoning, certain "patriots" may soon become prime candidates for the "interrogation techniques" they've been so eager to inflict. Not that I think Obama would do that, mind you, but there's a certain poetic quality to the thought.)


-------------
* - Now THERE'S an amusing though: set up a company to reprint The Turner Dairies and other racist shit, then make that company a non-profit benefit corporation set up to oppose hate crimes. That way, the fuckers fund their own opposition. Sweet!

When I mention the name Samuel Johnson to my TV friends and cite some pithy quote, they assume I'm talking about Samuel Jackson.

Clearly the script was a collaborative effort... Think Pryor had anything at all to do with the ending and the gay song and dance bit? I seriously doubt it. That was definitely one of the other guys (Mel probably)...

"I wonder if anyone has the balls to write a scene like that nowadays."

(not meant to disparage the brilliance of Saddles in the least)

You're absolutely right, although I was thinking more in terms of something generated from a mainstream Hollywood studio. God, I love Sarah Silverman...

This movie rocks on so many levels. I would LOVE to use it in my teaching...

Right after we got news that Obama won, my spouse and I discussed Blazing Saddles..

Thanks for bringing it up on your blog!