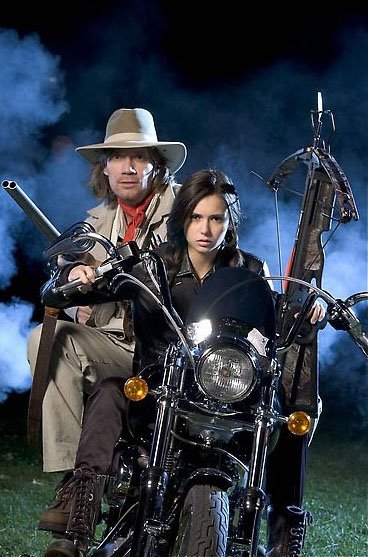 When you see a publicity photo like this, you know exactly what you're in for.


I thought I'd seen the nadir of derivative genre clonings when I endured ERAGON the other night, but boy howdy, was I ever unprepared for NEVER CRY WEREWOLF, an almost impossibly-shameless ripoff/remake of the 1985 vampire classic FRIGHT NIGHT, only minus all of that film's wit and originality, and each instance of vampiric lore replaced with every werewolf trope in the book. In fact, it's such a fucking swipe-job that I laughed out loud throughout its running time and repeatedly uttered "You've gotta be fucking kidding me!' at the screen as the bald-faced knockoff unspooled, in other words it's almost worth seeing because its shamelessness is hilarious.

Note that I said "almost."

FRIGHT NIGHT told the story of an awkward teenager who realizes his personable new next-door neighbor is actually a vampire, and with the help of his at-first-disbelieving girlfriend and weirdo/dork best friend sets out to stop the supernatural predator before the vampire kills him. During the course of this mishegoss, the kid also enlists the services of a washed-up TV personality to aid in his errand of execution and all hell breaks loose in the finale. Everything you just read in the my FRIGHT NIGHT capsule synopsis occurs in NEVER CRY WEREWOLF, as well as assorted minor plot details such as the teen spying on the monstrous neighbor and witnessing the creature killing a hooker, the washed-up TV celebrity — in this case HERCULES: THE LEGENDARY JOURNEYS' Kevin Sorbo subbing for Roddy McDowall — being confronted with shocking evidence that monsters really do exist and the monster putting the lead's significant other in their hellish thrall, with the only real difference of note being that the monster's a werewolf (who resembles a defective gene-splicing of Gary Sinise and Hugh Jackman) and the protagonist is a girl. The whole damned thing is ridiculous and even though FRIGHT NIGHT successfully trod the often thin and uneven line between comedy and outright horror, NEVER CRY WEREWOLF fails to provide either intentional laughs of legitimate scares, so you, the viewer, lose. TRUST YER WEREWOLF-LOVIN' BUNCHE and give this waste of time and film stock a miss and instead check out a werewolf movie actually worth watching, namely Neil Marshall's instant classic from 2002, the superb DOG SOLDIERS.

And one last thing: exactly how did the makers of this film get away with so flagrantly ripping off FRIGHT NIGHT and not get the living shit sued out of them? 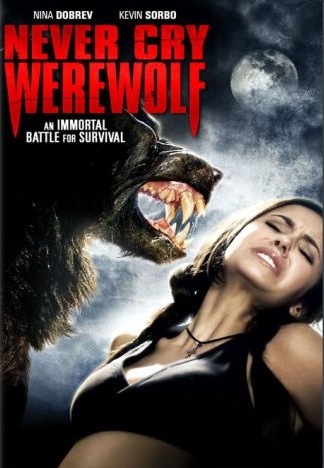 I guess ripping off a plot is not considered a litigious action. How else did all the Jaws rip-offs from the 70's and early 80's get away with what they did?

Grizzly particularly comes to mind as being a similar case as this movie you're reviewing here: it ripped off Jaws plot point for plot point substituting "Bear" for "Shark" and obviously got away with it.

I suppose it's a good thing since 90% of all trashy exploitation movies would've never gotten made if they were going to get sued for imitating the genre-starter.