WAKING UP WITH THE TRACK RABBITS 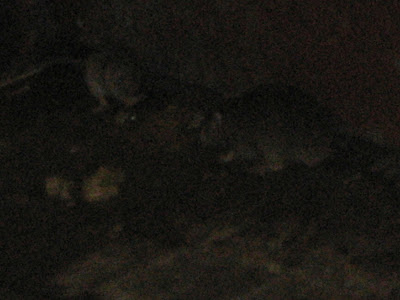 Some of the utterly brazen rats at the 34th Street R train platform, captured this morning in their natural habitat. (Sorry about the questionable quality of the photo, but I couldn't get any closer or they would have beaten me up, stolen my backpack and mocked me for being a pussy.)
In the nineteen months I've commuted to the design 'ho house from Brooklyn, I've ridden in the first car and marveled at how every day without fail I see at least three huge rats gambol by the open door when the R train waits in the 34th Street station as passengers enter and exit. This magical vantage point looks out onto a closed and chained door to what appears to be a repository for the platform’s garbage, and as such it’s the perfect haven for hordes of peckish and undiscriminating plague-bearers.

Rats — or "track rabbits" as they are affectionately known — are not by any means an uncommon sight to the everyday straphanger, often providing amusement and helping the wait between train arrivals to pass with displays of territorial fighting, scrounging for scraps of rotting food that would make a buzzard blow chunks, or my favorite, impromptu and vigorous live sex acts involving much thrusting and squealing, accented by the endearing-yet-horrible sight of enormous, hairy rat nuts bobbing obscenely during the rodential coitus. I find the antics of the track rabbits both fascinating and funny, and that blows my mind because when I encounter rodents in my apartment — thankfully just the occasional mouse, as is unfortunately common for my building — I tend to lose my shit; some people primally freak the fuck out at snakes, spiders or roaches, but the critters that make me don a dress and hop up onto the nearest tall piece of furniture are mice and rats. I know they’re small and all that, but for some reason they just get to me when seen out of a subway context.

Anyway, I know I’m not alone in my daily enjoyment of the track rabbits because every morning still-groggy subway riders suddenly rouse themselves upon arriving at 34th Street and peer out the window or open doors in hope of witnessing the morning’s chapter in the saga of our favorite furry subway vermin. This week has been a particularly fruitful one for rat-spotters due to the door being slightly off its hinge and improperly chained, thus allowing the wee scavengers freer access than usual and they do not give the slightest fuck who knows about it. Just like their feathered, above-ground analog, the venerable and foul pigeons, these rats display little (if any) fear of man and would no doubt pummel, stab or shoot the average citizen if their stature were increased enough to facilitate the handling of the city’s easily available brass knuckles, knives and firearms, and having dispatched said citizen, the rat who enacted the foul play would riffle through his victim’s person, abscond with any cash, valuables and eats, and finally invite his fellow subway dwellers to share in the shitload of meat available from the swiftly-cooling corpse.

The rats I see each morning would never have to resort to such anti-social and downright criminal endeavors thanks to the station’s maintenance staff clearly not caring whether the place is overrun with disease-carrying pests. Seriously, the track rabbits in question don’t skitter about or run when the train pulls in; instead they stroll with a leisurely gait, look directly at the riders, and when the riders prove of no interest they sit there on their haunches, their tiny hands clutching whatever cast-off goodie they’ve found, contentedly noshing away without a care in the world, often directly under posted warning signs that tell of the latest round of poison left out to cull their legions. Fat load of good that does, because, as previously stated, I have never failed to see at least two rats at this location every day during my daily commute. I may have a deep-rooted loathing of the little guys, but they do have my respect. (Unless one of them turns up in my flat, at which point there will be much shrieking and extermination.) But when it comes to the ubiquitous track rabbits, I say live and let live since they do provide daily entertainment of a more legitimate and real form than any of the morning chat shows, and since there are no decent cartoons on when I get up I’ll take what I can get (although WTBS’ near-dawn slot of MARRIED…WITH CHILDREN reruns are certainly welcome).
Posted by Bunche (pop culture ronin) at Friday, November 21, 2008

When I was up in NYC this summer we were walking back to our hotel after dinner when a huge rat crossed the sidewalk right in front of us. My Virginia-born husband went full pussy and screamed like a little girl. I said "dude, they're like house pets around here."

Steve- love the city stories, almost as much as your industry stories...

Arlene and I had a little rat in our NYC apartment. He was truly as bold as brass for such a little fellah. I eventually built a mercy trap, built the in-between connections to a deluxe rat hotel. Even had a little wheel! Which he took to like any cute little mouse. But this guy was fierce, he had teeth half the size of his head-- I would stick a pencil eraser in an air hole and he "snapped" on it-- much like a mechanical mouse trap. So this was not a take it out and play with it, kinda pet. I used the connecting gadget as a way to get him out so I could change his bedding.

We called him "I, Clawed-ius." Eventually his trying to eat his way out of the air holes (despite using plexiglass, he might've made it-- persistent, driven little bastard) twanged our heart strings and we released him in the depths of Central Park. Again, with a "snap" he shot four feet and disappeared in the brush. Like the professional city rat he was.