I try to post movie reviews just after I’ve seen a brand new flick, so please forgive the delay in this instance. It’s taken me the better part of a week to seriously mull over my thoughts on this one and see if the reaction I had upon leaving the theater would have mellowed after much contemplation, but it turns out I should have just sat down, written this review and moved on.

Kevin Smith, the writer/director/actor wunderkind behind 1994’s blessedly vulgar CLERKS — one of the funniest films of the 1990’s and critical darling at both Sundance and Cannes — is best known for crafting comedies featuring well-written, prurient and hilarious dialogue for his incredibly sex-obsessed characters, often turning up in front of the camera as the aptly-named Silent Bob, and while his success comes from his raunchy sense of humor jibing with that of millions of like-minded fans, the majority of Smith’s movies display a surprising amount of heart and emotion not usually found in what are unquestionably “guy’s” flicks. His characters often find themselves navigating the confusing and frustrating waters of modern romance, perhaps most notably in CHASING AMY (1997), and Smith, to his credit, is one of the few directors of his generation who can actually generate a palpable sense of what his creations are experiencing when he’s firing on all cylinders; for me his greatest romance was that of Dante and Becky in CLERKS II (by far my favorite of his movies, for the record), a sweet love story that sprouted from a memorable one night stand, resulted in an unplanned pregnancy and sank Dante’s probably-would-have-sucked-anyway marriage to a seriously boring chick (although, to be fair, it’s tough to beat the numerous charms of real-life comic book geek and NYC homegirl Rosario Dawson). While the rest of that film was pretty goddamned funny — Randall’s not-inaccurate assessment of the LORD OF THE RINGS movies nearly made me piss my pants — I doubt it would have been anything other than a color, larger-budgeted rehash of the original CLERKS if the romance angle were not present. Smith had previously flexed his sentimental side with the disastrous JERSEY GIRL (2004), a movie that basically amounted to his ode to being the father of a beloved little girl, but the film proved to be treacly and unconvincing and ending up both a critical and box office dud, so the return to his “View Askewniverse” and its cast of smuttily loquacious regulars for CLERKS II was not only a wise move, but also a scenario in which he finally got his love story right, minus the ludicrous interpersonal gimmickry that marred CHASING AMY (such as that convoluted bullshit involving occasional lesbianism and how Ben Affleck’s character suggests his bisexual girlfriend should sleep with him and his male best friend in order to fix all of their relationship issues was ludicrous, and though Smith was obviously trying to be earnest he clearly doesn’t know the first thing about real-life lesbians). 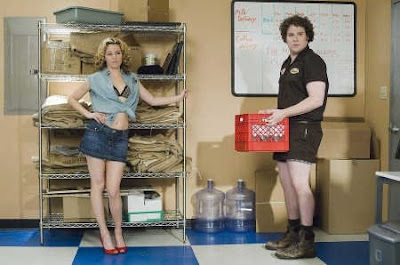 On the set of SWALLOW MY COCKUCHINNO.
So far, so intriguing, right? Well, just like he did in CHASING AMY, Smith blows it by having the characters engage in behavior that simply doesn’t make sense. I know the film is a comedy, but Smith is trying to have us buy into the crazy events of the story taking place in a reality that we all know, understand and can relate to, so to have Zack and Miri realize their love for one another as they have sex for the first time (the first time with each other, that is) on camera just did not seem plausible, no matter how much the facial expressions of Rogen and Banks try to sell it (especially a post-coital Banks). It’s one thing for two strangers to get it on for a porno, but I just could not wrap my head around two lifelong best friends in any way agreeing that it would be a meaningless happenstance for them to physically connect in the most intimate of ways, no matter how broke they were. Both Zack and Miri are likable and intelligent characters, but after getting to know them and their situation as well as we do, their coupling seemed as random and contrived as a little girl picking up her Barbie and Ken dolls and having them simulate the sex act as she understood such things to work, with no thought of actual human feelings being involved. In that sense, Rogen and Banks became plastic playthings in the hands of Kevin Smith, and while there are repercussions from the two lifelong friends having sex for what they thought were purely problem-solving reasons, the film failed to work for me from the moment when the two got it on. It all wraps up in strictly by-the-numbers ways, and considering how heartfelt and engaging it was for most of its running length that’s a damned shame.

I salute Smith for once more wearing his heart on his sleeve and trying to infuse emotion into American raunch humor, but next time I hope he actually sits down and talks to some women about how they would have dealt with whatever situation he’d be placing his female characters into. I know many very open-minded and sexually liberated women, but not one of them would have considered the situation presented in ZACK AND MIRI MAKE A PORNO even remotely believable, let alone something they would have participated in themselves. I’m just speaking from my own personal understanding of humans in general and women in particular, and I ain’t buyin’ it, but if any of you out there have a different perspective on this I would love to hear it. 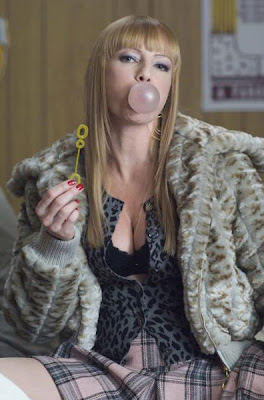 Traci Lords as Bubbles: a wasted opportunity.
Lords was somehow talked into participating in this flick as “Bubbles,” a bachelor party performer whose specialty involves blowing bubbles out of her naughty bits, and she’s okay for what she’s given to do (her introduction is priceless), but if you had someone with Lords’ built-in audience (of which I’m one) and publicity value wouldn’t you give her more than roughly four lines? Ever since ditching porn, she’s proven that she can act and that she’s pretty funny when given something to work with, so why not turn her loose on and let her go apeshit with a part like this since she was obviously willing to do it? I just don’t get it.

And thanks for giving a shout-out to "Clerks 2." For my time and money, it's one of Smith's best films - FAAAR better than I had expected it to be.

I agree with you steve, it was a waste of lords and the last half hour seemed so obvious i was hoping that the movie would go somewhere else. I personally cannot take scenes where characters who know each other forever cannot read each others moods and figure out what the problem is. these two main characters knew each other so well they finished each others sentences...so all the scenes where he or she couldnt "express" to each other a problem seemed off to me.
other than that, some fun stuff and overall a good time.