FIRST I WENT HOME FOR THANKSGIVING, AND THEN THIS HAPPENED 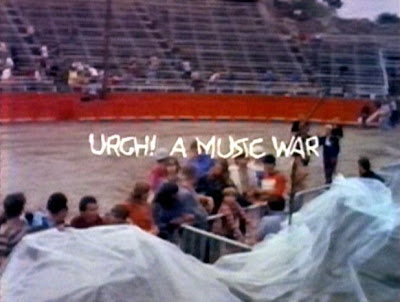 “Ever get the feeling you’ve been cheated?”
-Johnny Rotten

Yer Bunche is weary, dear readers, in both body and spirit after the usual Thanksgiving dysfunction. This year's anti-excitement included being stuck in Westport from Wednesday evening through Saturday afternoon — admittedly shorter than the usual duration — with my mom's TV locked on either MSNBC or that fucking Macy's parade (which did surprise the living shit out of me by hauling Rick Astley out of the pop music sepulchre to lip-synch; how bad is it when a show actually makes me glad to see motherfucking Rick Astley?!!?), no friends coming over except for an all-too-brief appearance by my buddy Chris and no decent marathons of old movies or vintage television to lend me some distraction from the soul-freezing inertia of being in my growing-up place, a la-la land of privilege and a certain disconnect with general reality. The one thing — the ONE THING — that got me through the first section of the seasonal surrendering of my autonomy was the knowledge that on Saturday night I’d finally get to see as rarer-than-tits-on-a-fish screening of URGH! A MUSIC WAR, the multi-band documentary cornucopia of bizarre music from my fucked-up adolescence that kind of served as a de facto soundtrack to the unsung and utterly mundane non-epic of high school hell. I went to the screening tonight accompanied by a number of good friends, most notably Chris, the only person I know who shares my passion for URGH! A MUSIC WAR with equal fervor, and we were all stoked to witness the madness unspool.

Well, lemme tell ya that I’m beyond pissed off about the screening because the thirty-four-band documentary was shorn of ten (!!!) of the performances, reducing the film to a mere ninety-three minutes and leaving myself and Chris feeling distinctly ripped off. With no indication that the print was not complete, the film played out and I did the tally in my head and noted that the movie was minus the following bits:

• John Cooper Clarke’s “Health Fanatic”
• “I’m On Fire” by Chelsea (the omission of which was particularly disheartening to Chris)
• “Where’s Captain Kirk?” by Athletico Spizz ’80 (another omission that kicked Chris square in the taint)
• The excellent “Model Worker” by Magazine
• “Offshore Banking Business” by the Members
• “Valium” by the ultra-obscure Invisible Sex, the omission of which only compounds the band’s status as being almost completely unknown
• “Birdies” by Pere Ubu
• John Otway’s wrenching performance of “Cheryl’s Going Home,” something I would have loved to see on the (relatively) big screen
• “Sign of the Cross” by Skafish, definitely the missing sequence whose omission most irked Yer Bunche because it’s fun, humorously blasphemous, introduces a new (and ludicrous) dance craze and allows the cornea-wiltingly ugly visage of frontman Jim Skafish to be emblazoned large in projected form
• Splodgenessabounds’ lively cover of Rolf Harris’ “Two Little Boys”

That’s about a full third of the movie gone to who knows where, and insult was added to injury when the end credits rolled and every one of the missing bands were listed, much to the confusion of those who didn’t have multiple uncut viewings of URGH! under their belts like Chris and myself (we’ve both seen it countless times since the Spring of 1986 when I got it on tape from WTBS’ late, lamented NIGHT FLIGHT). What began as an evening at the movies with a grin plastered from ear to ear swiftly degenerated into a huge buzz kill that not even Devo’s “Uncontrollable Urge” could assuage, and I really kick myself for opting to see a truncated version of my favorite concert movie when I had a done-deal bit of quality time with a recently re-connected old flame in the offing. There were a few good reasons for me passing up that bit of fun, but the fact remains that I could have enjoyed the wonder of that which is pink but didn’t proving yet again that I am more than a bit of an idiot.

Bottom line: if URGH! A MUSIC WAR is making the rounds to movie houses across the nation, be forewarned that you should call the theater and find out its running time before you go. If it’s the ninety-three minute flaying that I saw, rather than the two-hours-plus whole real deal, bail immediately.

God damn it, I missed sex for this! Stupid, stupid, stupid!!!
Posted by Bunche (pop culture ronin) at Saturday, November 29, 2008

About Rick Astley at the MAcy's parade...he's undergoing a surge in popularity thanks to the internet. Have you heard of "Rickrolling"? it's basically a trick by which you follow a link, but instead of it bringing up what it specified, it shows Rick Astley's "Never Gonna Give You Up". Rickrolling was one of the big 'net memes of 2008. And yes, I am sad that I know that.

What sucks most about cutting a third out of URGH! is that the resulting version is a much more obvious 'best of the new wave' film that doesn't celebrate the obscure the way the original did. I'm sure that if Klaus Nomi hadn't had a rediscovery (and documentary) recently, he'd have ended up on the cutting room floor along with Skafish and Pere fucking Ubu (not like THEY were important, right?!?).

It's like they took a time-capsule and turned it into a NOW THAT'S WHAT I CALL MUSIC! comp.