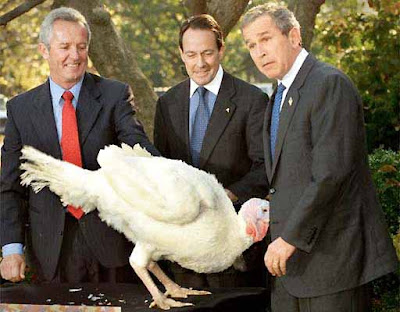 NOTE TO LONGTIME READERS: since last year's piece on Turkey Day pretty much summed up my take on the whole thing rather nicely, I'm rerunning it this year for those who may have missed it the first time around. Enjoy your festival of drunkenness and family dysfunction wherever you may be, and keep in mind that it will all be over soon!

-Yer Bunche, keeper of the Vault of Buncheness

6. Always, ALWAYS eat the turkey's tail. It's the perfect amount of dark meat, fat, and skin in one concentrated morsel, and if slathered with the right amount of gravy it's a thing of joy forever (well, at least until it's digested and re-manifests itself as the next morning's enormous post-Turkey Day turd).

And with that, Happy Thanksgiving, and may the pecans in grandma's cookies actually be pecans and not roaches. (She doesn't see that well anymore, you know.)
Posted by Bunche (pop culture ronin) at Thursday, November 27, 2008