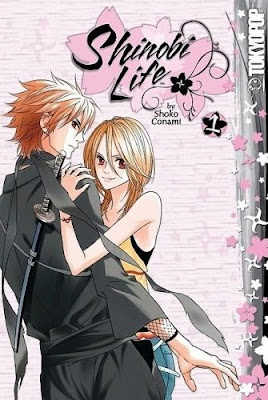 If you're one of the people who knew me twenty years ago, you'll be surprised by what I'm about to say: I hate manga. I hate manga with a deep and fervent loathing, and for the past decade or so I have scrupulously avoided it like I would avoid unshielded toxic waste. Actually I should rephrase that to state that the manga I hate is the stuff generated during the past twenty years, work from an era just after the true greats of the field had either died, retired or moved on to other things. Perhaps I'm unfairly generalizing, but much of it has an assembly line sameness and visual blandness — characters that look like unfinished manikins — that doesn't register to me as illustration, and when I'm assigned to read it in my capacity as a reviewer for a certain weekly publishing-biz periodical I dread the stuff the way I dread swallowing hemlock, so imagine my surprise when I picked up this flowery-looking trifle, read it and did not feel the urge to commit seppuku.

An object lesson in not judging a book by its cover, creator Shoko Conami's romantic tale of time-displaced love across perceived class barriers features a compelling story that paradoxically benefits from its bland “girly” art style, allowing readers to focus on the much-better-than-expected characterizations. Feudal-era ninja bodyguard Kagetora finds himself inexplicably thrown forward in time and into the dysfunctional life of bratty rich girl Beni, a dead ringer for the princess he steadfastly protected in the past. The girl even bears the same name as his royal charge and, unaware that he’s been transported into the twenty-first century, assumes she’s the same person. Sticking close to the initially reluctant Beni, Kagetora discovers a web of familial intrigue surrounding her, and as they spend time together they experience the first stirrings of attraction. But as love threatens to blossom, the pair are ripped from the present and wind up in the past, about a year after Kagetora disappeared and face-to-face with the original Princess Beni, whereupon it’s revealed that she’s the modern day Beni’s ancestor. To say more would spoil the fun, but let it suffice to say there’s enough here to hold one’s interest and possibly lure readers back for more. I won't be returning to SHINOBI LIFE, but the fact that I was able to read it without loathing it in the least speaks volumes for its merits.
Posted by Bunche (pop culture ronin) at Saturday, November 15, 2008