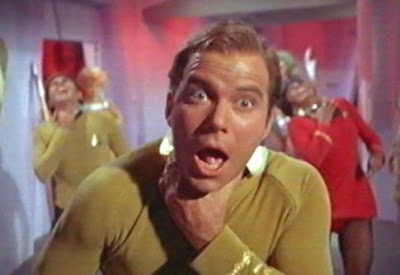 The Original Series crew, caught in the wake of Scotty after some four-alarm meat-lover's chili and a triple order of cheese fries.

My former roommate and Marvel Bullpen colleague Glenn Greenberg — the James Mason to my MANDINGO — was at the NYC preview screening for the upcoming JJ Abrams STAR TREK reboot screening last night and here's what he had to say:

I was at the NYC screening last night of four scenes from the new Star Trek movie. JJ Abrams hosted the event and introduced each of the scenes. I was in the front row and sat about 5 feet away from Abrams. The entire presentation took about 50 minutes. I was surprised by how much was shown.

Afterwards, I met Harry Knowles of Ain't It Cool News. Nice guy, pleasure to talk to.

So here's the lowdown:

JJ Abrams said right off the bat that he had never been a fan of Star Trek. As a kid, a friend of his who really loved TOS tried to get him into it, but he never connected with it on an emotional level.

He was as surprised as anyone when he automatically accepted Paramount's offer to produce a new Star Trek movie. In working with his creative team, consisting of both lifelong fans of Trek and people who had never seen the shows or the movies, he realized that he really loved the story they came up with and decided that he would not only produce it, but direct it, as well. Now, having worked on the film and gotten to know the characters and the universe intimately, he says that he truly loves Star Trek.

One of his goals, he said, was to make everything seem as realistic and plausible as possible, because, unlike Star Wars, which is set "a long time ago, in a galaxy far, far away," Star Trek is supposed to represent our future. And he wanted to show a future that the audience could relate to and understand.

It seemed clear to me that his intent was to make this film as appealing to non-fans as possible. Abrams went out of his way to explain to the audience things like what Vulcan was, what the Federation was, just in case they were not familiar with the franchise.

At one point, he was introducing one of the clips that focused on Kirk and mistakenly referred to the character as Spock. He corrected himself by saying, "No, not Spock... uh... the other guy." He smirked, chuckled and added, "No, it's Kirk--I knew it, I knew it."

All in all, I found Abrams to be pretty sincere, enthusiastic, and proud of his work and his cast and crew.

So, my thoughts based on the four clips:

- It's going to be a big, bright film with an epic scope and a lot of intense action and suspense. The woman sitting next to me even gasped and put her hands over her mouth during one of the fight scenes we watched.

- The actors seem to have been well cast.

My prediction is that the breakout character in this movie will be Zoe Saldana's Uhura. She's absolutely gorgeous--you can't take your eyes off of her. She carries herself extremely well, projects an air of confidence and ability, has a lovely speaking voice, and has good chemistry with Chris Pine's Kirk. It's a really strong performance.

Chekov provides some in-jokey comic relief, but has a really cute heroic moment where he shines.

Sulu has a major sequence with Kirk in which I think he has more to do than he did in all six TOS movies combined.

Karl Urban has a moment where he positively channels DeForest Kelly, and he does it with nothing more than a nervous raise of his eyebrow. You can tell that Urban studied at least some of the nuances of Kelly's performances as McCoy. I should note that Urban's McCoy is much more INTENSE and high-strung than Kelly's, but maybe the rationale is that McCoy calmed down a bit as he got older and more experienced.

I'm not completely sold yet on Zachary Quinto as Spock. I think I need to see a bit more of his performance before making a firm assessment. He seems okay, not bad. On a related note: As you can see in the advance publicity photo and the footage from the trailer, an angry Spock attacks Kirk. This seems to be a major story point, and it may be a reference to the fact that the young Spock was not in full control of his emotions. This may be a way to tie in with the Spock from the first pilot, who smiled, got agitated easily, and tended to shout in moments of crisis. ("The women!!!!!") Or not.

I was surprised that we got to see any footage of Leonard Nimoy as Spock, but we did. He looks old. I mean OLD. Which is odd, because Leonard Nimoy doesn't look too bad for his age. So Abrams must really want Spock to look ANCIENT in this movie. I'm not too thrilled with the Spock makeup. The eyebrows aren't consistent with what we've seen in the past, and the ears look a little too big and thick. Me, I would've tried to just recreate the look from the TV series and then add gray hair and lots of wrinkles. Also, Nimoy's voice seems much more raspy now. That said, it seems like Leonard Nimoy is having a good time playing Spock again. There's a warmth and comfort that he shows in his performance that I don't think we've really seen since STAR TREK II: THE WRATH OF KHAN.

Bruce Greenwood is very effective as Captain Pike. His performance is more or less consistent with Jeffrey Hunter's.

Finally, Chris Pine seems effective as James Kirk. As with Quinto, I'm not completely sold yet, but I could be, once I see more of his performance. He has good chemistry with Zoe Saldana and Karl Urban. In the footage that was shown, he and Quinto's Spock are mostly at odds with each other, with sparks flying between them. Pine carries himself well during the action and fight scenes, and he's good in portraying a rough- around-the-edges Kirk who hasn't quite mastered his notorious magic with the ladies. He is also good during the more comedic moments, which include his negative reactions to McCoy's hypo injections. His interactions with Greenwood's Captain Pike are good, and there's one particular moment between Pine's Young Kirk and Nimoy's Old Spock that is really quite touching.

- The exterior of the Enterprise looks bulky and clunky, especially the warp nacelles. I can only hope that at the end of the movie, they show the ship being repaired and fitted with new, sleek nacelles. (Wouldn't mind seeing them replace the secondary hull too, but that might be too much to ask for.)

- The interiors of the Enterprise are BIG. They look far bigger and more spacious than ever before--which actually might be closer to what Roddenberry envisioned. He didn't like Nicholas Meyer's "submarine" aesthetic for the Enterprise, with crewmembers sharing quarters and sleeping in bunkbeds.

- Continuity is maintained, in the sense that Kirk is from Iowa and his middle name is Tiberius. Spock is from Vulcan and his mother is human and his father is Vulcan. Chekov's full name is Pavel Andreivich Chekov. Scotty's first name is Montgomery. Captain Pike commanded the Enterprise before James Kirk.

All diehards and anal-retentives better go into this expecting a whole new ballgame, or it's going to be a very unpleasant experience. It's very clear that Abrams and Co. play fast and loose with Star Trek history, to say the least.

Just from the four scenes we saw, I could tell that elements and details from "Balance of Terror" and even "The Menagerie" have been rendered null and void. Starfleet is apparently well aware that the Vulcans and the Romulans are related. The quasi-canonical Captain Robert April? Forget about him. Pike is the first commander of the Enterprise, because he takes command upon the ship's completion.

Depending on how the film ends (I don't know whether Pike remains in command of the Enterprise at the conclusion or we actually see Kirk take over as captain), Pike's original visit to Talos IV may no longer be part of the history, or the fact that Spock served on the Enterprise under Pike for 11-plus years before the switchover to Kirk.

Overall, I suspect that people who like Star Trek but who don't have encyclopedic knowledge of it (my wife, for example) won't be bothered by any of this. If it's a well-acted movie with great special effects and a good story, chances are that they'll like it. Hell, I might even find myself liking it, as long as I force myself to see it as a new, completely separate entity--a full reboot, as much as John Byrne's MAN OF STEEL was for Superman--instead of a proper canonical prequel. And of course, people sampling Star Trek for the first time with this movie won't know that anything has been changed or contradicted.

I have a feeling that anyone trying to connect this neatly with previously established TOS is gonna go nuts.

So... is it going to be a hit or a bomb? Can't say yet. From what I saw, it looks like it will be a well-made, well-acted, fun adventure.

But one thing's for sure: it will only be a hit if it attracts more than just the Star Trek fans. Abrams is clearly aiming to bring in a new audience, and he's right to do so. Will he alienate the core audience in the process? Will it matter if he does? Only time will tell.

Glenn asks the right question, Steve! Who cares about us, us who made the franchise worth a billion dollars? If marketing says we need a fresh boatload of 18-25 years-olds to line the coffers, they're all in for a shock! The boomers are done, the population increase is all "undocumenteds" and us Trekkies are aging nicely into the majority.

So! I may have to come into town for this one! Meet up with my old chums, James and Paul and see it together (we saw 2001 together).

Too bad it's so far off-- that and the Potter flick,

Hmmm... sure that's not their reaction to the trailer for the new film? It sure looks like MINE...

I've been pretty fond of Star Trek over the years (though never really a Trekker/Trekkie-level fan), especially the original series, Next Generation (well, from season 2 onward, anyway) and Deep Space Nine, as well as roughly half the feature films.

I have to admit, the clip I saw of this movie at Pajiba.com had me repeating the litany of sucky, sucky, sucky in my head...but I think I'm going to give benefit of the doubt. Reboots and remakes can be good when done well. The last couple Batman flicks proved that, and The Thing and The Fly in my lifetime were far superior to the '50s versions.

This is an ailing franchise that's been milked far past what it was worth (Voyager pushed the envelope and started the tearing, and Enterprise ripped it to shreds). Only tearing it down to the foundations and rebuilding can have a hope of reviving it.

First of all Steve- CONGRATULATIONS on getting married!!!!!! jeez, I had no idea, and wasn't even invited:-(
As far as the movie- I am a TOTAL Star Trek geek- so thanks for the info about going in w/out expectations of our beloved original.
I'm rally glad that theey're including the Menagerie- it's one of my all time favorites.

I am def looking forward to seeeing it .

"Congratulations on getting married???" Um, thanks and all that, but when did I get married?