From my pal Jill over at the Comic Book Legal Defense Fund:

New York Times best-selling author Neil Gaiman and the CBLDF unite for an evening of THE SANDMAN storytelling! 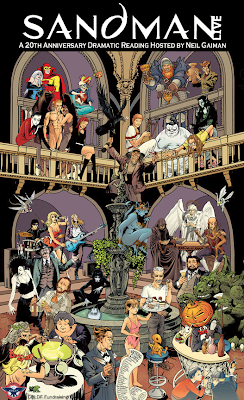 Veteran voice actor Tom Wayland and others, will read from some of the most politically charged excerpts of THE SANDMAN written by *New York Times*best-selling author Neil Gaiman, in honor of the 20th Anniversary of THE SANDMAN.

Hosted by the CBLDF and Vertigo, the dramatic reading will be will be held it the Helen Mills Theater in New York City on Saturday, November 8 at 7:30 pm. Tickets are available for a $50 donation to the CBLDF. Only 100 tickets are available to this special reading event.

THE SANDMAN is a series that is often hailed as one of the finest achievements in graphic storytelling and which Norman Mailer famously praised as, "a comic strip for intellectuals." This very special evening will bring two of the series most beloved stories to life with a multimedia presentation that marries comics and live theater.

About the stories being performed:

Three Septembers & A January, originally published in THE SANDMAN #31 / Trade #6

The story of Joshua Abraham Norton the first, last and only Emperor of the United States of America that incorporates an explanation for his strange career centering on a challenge between Morpheus and Despair.

A revival of a 1970s DC character named Prez, it's the story of the US's first teenage president that considers how we view our leaders—while they're in office . . . and once they're gone.

The Comic Book Legal Defense Fund was founded in 1986 as a 501 (c) 3 non-profit organization dedicated to the preservation of First Amendment rights for members of the comics community. They have defended dozens of Free Expression cases in courts across the United States, and led important education initiatives promoting comics literacy and free expression. Neil Gaiman serves on the Board of Directors of the CBLDF, and has raised over $150,000 for their work through his events and charitable appearances. For additional information, donations, and other inquiries call 800-99-CBLDF or visit http://www.cbldf.org or http://www.myspace.com/cbldf
Posted by Bunche (pop culture ronin) at Thursday, November 06, 2008