ONCE AN ARSENAL, NOW A CHOLESTEROL HAVEN

Many of us who grew up with the pre-Giuliani New York City have for years loudly lamented the now lost anti-grandeur of Times Square and the awesome take-your-life-into-your-own-hands fun to be had on 42nd Street, aka "the Deuce," its singular squalid excellence now supplanted by a gaudy tourist trap packed to the gills with overpriced and mediocre restaurants, and lavish, soulless Broadway adaptations of Walt Disney movies. It's hard to communicate the loss of the sleazy no-man's-land-for-the-everyman whose scabrous wonder was a must-see for kids of the Tri-State Area; the plethora of lurid grindhouses and their gory/near-pornographic come-on advertisements, strung-out junkies, bizarro drag queens and such were a fascinating "fuck you" to the relatively G-rated world beyond, and it was the birthright of kids in the Tri-State Area to go there and have their innocence irrevocably shattered.

I was on 42nd Street recently and again my heart sank to see this once proud and utterly shameless Whore of Babylon neutered and tamed into the plastic strip mall that it is today. As I elbowed my way through the touristy throng on my way to the subway station, I was appalled to behold this especially offensive example of corporate ubiquity: 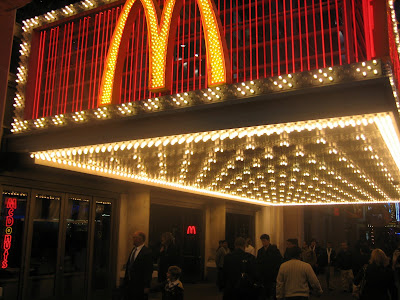 This glitzy and ultra-posh Mickie-Dee's looms large on the site of what was once a spacious Chinese gift store which had a rear area that could best be described as a kung fu fan's dream come true, specifically a huge selection of martial arts weapons of all manner of description and function, both common and esoteric. Looking for a pair of chrome shobo? 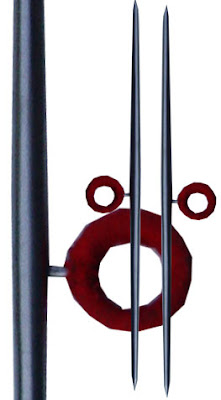 A seven-foot staff surmounted with a very pointy and fearsome "wolf teeth" club? 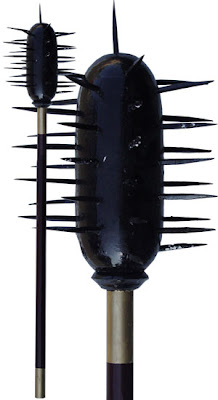 A life-sized hand crafted from solid bronze with curled, taloned fingers attached to the end of a chain for intimidating use as a flesh-shredding flail? Flagrantly illegal butterfly knives and brass knuckles? All of that stuff and much, much more was readily available for reasonable prices, and it was yours for the asking provided you could cough up the required green.