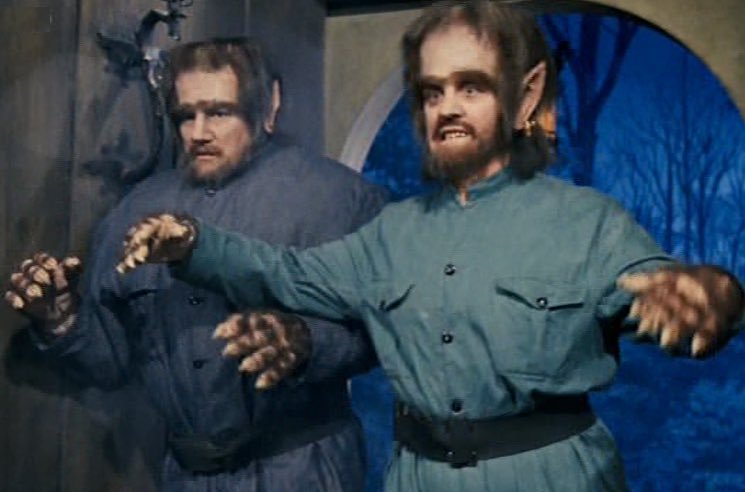 Monsters on the loose!

Edwardian England: As young lovers Doris (Angela Douglas) and Albert (Jim Dale) attempt to get romantic in fog-shrouded Holcombe Woods, Doris ends up as the sixth victim to be abducted by a mysterious, hulking monster (Tom Clegg). Albert reports the disappearance to Detective Constable Slobotham (Peter Butterworth), who enlists Detective Sergeant Sidney Bung (Harry H. Corbett) to investigate. The clues lead the trio down a trail of escalating played-straight lunacy of the type that one could see coming from the mid of Charles Addams if he'd been born and raised in England. They encounter a creepy house run by the stunning Valeria (Fenella Fielding, in full-on Morticia Addams mode, only dressed in red as opposed to black), Lurch-like butler Sockett (Bernard Bresslaw), and Valeria's brother, dead and electrically-charged mad scientist Dr. Orlando Watt (played to perfection by the one and only Kenneth Williams), and all of the madness and mayhem that one would expect from a comedy poking fun at then-in-vogue horror tropes to send up. Lurking monsters, cleavage-baring dresses, laboratories filled with sparking electrical equipment, kidnapped girls subjected to medical experiments, colorful locals played by scenery-chewing studio regulars, an evil seductress, Jekyll/Hyde-style transformations, you name it. And when all is revealed, the master plan of the sinister siblings turns out to involve turning the abducted girls into wax figures that are crated and sold. (Considerably less lofty than reanimation of the dead or summoning demonic entities from Hell, like one would see in a garden variety Hammer film, but it's a living.)

The twelfth in the long-running CARRY ON series, CARRY ON SCREAMING is less a parody of specific Hammer horror films and more a lampoon of their singular flavor and aesthetic in he days before the studio was allowed more freedom when it came to explicit blood, gore, and female nudity, The CARRY ON franchise is a prime example of pre-Python British humor, loaded as it was with endless "sauce," meaning pretty and stacked actresses acting silly in as little clothing as the censors would allow, double-entendres, and all manner of sex-related farce as seen through what outsiders would consider to be a stodgy and somewhat stereotypical British sensibility. That said, I kind of wish this film were made a bit later during Hammer's heyday, so it could have had even more or an excuse to cram in as much over-the-top humorous nudity and gore as possible, but I'm happy with what we ended up getting. It's definitely one of the best CARRY ON films, right up there with their Cleopatra spoof, CARRY ON CLEO (1964). 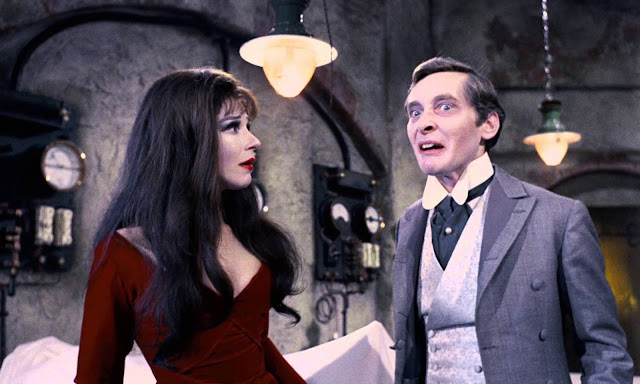 Valeria (Fenella Fielding) and her brother, Dr. Orlando Watt (Kenneth Williams).  I would have happily watched an entire series based on the antics of these two.

CARRY ON mainstay Kenneth Williams has long been one of my favorite U.K. comedic performers, and his in fine camp form here as Dr. Watt. His signature queeniness is a delight, as always, and the glee with which he knowingly delivers the terrible puns that pass as his lines is downright infectious. And do not get me started on the awesomeness that was Fenella Feilding's turn as Valeria. Though nebulously-defined, her character is definitely some kind of supernatural whatsit along the line of Morticia Addams, right down to the ability to make her body spontaneously exude smoke. 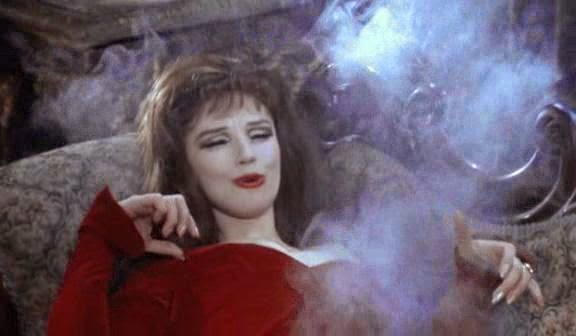 She's sexy as hell and possessed of a sultry voice, plus to say nothing of how she fills out her blood-red dress, so why is Valeria not on the short list of foxy monster chicks like the Bride, Vampira, Morticia, Lily, and Elvira?

CARRY ON SCREAMING has nothing on its mind but to be a bit of naughty, silly fun that takes the piss out of Hammer horror, at which it succeeds quite nicely, though from today's P.O.V. it's rather tame. Still, it hits all the right notes and nails the Hammer flavor, so I recommend it to fellow Hammer-junkies. Plus, it features good old Jon Pertwee as a police scientist, just a few years before he became a British superstar and cultural institution as the third incarnation of the Doctor on DOCTOR WHO. 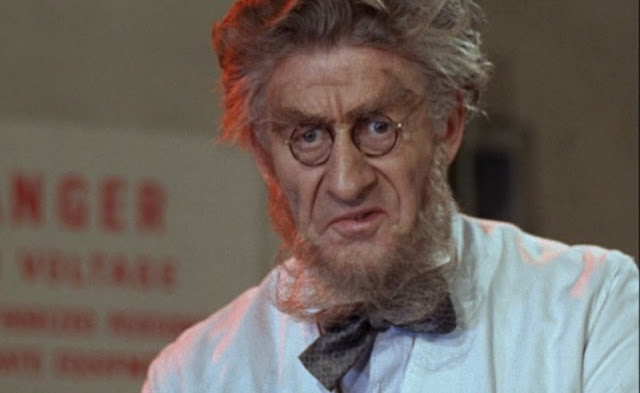 A comedic role for Jon Pertwee, a few years shy of ruling the airwaves on DOCTOR WHO. 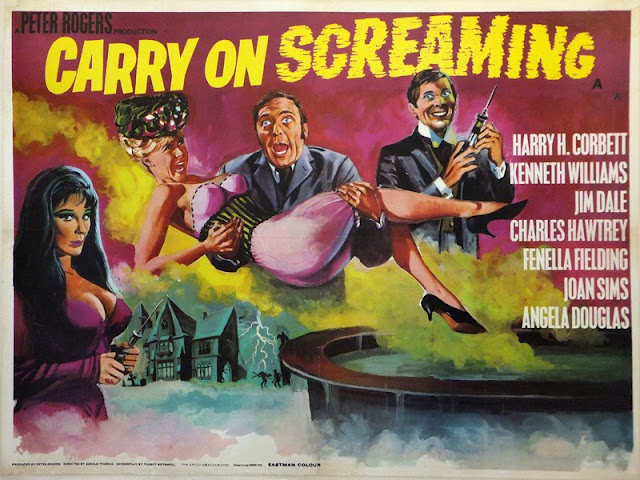