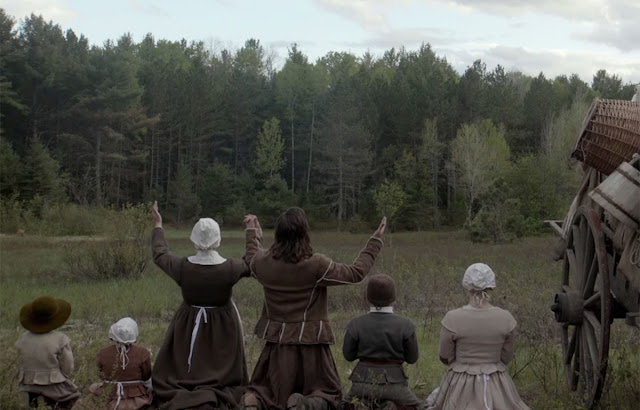 
New England in the 1630's: After getting banished from a Puritan plantation community due to his perceived "pridefulness," uber-devout William (Ralph Ineson) attempts to start over set up a home and farm in a remote forest. Accompanied by his wife Katherine (Kate Dickie), eldest daughter Thomasin (Anya Taylor-Joy), eldest son Caleb (Harvey Scrimshaw), young twins Mercy and Jonas (Ellie Granger and Lucas Dawson), and newborn Samuel, things would seem to be looking up for the family, until baby Samuel is abducted into the woods by some unknown entity while out in Thomasin's care. Unfortunately for them, the family has moved in near the secluded lair of a witch straight out of ye olde schoole woodcuts, and she wastes no time in getting down to diabolical business, staring with the killing of the baby for use as a key ingredient in a bloody flying ointment that she anoints her naked body with. Devastated, the family attempts to soldier on and keep faith while attempting to make a go of their farm, but Katherine goes off the deep end into despair over the loss of her baby while casting blame on Thomasin, whose burgeoning young womanhood causes tension for her parents and especially for her Caleb, who is himself feeling the stirrings of adolescence and his budding sister is the only game in town. While her parents plan to send Thomasin off to work as a servant girl for any family that will take her — thus getting the perceived cause of the baby's abduction to be out of sight and out of mind, as well as staving off any possible incestuous shenanigans — the crops fail and the livestock display signs that they are bewitched, so it's only a matter of time until the powder keg of puritanism is ignited by tension over Thomasin's blooming sexuality and the influence of the dark arts. 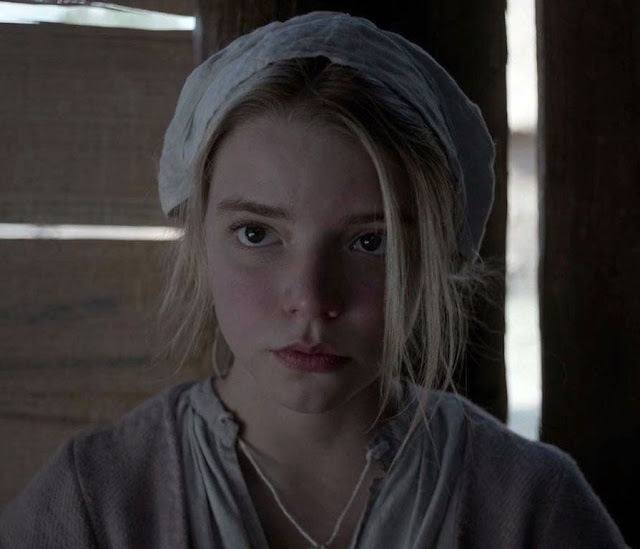 
What could have been an ambiguous study of a Puritan family slowly unraveling under the weight of its own fanatical rigidity and isolation is revealed as a straight-up horror tale right off the bat, as we see the titular sorceress getting up to her child-murdering potion prep about ten minutes into the film. There's no question whatsoever as to whether the family is going mad from their attitudes and circumstances, but certainty in no way detracts from what can best be described as the propagandist material found in old anti-witchcraft tracts and pamphlets brought to life. The grounded nature of the performances sell the story beautifully, with Anya Taylor-Joy as Thomasin being letter-perfect as a girl on the cusp of womanhood in a society where virtually every joyful aspect of life is deemed sinful. And in this era where horror films rely on cheap jump scares to thrill undemanding audiences at the local multiplex, it's refreshing to get a horror film for grownups that respects the audience's intelligence and is willing to deliver its chills via a slow burn.

Dripping with dreary period atmosphere and a realistic edge that greatly benefits the proceedings, THE WITCH is creepy as hell from start to finish and the viewer realizes early on that what we get here is absolutely a no-win situation. Witches are real, their dark powers are real, and the satanic master that they willingly serve and cavort with even turns up in person, first in the now-iconic form of Black Philip, who will make you think twice when next you visit the goats at the petting zoo, and later as a seductive gentleman.

The one caveat I'd like to proffer to those approaching this film as newcomers is to take it for what it is, specifically what would have resulted had caterers to witch-hysteria in ye olden times would have made by way of a propaganda movie. Yes, it dredges up all of the patriarchal, puritanical, anti-woman tropes one would expect from a story set in its specific time and place, but the film itself is clearly not bearing any sort of anti-feminist/anti-Wiccan agenda. It's an old school witchcraft story that plays into the long-established tropes of the lore as seen from the point of view of those outside of the Craft and who both feared and did not understand what it was actually about, and I'm certain the filmmakers went into creating it simply as a horror story from that perspective. All that THE WITCH has on its mind is entertaining its audience, and it succeeds mightily at its task, especially when taking into account that it is writer-director Robert Eggers' first feature film.

Full disclosure: I've been fascinated by the historical era depicted in the film since I was eight years old, at which point I acquired a copy of Peter Haining's superb WITCHCRAFT AND BLACK MAGIC (1972), part of the Knowledge Through Color series, via (believe it or not) the Scholastic Books program. 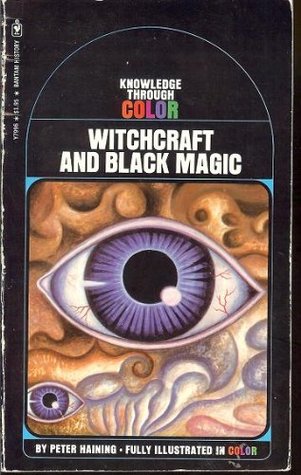 It was a serious book on the history of witchcraft, mostly as seen in Europe and early America, and it pulled zero punches in describing all of the nastiness  that anti-witch crusaders wanted the general public to believe, and it even included reproductions of ultra-graphic woodcuts and pamphlets outlining assorted tortures administered by "professional" witch-hunters and agents of the Spanish Inquisition, so you can imagine what an education it was for this eight-year-old. From that formative influence I developed a taste for horror stories about witchcraft, especially those that hewed close to what was historically believed to have been practiced by real witches, and being awakened to the fact that the anti-witch hysteria and persecution was perpetrated by misogynistic criminals who feared wise women did nothing to diminish my taste for the sub-genre. So, if you, like me, get what witchcraft is really about and are down with it, but enjoy old school scary witch stories nonetheless, I cannot recommend THE WITCH heartily enough. 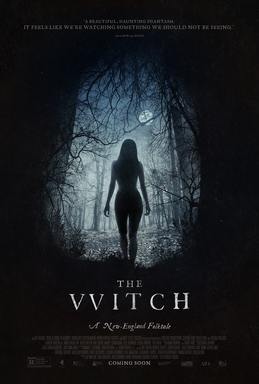 Poster from the general theatrical release. 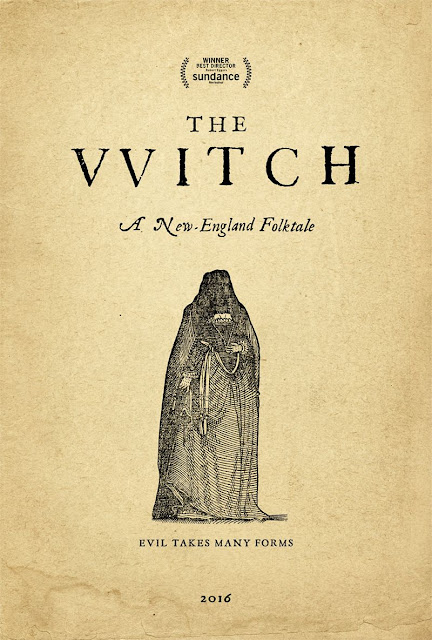 Thanks, Bunche. This one has been among my favorite horror films ever since the first time I saw it (I own it now), and it's one of the first examples I bring up (along with AMERICAN MARY, MARTYRS, À L'INTERIEUR, IT FOLLOWS, and FRANKENSTEIN'S ARMY as examples of the current renaissance in horror-movie creativity.