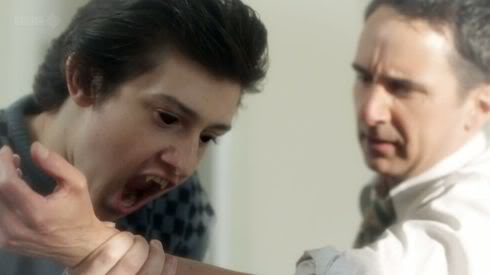 An unusual way of putting food on the table for one's child.

Meet Adam Jacobs (Craig Roberts), a 46-year-old British vampire with the physical/social/emotional development of an obnoxious, hormonal teenager. His poorly-controlled feeding habits force him and his parents to periodically move residence to places where they are not known, only for the cycle to once again repeat itself, but this time Adam opts to feed on an old man in the Bristol hospital where George Sands (Russell Tovey) works as an orderly. That's a fortunate development for him because George is a reluctant werewolf with a kind heart who lives as a seemingly mundane guy in normal human society. George brings the (relatively) young suckface home with him, intent on giving the "kid" someplace to live while his father lays in a hospital bed, slowly dying after decades of allowing his son to feed on his blood. (An example of which we see in the episode's opening flashback, set in the 1980's.)  Once the old man expires (in a truly tragic scene that makes clear that he loved his son very much, vampire or not), Adam officially moves in with George and George's housemates, Mitchell (Aidan Turner), who is himself a vampire of over a century in age, and Annie (Lenora Crichlow), the ghost of a young woman who was murdered in the house. The three supernaturals strive to live as normally as possible but it's not an easy task — as Annie is adjusting to just having been rescued from purgatory, and Mitchell is attempting to stay "clean" after savagely slaughtering twenty people on a train — so they seek a stable family of vampires with whom to place Adam. 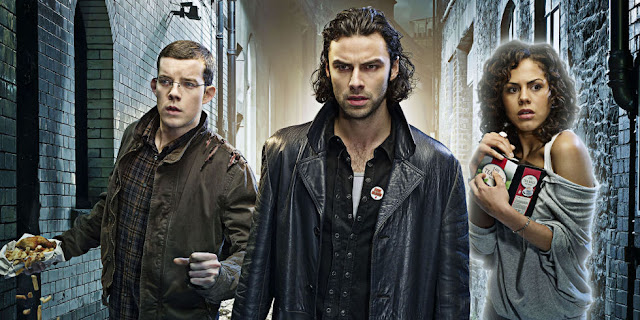 BEING HUMAN'S protagonists: housemates George (a werewolf), Mitchell (a vampire), and Annie (a ghost).

The perfect foster home seems to be found when Adam is introduced to the kindly and well-off Richard (Mark Lewis Jones) and Emma (Melanie Walters), who live in a posh country estate and get around the grotty business of killing humans by maintaining a dungeon in which they have kept a succession of all-too-willing humans as a straight-from-the-tap blood source. That arrangement strikes George as weird, especially after meeting and chatting with Number 7 (Morgan Jones), the latest "big, bouncy food supply" who happily resides chained up in the dungeon and perpetually clad in a full-body rubber S&M outfit. His interactions with Richard reveal that he is treated like a beloved (if rather stupid) puppy, and that his drained-out predecessors have been given the "dignity" of a burial in the family garden, as if they were simply expired house pets. Richard and Emma also display a solid streak of upper-class snobbery and racism, considering humans and the other members of the non-human community to be "trash from housing estates, the dole scum, the layabouts, mongrels...and werewolves," but George and his girlfriend, Nina (Sinead Keenan), figure Adam would be better off in a vampire environment that eschews straight-up murder of innocent prey. However, once back home, George and Nina realize they've left an immature and impressionable killing machine to be raised and influenced by foster parents whose attitudes are elitist and racist, so they head back to get the lad the hell out of there. But what George and Nina did not figure on was the fact that Adam's new foster parents are a pair of hardcore, kinky-as-hell hedonistic S&M swingers who seek to initiate the already hormonal Adam into their lifestyle during a full-blown orgy, complete with guests openly engaging in sex acts, sporting leather fetish wear, and indulging in clearly expert flagellation. But the parents' true and most horrifying party piece is leading Adam into an upstairs room where he will be "made a man" in the presence of — and with the accompanying kinky sexual participation — of Richard and Emma, plus assorted guests, as a delighted Number 7 is laid down upon a pool table covered with plastic sheets, so Adam can literally drink him dry. A nervous Adam is encouraged to feast, as he will' need all his strength" for when his attention is turned to Emma — who, remember, is now his mother figure — and when George and Nina arrive just as the main event is about to go down, Adam must face a choice between going with the good guys and enduring an eternal life of considerable hardship, or giving himself completely to evil and indulging every forbidden whim and fantasy as his heart desires. 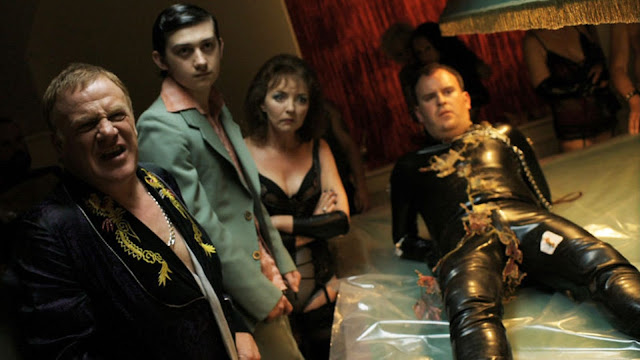 BEING HUMAN was a five-season comedy-drama series that ran on the BBC from 2008 through 2013, and while I only saw the first three seasons, I loved what I saw. It took the kind of horror-as-serialized TV thing pioneered by DARK SHADOWS (1966-1971, 1991) and later codified with the likes of BUFFY THE VAMPIRE SLAYER and TRUE BLOOD and gave it a distinctly British reworking that rendered its fantastical elements utterly believable. Though rooted in a recognizable reality, the series perfectly blended the real and supernatural worlds, and the main focus of the show was on how the un-human housemates made their way through the world in as normal a way as fate would permit. Nothing was ever easy for any of them and the audience gets quite invested in their individual and combined struggles and arcs, such as Annie slowly recovering suppressed memories of how she really died and the circumstances leading up to her death, or Mitchel losing control over his vampiric nature and becoming a wanted man by both the human authorities and the vampire community's elders for his role in the "Box Tunnel 20 Massacre." Very good stuff and I intend to someday watch the final two seasons, but the main plotlines sometimes take a back seat to standout episodes like "Adam's Family," which do something new and fun with the tropes one expects from a genre as well-trod as horror.

The correlation between the vampire and the sexual has been explored innumerable times since the dawn of the genre, but "Adam's Family's" depiction of Richard and Emma as jaded, posh, upper-class hedonistic assholes was a stroke of genius, and their portrayal by Mark Lewis Jones and Melanie Walters is nothing short of darkly hilarious as they perfectly convey the oblivious obnoxiousness of the super-entitled. It's made quite clear that there is no perversion that they would not indulge in, and that makes them of far more interest than your run-of-the-mill undead suckfaces, and I was kind of sad that they didn't get their own six-episode side story that allowed us even more of an intimate look into their home (un)life. 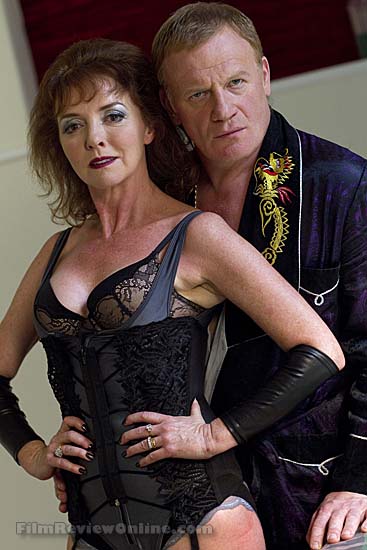 Emma and Richard: a refreshing change of pace for the depiction of the modern-day vampire.

In short, if you have not already checked out BEING HUMAN, it is well worth your time, or at least the first three seasons are. You will not be disappointed.