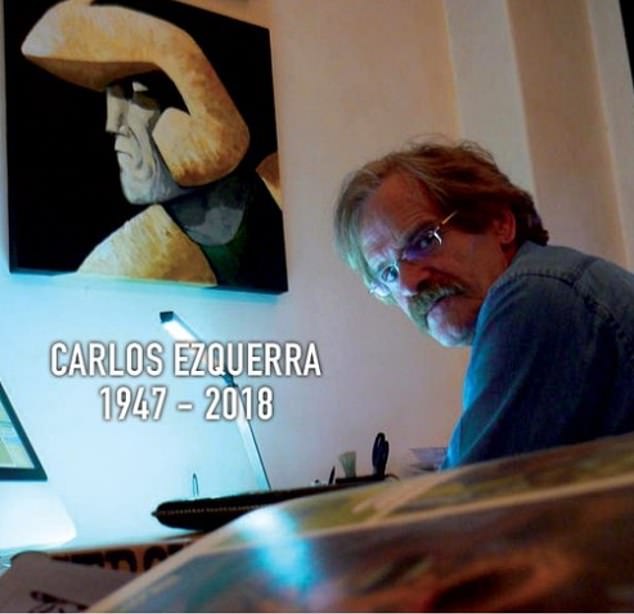 It is with a heavy heart that I pay my respects to the great Carlos Ezquerra, the Spanish cartoonist whose singular style and vision helped build the foundation of Britain's weekly 2000 A.D. sci-fi comics anthology. He's been one of my favorite cartoonists since I discovered his work during a trip to England in the summer of 1981, and since then my admiration for the man's work only grew.

Though virtually unknown to most U.S. comics enthusiasts, at least by name, Ezquerra's co-creations are internationally famous, specifically stern future-cop Judge Dredd and, to a lesser degree, the mutant bounty hunter Johnny Alpha in STRONTIUM DOG. Ezquerra's gritty style appealed to me due to its flavor being similar to the black & white grunginess and lived-in feel of the underground comics that I enjoyed, only his talents were applied to tales of men of action and violence, rather than depicting fantasies of era-specific wanton drug use and sexual excesses with large-breasted hippie chicks. In many ways Ezquerra's aesthetic fit right in with England's burgeoning punk rock movement of the mid-1970's, and his distinctive looks for Judge Dredd and Johnny Alpha both visually communicated something very "street" about the characters. Dredd's earliest design resembled nothing so much as some sort of fetishistic sado-masochistic leather boy, while Johnny Alpha's gear had a sort of slapdash/thrown-together feel that looked as the D.I.Y. kit favored by the U.K.'s punk rocker youth. 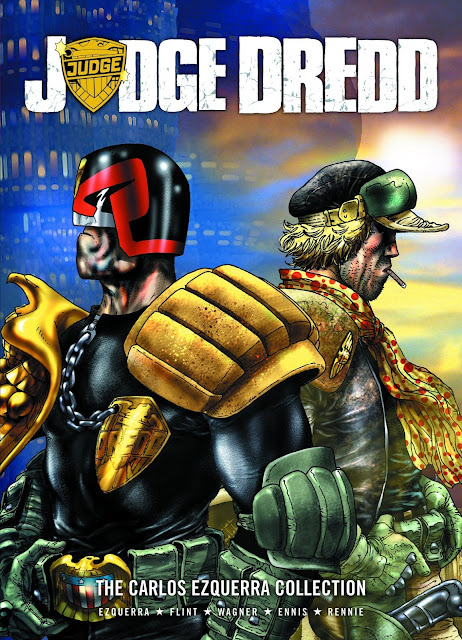 But while Judge Dredd definitely struck a chord with readers as of his debut in 2000 A.D.'s second issue (March 5, 1977), it was STRONTIUM DOG that resonated with me, as it was a futuristic Sergio Leone-style western set in deep space, while also serving as a tale of anti-mutant prejudice that completely lacked the varnish of Marvel's X-Men. STRONTIUM DOG's mutants were not the "beautiful people" that made up the Marvel ranks of genetic weirdoes. No, the mutant's in Johnny Alpha's future Britain were often hideously deformed and persecuted in ways that were a direct commentary on the Nazi atrocities committed against Jews during WWII, with Johnny Alpha himself being the son of the series' Hitler analog. Though blessed with relatively normal looks, thanks to his pregnant mother only being exposed to alpha rays for a limited time toward the end of her pregnancy with him, Johnny's stark white eyes marked him as a mutant from birth, so his father hid him from "norm" society and forced him to constantly wear goggles to hide his deformity, claiming they were needed because his eyes were hyper-sensitive to light. Eventually discovering that his radiation-warped eyes allowed him a sort of X-ray vision and the ability to literally see into the minds of others, young Johnny saw his fascist father's utter hatred for him, so he escaped from his home/prison and fell in with the Mutant Army, a group of hard resistance fighters from all over the United Kingdom, each bearing the visual reminders of their difference from the "norms." After years as a fighter and eventual commander of the guerrilla forces, at the end of the war for mutants' rights, Johnny Alpha put his deadly skills to good use in the only job open to mutant "scum" like himself, namely inter-stellar bounty hunting, and the rest is comics history. 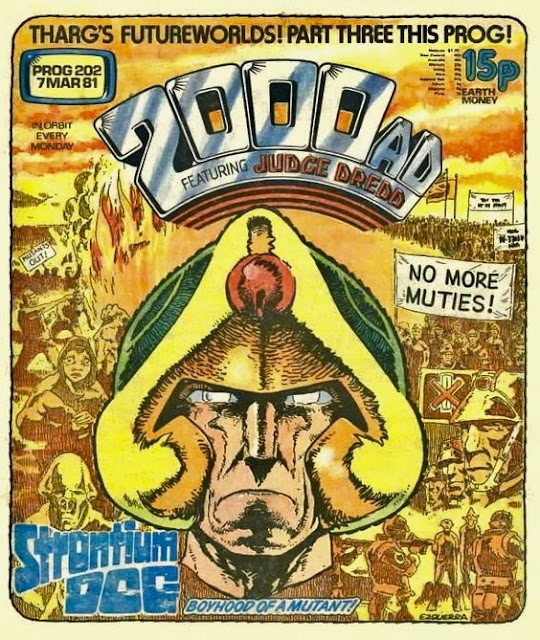 The first chapter of "Portrait of a Mutant," the epic origin story that made me a STRONTIUM DOG fan for life.

Thanks to that origin story, "Portrait of a Mutant," I became a Strontium Dog booster and a 2000 A.D. fan overnight, and I'm still a devoted reader some 37 years on, and it's all due to how Carlos' artwork communicated with me. 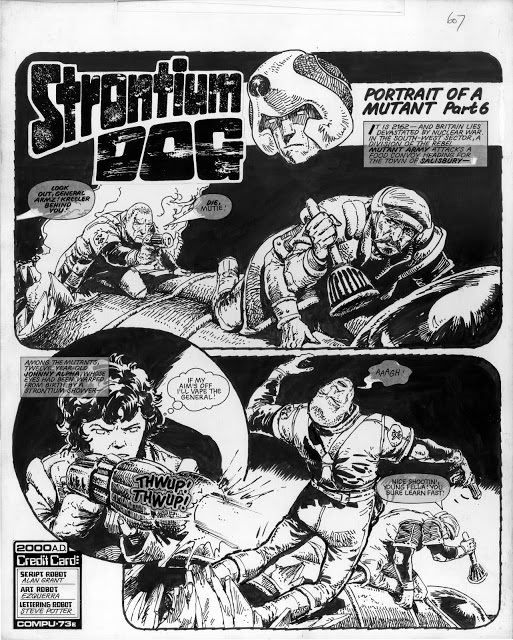 One of the treasures of my original comics art collection, an actual page from "Portrait of a Mutant." (You don't want to know how much it set me back, but it was worth every penny.) 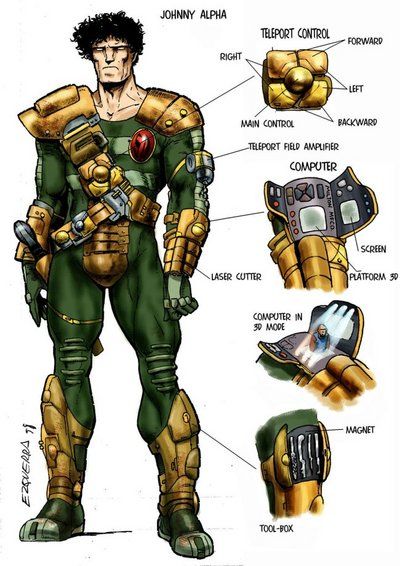 Johnny Alpha costume guidelienes by Carlos Ezquerra, from a proposed STRONTIUM DOG television series that never got off the ground. 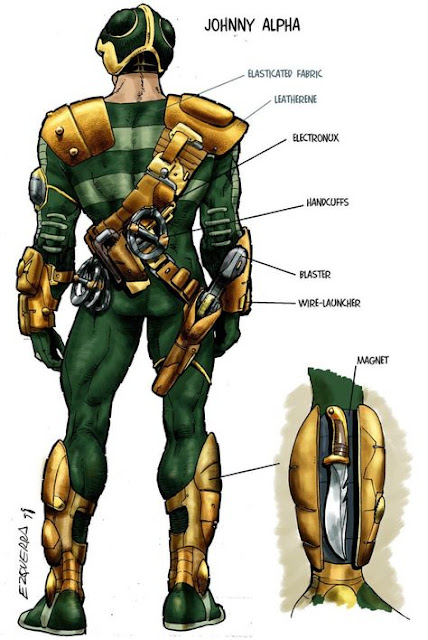 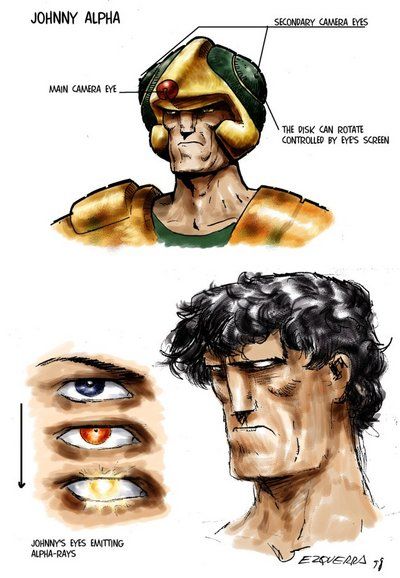 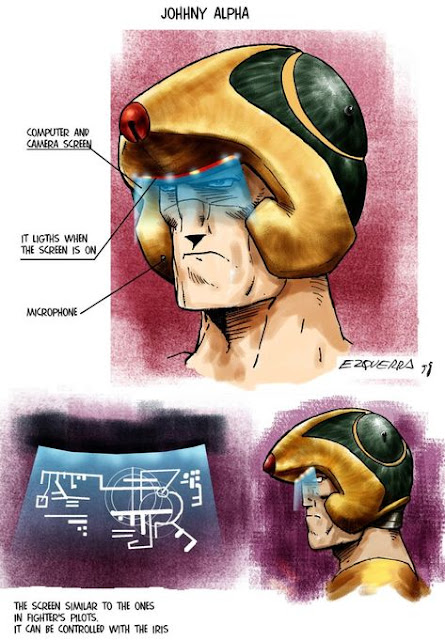 And now Carlos has joined the ranks of the honored cartooning dead, tragically just weeks after surviving his second surgery for lung cancer. It's absolutely heartbreaking and I am at a loss for words, so with that I say requiescat en pace, mi amigo. You may be gone but your creations live on. 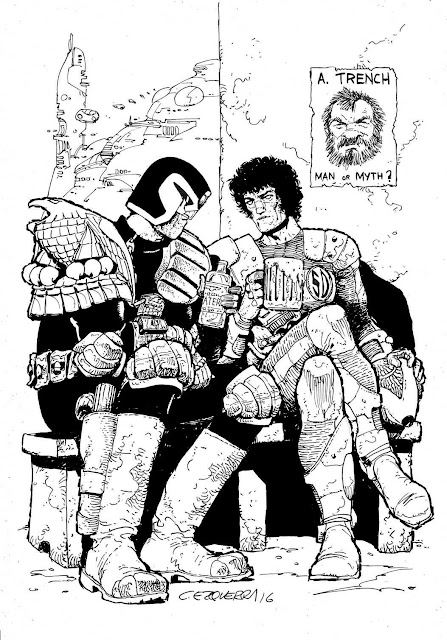