40 YEARS AGO TODAY: MY "BEATLES ON SULLIVAN" MOMENT 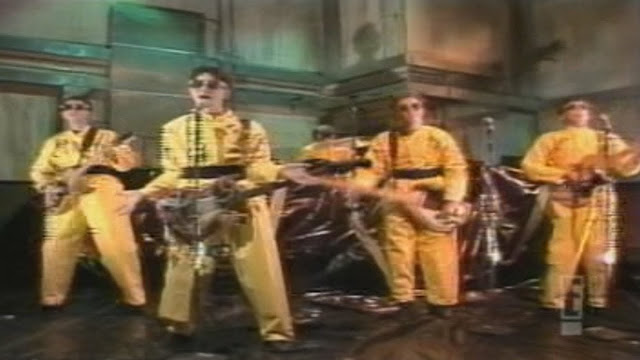 The night I discovered my personal Beatles.

On this night forty years ago, I was a miserable thirteen-year-old caught between being stuck in a hostile hometown filled mostly with hostile, affluent morons, and the nightmare of torturous adolescence. It was also toward the ass-end of the years-long plague that was disco, but that pandemic of largely brainless booty-shaking tunes was not yet ready to give up the ghost, so pop music radio was a fucking nightmare. (Little did I know that it would only get worse, far worse, with the dawn of the 1980's, over-saturation thanks to the newly-minted MTV, and the total domination of the airwaves by corporate "product" music.)

Anyone who knows me in the world outside of the internet will tell you that one of the first things most people come to understand about me is that I am a huge music buff whose interests cover just about every known genre of works Euterpean, and then some. I'd grown up with a steady diet of musicals, big band and other pre-rock forms, early rock and country, pre and post-Beatles '60's fare, and classic '70's pop, but by the late 1970's the dominance of disco pretty much amounted to aural fascism, while the rest of the pop music heard on the radio began to degenerate into overplayed, trite little ditties that wound up sounding like TV commercial jingles. (And in many cases would later become used as such.) Those were the days just before I discovered the joys of punk, "new wave," and heavy metal, so my young mind was starving for something, anything different that would set my sensibilities ablaze.

On the night of Saturday, October 14, 1978, I settled in to watch SATURDAY NIGHT LIVE, just as I had every Saturday night for just over a year upon being clued in on the show by some peers during wilderness camp in 1977, and while I was used to the program providing a live showcase for unknown musical acts, I was in no way prepared for that evening's band. When host Fred Willard announced some group called "Devo," I expected another disposable place-holder until the next comedy sketch came on. What I got instead was unquestionably one of the most seismic shifts in my musical and pop culture sensibilities, and definitely a life-changing moment.

On the stage stood four hasmat-suited white guys and a seated drummer, all of whom looked like an assortment of clones or androids straight out of a 1950's sci-fi movie, and when they began to perform, their movements were bizarrely herky-jerky as they made their way through... No. Wait a minute... That can't possibly be... The Rolling Stones' "(I Can't Get No) Satisfaction?!!?" But sure enough, it was the old Stones chestnut, only as warped and filtered through an even more frustrated and fraught way of communicating its lyrical intent than the original could ever have been allowed to get away with some thirteen years earlier. It jabbed at my nerve endings and truly connected me with what it was all about for the first time. I'd known the song well since I was old enough to remember anything beyond the confines of my crib, and I had even seen my dad sing along with a local band's live performance of it while he was drunk during a family trip to Martinique when I was nine, but it took the blank gaze and escalating tension in the voice of frontman Mark Mothersbaugh to drive home the "no-matter-what-I-do-I-lose" futility and denied fulfillment expressed by the song's words. To the adolescent me, it was a moment of someone  saying, "I get you, man, and you are NOT alone," and I swear to god it moved me to the core. That, and the sheer bizarre incongruity of seeing this particular band on a stage where I had seen Jackson Browne, Paul Simon, Ray Charles, Leon Redbone (who I always felt was criminally underrated), Elvis Costello (who two years later emerged as a personal Top 10 favorite), Billy Joel, and even the Rolling Stones perform made my mouth hang open in disbelief, and I actually uttered aloud "WHAT THE FUCK DID I JUST SEE???" when the song came to its  abrupt end.

After that, I knew there would be another number from the guest band toward the end of the show, and I impatiently waited to see what this weird-assed Devo had up their sleeves that could match or even best their singular take on the Stones' classic. What I got was a short introductory film with a musical claxon punctuating footage of a jumpsuited adult figure running into an industrial building while wearing a full-head mask with the visage of a wide-eyed baby. 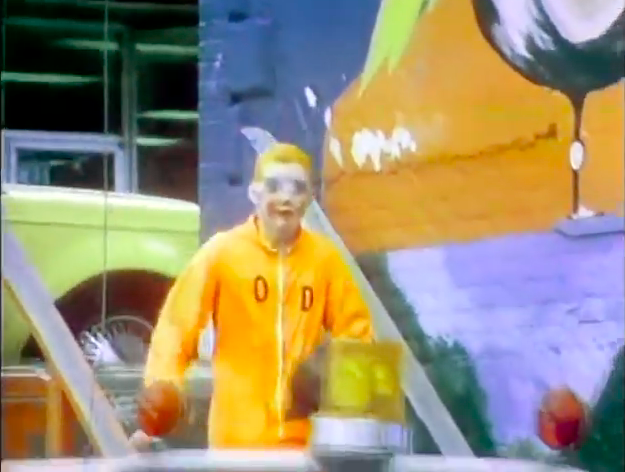 Booji Boy, making haste to spread the word about de-evolution.

I would later find out that this disturbing person was Booji (pronounced "boogie") Boy, the "immature spirit of de-evolution," the more-or-less mascot of Devo and their theories about mankind's sorry de-evolved state, but as I sat there watching him deliver vital papers to a seemingly-military figure, later found out to be one "General Boy," I was utterly hooked by the film's surreal weirdness as it segued into the live band performing "Jocko Homo," an anthem citing how we, humanity, are all Devo, while also citing that "God made made man/But he used a monkey to do it/Apes in the plan/And we're all here to prove it," which was capped off with the brilliant line, "God made man/But a monkey supplied the glue!" Mind. Fucking. BLOWN.

When I and my peers went back to school that Monday and discussed the events of that weekend's SATURDAY NIGHT LIVE installment, everyone was perplexed by what they had seen when Devo took the stage, though few found it to be the "come to Jesus" moment that I did. And since that was about four years before my mom bought a VCR for the house, I resorted to taping audio recordings of SATURDAY NIGHT LIVE each week and editing them down to just the highlights, and the only bits I kept from the Fred Willard show were the two Devo performances. I listened to that tape over and over again until the Christmas of two years later, by which point Devo had released three albums, with their then-current LP, FREEDOM OF CHOICE, yielding Top 40 hit and definitive anthem for both new wave as perceived by the general public and for the dawn of the 1980's as a decade, "Whip It." That Christmas I asked for, and got, the first three Devo albums, and by the end of that week I had committed every word and every note on them to memory and, emboldened by the different, utterly bizarro flavor they introduced me to, the door was fully opened to my never-ending quest to find and devour as much off-the wall music as I could get my hands on. It's now forty years later, and I fondly reflect on that night the way the now-senior citizen kids in 1964 felt when the Beatles won their hearts and minds with their American TV debut.

So, thank you, Devo, from the bottom of my heart. You provided a much-needed window of mental freedom and enlightenment to this very unhappy adolescent misfit, and for that I owe you a debt that I can never properly repay. Since that night and until the day when my time on this unforgiving rock comes to its inevitable end, I shall always remember that I am and that we are all Devo. 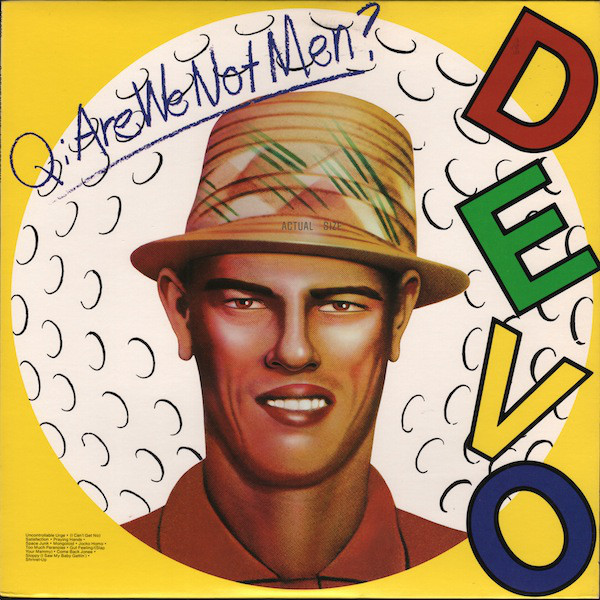 Q: ARE WE NOT MEN? A: WE ARE DEVO! (1978) The first and arguably best album by my favorite band of all time. An era-defining masterpiece in every way, if you do not already own a copy of this record, GET IT IMMEDIATELY. 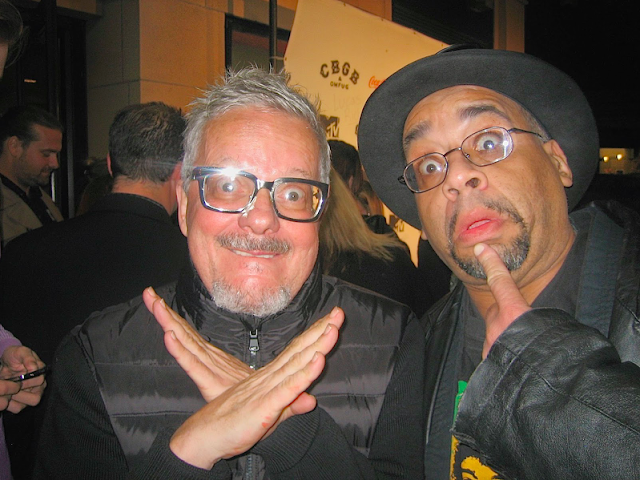 I was watching that episode too, that night, and though it took me years to like Devo's take on "Satisfaction," the minimovie and "Jocko Home" caught my interest immediately. I was not initially a fan of the New Wave (mostly because nearly everyone I knew in school who liked that stuff was a douche), but for Devo, Klaus Nomi and Gary Numan - all of whom I discovered through SNL during that era - I made an exception.

(My depthless adoration for Oingo Boingo came years later, in college, when my friend Karl put on NOTHING TO FEAR and I began dancing around the room to "Grey Matter," asking "Who IS this?" When Karl Replied, "Oingo Boingo," I was like, "THAT'S Oingo Boingo? THAT'S Oingo Boingo?" I'd heard of them two or three years before that point but had never listened to them until that moment because the name annoyed me even more than the people who liked that band in high school.)