Never a dull moment during a zombie apocalypse!

An experimental gas escapes into the air of a small Texas town, rendering heavily-armed paramilitary soldiers and most of the local populace into flesh-scarfing, pustule-festooned undead, and those lucky few who find themselves immune must take up weapons and kick motherfucking ass to stay alive and attempt to stop the gas from spreading and bringing about the end of the world. Our ostensible protagonist is go-go dancer Cherry Darling (Rose McGowan), whose unfortunate encounter with some flesh-munchers leaves her minus one leg, and her mysterious ex-boyfriend, El Wray (Freddy Rodriguez), proves to be quite the badass as he dispatches the infected with extreme prejudice and equips Cherry with a machine gun/grenade launcher prosthetic limb. Also caught up in the mishegoss is a doctor in an unhappy marriage (Marley Shelton), her creepy husband and fellow doctor (Josh Brolin), the owner of a dinky barbecue joint (Earl McGraw), his hard-nosed sheriff brother (Michael Biehn), a pair of hot Latina identical twin babysitters (Elise and Electra Avellan) who are quite handy with ordnance, and an assortment of other broad characters that add flavor to a maelstrom of completely over-the-top exploitation-tinged apocalyptic mayhem. 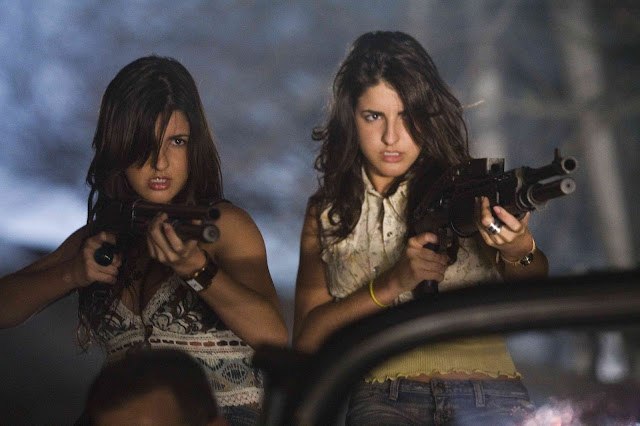 The identical Latina awesomeness of "the Crazy Babysitter Twins" (Elise and Electra Avellan).

Originally the first half of the faux double-feature GRINDHOUSE (which was hands down my favorite moviegoing experience of 2007), director Robert Rodriguez's PLANET TERROR was subsequently extended and issued as its own entity in international releases and on home video, and it's a total hoot. It bears the signature energy of Rodriguez's earlier efforts — EL MARIACHI (1992), DESPERADO (1995), FROM DUSK TILL DAWN (1996), and SPY KIDS (2001), just to name a few — and its approach is the perfect blend of played-straight genre parody/commentary and crowd-pleasing avalanche of graphic violence and disgusting showers of blood and gore. The performances are all knowing and dead-on, and in between the offal-showering set pieces there's a healthy streak of ludicrous humor, and I laughed my ass throughout at the insane, gleeful bedlam of the whole thing. In short, PLANET TERROR works as DAWN OF THE DEAD by way of Mad Magazine, a throwback to the days when zombie flicks ruled the screen (with a strong dose of ESCAPE FROM NEW YORK thrown in for good measure) and logic came in a distant second. 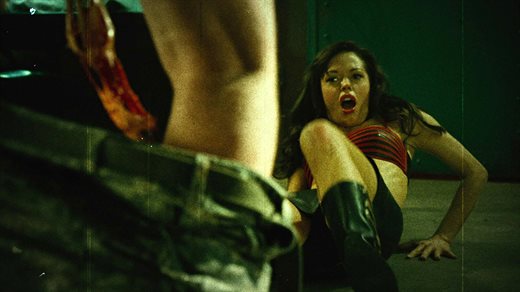 If you love 1970's-style exploitation flicks the way I do, you can't go wrong with this one. Like its GRINDHOUSE companion feature, DEATH PROOF, the film aims to recreate the experience of sitting through a sex-and-violence-drenched double feature in a grungy environment, complete with simulated shit-quality prints and dubious trailers, and succeeds in spades. 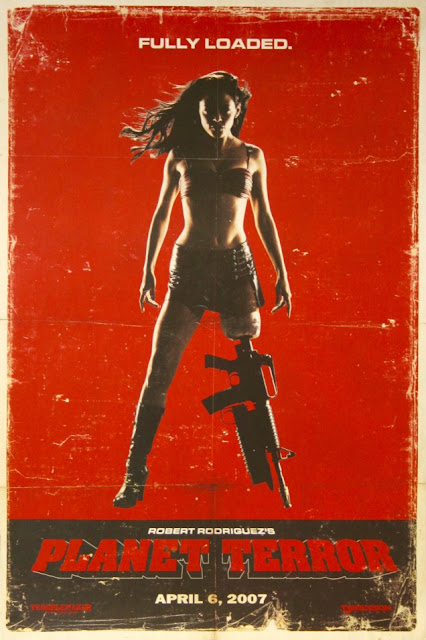