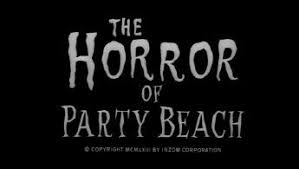 Universally hailed as a member of the bad horror movie pantheon, THE HORROR OF PARTY BEACH is a film that's held a dear place in my heart since I was nine years old, and even at that tender age I knew it was a steaming turd.

The plot, such as it is, is simplicity itself: After toxic chemicals are dumped offshore near a beach in southern Connecticut, human remains in a sunken boat come into contact with the stuff and spontaneously mutate into murderous fish-men. The rampage of the creatures plays out against an uninteresting romance sub-plot involving a wooden bohunk whose sleazy girlfriend is the first to get offed by the the monsters, so he finds solace in the arms of a "nice" girl whose dad is the requisite scientist who's investigating the creatures. And there's even an out-of-date stereotypical superstitious black maid thrown into the mix who is convinced that the monsters are the direct result of voodoo. No, seriously.

The unexpected box office success of BEACH PARTY, the film that single-handedly created the low-budget,  brain-dead fun-in-the-sun musical comedy genre which formed part of the American cinema mosaic of the 1960's, spawned a host of imitators and cash-ins, some of which attempted to fuse its chaste, pre-hippie teen shenanigans with Abbott & Costello-level horror. But while the legit BEACH PARTY series had the matinee star appeal of Frankie Avalon and Annette Funicello (yum!) to put asses in seats, the imitators dredged up whatever then-popular musical acts they could afford, along with has-been faces familiar from old movies or defunct TV series, and the resulting films were often dire wastes of time. That said, THE HORROR OF PARTY BEACH was made on the ultra-cheap and shot in Stamford, CT (not far from where I grew up), and the closest it could get to any sort of celebrities or popular music act was the Del-Aires, a surf rock band from Patterson, New Jersey. (To be fair, though they were pretty obscure at the time, their surfy stylings were pretty good, and I say that as a lifelong surf music enthusiast.)

When taken as a whole, THE HORROR OF PARTY BEACH is a rather tepid affair with a handful of Del-Aires numbers sprinkled in to keep things from being altogether turgid, but what really sends the picture straight over the top into the annals of bad movie legend is the monsters. These bargain basement Creature from the Black Lagoon wannabes wouldn't even have passed muster as characters on SIGMUND AND THE SEA MONSTERS (1973-1975), what with their googly eyes and mouths that appear to be crammed full of bunless hot dogs. 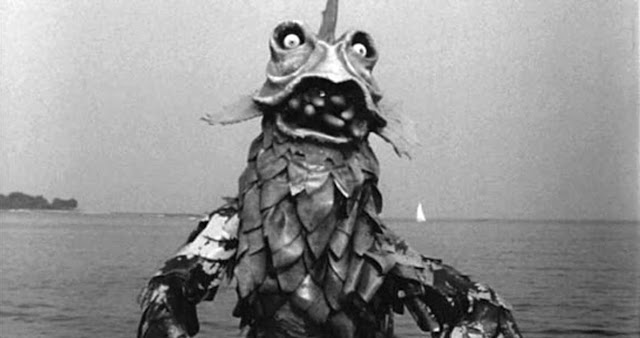 Can your mind withstand the sheer horror???


It's utter trash and not even scary to a nursery-schooler, but I love it in the same way that one loves a particularly stupid mongrel puppy. I recommend checking it out for yourself, especially if you have a few six-packs of beer or a packed bong close at hand, and you have a choice of watching it in its straight release or in the memorable version showcased on MYSTERY SCIENCE THEATER 3000 back in 1997. The film was ripe for the MST3K treatment, and I think their handling of it ranks among the best of the show's efforts. Sheer hilarity from start to finish, with extra points going to the spot-on observation that the leader of the film's allegedly intimidating motorcycle gang is a dead ringer for "sensitive" '50's pop singer Johnny Mathis. 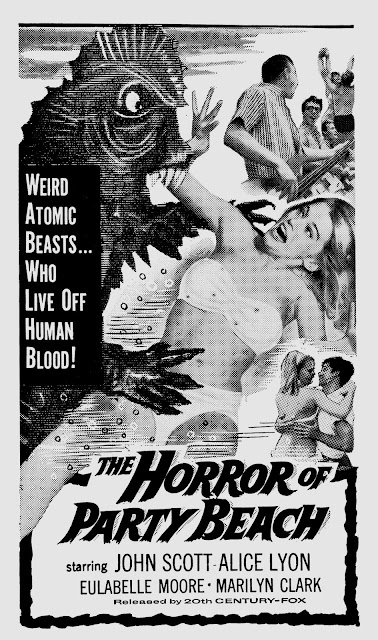