Two young American couples and a pair of foreign tourists are on vacation in Mexico, and one of the foreigners is searching for his missing brother, whose last reported location was at an archaeological dig at a Mayan ruin deep in the jungle. When they arrive at the ruin, they find a stone temple with ascending stairs, covered with lush vines, they are confronted by locals natives who do not speak English, and it's clear that the locals are keeping a safe distance from the site. When one of the girls touches some of the vines, the natives become quite distressed, and when one of the foreigners attempts to move closer and communicate with them, he is remorselessly shot dead. Confused and fearing a similar fate, the tourists runs up the stairs and find themselves at the open top of the temple, where they find the remains of an abandoned camp, presumably the camp of the missing brother and the archaeologist he was last seen with. The camp is right next to a deep, dark pit that goes deep into the bowels of the ruin, and from its depths can be heard the sound of the missing brother's cell phone.  Further attempts to communicate the situation to the locals fall on deaf ears as they keep the tourists held on the temple at gunpoint. The bottom line is that it's clear the tourists have unwittingly stumbled upon something very dire indeed, something that cannot be allowed out past the confines of the temple site, and the locals will not hesitate to kill them to prevent their escape. But exactly what are the natives so terrified of? The answer to that question is quite unexpected and very, very nasty, and the party of tourists is, to put it as mildly as humanly possible, completely fucked beyond all hope.

One of the many things I hate about the MPAA is that it does not respect the intelligence of its adult audience, especially when it actively works to neuter horror films in order to make them more "acceptable" for the lucrative teen audience to see. While not all horror need an R-rating (or beyond) in order to be a scary bit of fun, grownup horror fans often prefer to see such material without its teeth removed, as visceral, gory nastiness has been part and parcel with yarns of terror since the dawn of storytelling. In the case of THE RUINS, the film was released with an R-rating, but the unrated version (available on home video) is really the one you want to see. Once the tourists discover exactly what waits within the ruins, things immediately veer into no-way-out territory and some truly harrowing and downright vicious and gory things happen that whittles down their number one by one. I will not spoil the particulars but I will state that this is a prime example of a 21st century venture into the realm of Lovecraftian horror that is not necessarily meant to be comprehended by man. The threat is an elder presence that's likely been there for centuries, or maybe even millennia, and no answers are given as to its exact nature or where it came from. But whatever the case, it's an exceedingly dangerous entity and the locals are 100% right to want to keep it contained and keep interlopers well away from it, and the unrated version of the film gets that point across beyond the shadow of a doubt. Trimming the gore and violence in order to secure an R-rating robs the film of a significant amount of its hopeless gut-punch power, and exactly who the fuck were the censors protecting, anyway? Grownups are the ones paying to see films clearly marked as being for consumption by an adult audience, so why remove the nastiness from a film whose very purpose is to be scary and viscerally horrifying? The MPAA's criteria for what is or is not acceptable varies from movie to movie, thus making their determinations completely arbitrary, so they can go eat a shopping cart full of medical waste.

THE RUINS comes off Pertwee-era DOCTOR WHO story for adults, and coming me that's a strong recommendation indeed. I know I have not given away exactly what it's about, but please trust me when I tell you that the unrated version of the film is very strong meat that will delight horror fans who appreciate movies that are not afraid to truly go there with hardcore unpleasantness. Absolutely not recommended for beginners or the squeamish, but everyone else should check this one out immediately. An instant classic. 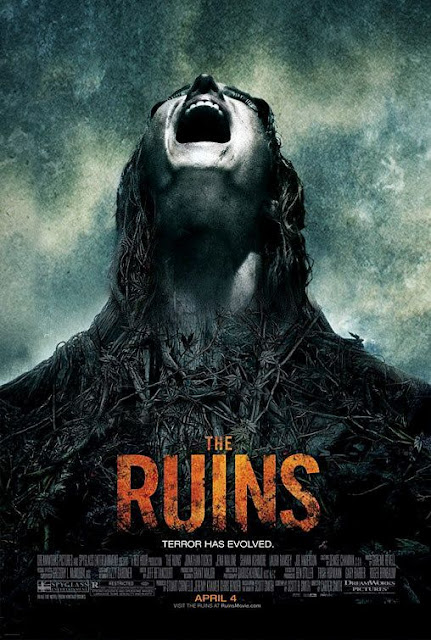 Clearly, I need to see the unrated version, as I saw the R-rated version and was less than impressed. As I recall, it had a lot of good ideas that appeared to go nowhere. Maybe they went under the MPAA's knife instead. Thanks, Bunche!