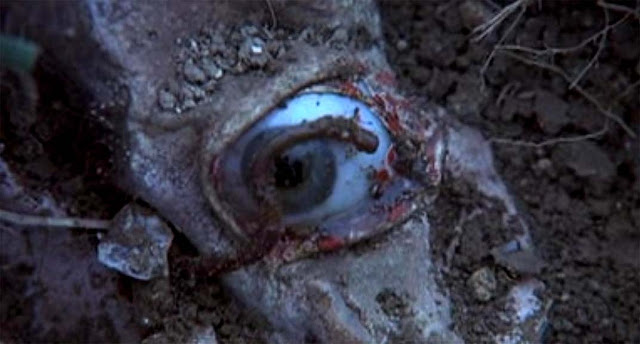 The unearthing of sheer evil.

In 17th -century England, plowman Ralph Gower (Barry Andrews) unearths a portion of some strange creature's skull, complete with an intact eye, and promptly runs to alert the authorities, represented by the local circuit court judge (Patrick Wymark). The judge is an educated man, the antithesis of the sort of magistrates seen in stories of this stripe, so he at first dismissses Gower's claims as mere peasant superstition, but nonetheless allows Gower to take him to the location of the mysterious remains. Upon arriving at the scene, Gower and the judge find the remains are gone, so Gower is disbelieved. From that moment on, the town is afflicted with a rash of insanity among its residents, with the local youth getting up to assorted improper "games," a nasty self-inflicted severing of a hand, and many developing odd and random patches of coarse, dark fur upon their bodies, all while some weird creature lives in the infrastructure of the house where the judge is staying while visiting an old friend. The hairy patches are believed by the still-superstitious peasants to be a sign that those thus afflicted are marked as the Devil's own, and soon many of the local youth are in the thrall of the witchy and seductively beautiful adolescent Angel Blake (Linda Hayden), whose unsavory actions influence the village's teens. Matters escalate as the teens follow Angel and set up a base in some ruins in the nearby woods, from where they launch a campaign of ritualistic murder and mutilation as they harvest patches of hair skin and organs for their unseen "master," who is apparently the aforementioned thing inside the house. It was incomplete, but it comes closer to being fully intact with ever human part stolen and every atrocity committed in its name. Needless to say the judge must get his shit together and go all WITCHFINDER GENERAL on the diabolical evildoers before that weird devil thing is fully incarnate. 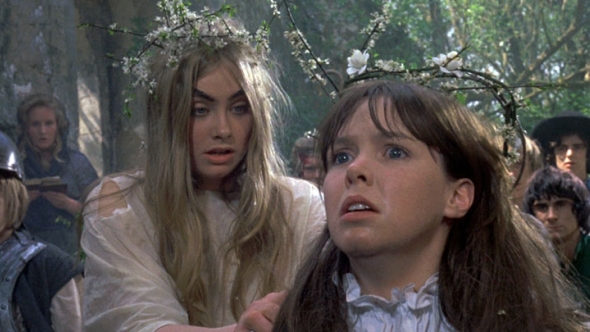 Angel (Linda Hayden) introduces innocent Cathy (Wendy Padbury) to a new game. If you can call her ritualized rape and murder a game, that is...

Falling neatly into the niche that some term "folk horror," THE BLOOD ON SATAN'S CLAW was part of the wave of witch-hysteria films popular in Europe during the late-1960's and early-1970's, with items like WITCHFINDER GENERAL (1968), THE DEVILS (1971), and MARK OF THE DEVIL (1972) being the best-known examples of the form, and it were up to me, it would take the place of the appalling and sleazy MARK OF THE DEVIL on that roster. THE BLOOD ON SATAN'S CLAW is a well-crafted take on the genre's tropes and it surprises in that it's not the festival of over-the-top badly-acted peasants with bad teeth that one expects. The characters are largely rational and relatable, and when things turn diabolical none of the un-influenced behave in ways that do not make sense. Also interesting is how it takes place  just as the witch-paranoia of old is giving way to more level-headed enlightenment, only to have the old fears and superstitions turn out to be wholly justified. 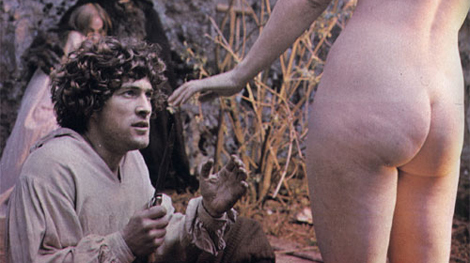 Ralph Gower (Barry Andrews) prepares to offer his skin while enthralled in an unholy ritual.

The story's events unfold slowly and logically, and Linda Hayden's Angel Blake proves an enticing and sinister young witchling indeed. Hayden was born to play sexy roles and she's perfect here as Angel leads a pack of sweet-faced former-innocents into all manner of evil and murderous shenanigans, including luring sweet local girl Cathy into what is pitched as a "new game," but is in actuality the young lass' ritualized rape and savage murder. The tension that builds during that sequence is truly squirm-inducing, and it's made that much more unpalatable by Cathy being portrayed by Wendy Padbury, aka Zoe Heriot from the Patrick Troughton era of classic DOCTOR WHO> Seeing her so brutalized is not something anyone would want to witness, and it's especially hard to see it happen to the much-loved actress who played Zoe. 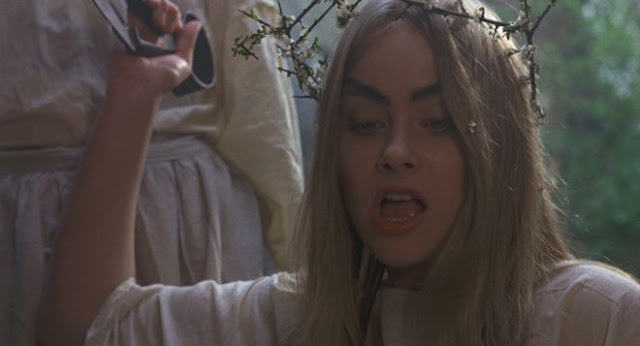 Angel goes in for the ritualistic kill.

Though rather tame by today's standards, and even for its era, especially when stacked against the excesses of its more infamous brethren, THE BLOOD ON SATAN'S CLAW is a solid little piece from Britain's short-lived Tigon studios, and the only element that would earn it an R-rating now would be the full-frontal nudity of Linda Hayden as Angel attempts to seduce the village's religious leader (NOTE: she was seventeen or so when the film was shot and she physically looks it, so exercise discretion when viewing) and the rape of Cathy, which is more disturbing than graphic. Definitely worth your time if you're into films about ye olde schoole witchcraft from the POV when witches were all presumed to be followers of the Devil. 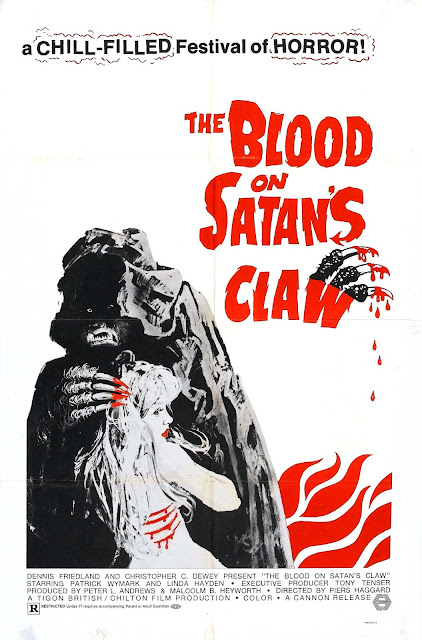