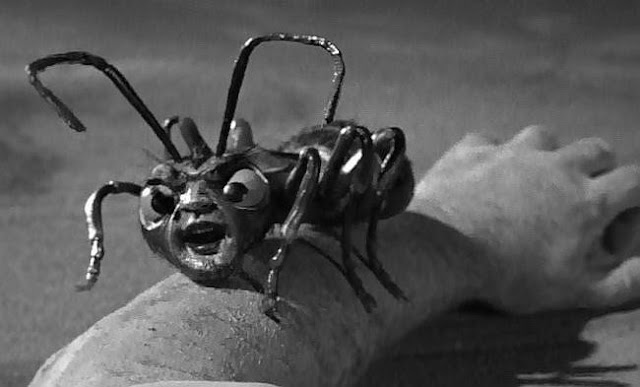 Three words regarding this: Oh, HELL no.

"Throughout history, compassionate minds have pondered the dark and disturbing question: what is society to do with those members who are a threat to society, those malcontents and misfits whose behavior undermines and destroys the foundations of civilization? Different ages have found different answers. Misfits have been burned, branded and banished. Today, on this planet Earth, the criminal is incarcerated in humane institutions.....or he is executed. Other planets use other methods. This is the story of how the perfectionist rulers of the planet Zanti attempted to solve the problem of the Zanti misfits."
-opening narration

THE OUTER LIMITS strikes again, with this classic of child-traumatizing alien invasion. The alien Zantis are described as a discipline-oriented society of perfectionists who cannot bring themselves to deal with the criminals of their species, so they offer technological advances if the Earth agrees to allow the use of a Californian ghost town as a contained place of exile for their undesirables. The only caveats are that the penal ship must not be attacked and the privacy of the Zantis must be strictly maintained, or the technologically superior aliens will deploy "total destruction" against anyone who invades the area. As the Zanti craft prepares to land, a car barrels through one of the cordons surrounding the ghost town. In the car are a bank robber (Bruce Dern) and his female accomplice (Olive Deering), and their intrusion is detected by the aliens, who, feeling betrayed, storm the ghost town's military base (which controls the area's security), resulting in a full-on battle with Earth soldiers. But there's more going on than is readily apparent... 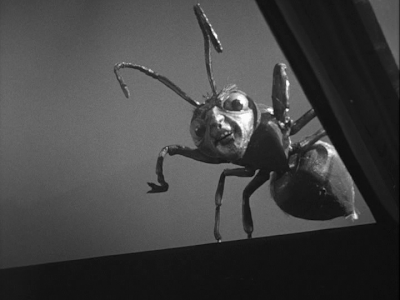 A new dimension to the old bug-on-the-windshield nuisance.

What makes "The Zanti Misfits" a classic is the titular aliens, who are revealed to be hideous ant-like creatures of maybe eight inches in length, bearing large-eyed, leering human faces with evil grins and nasty patches of scraggly hairs. It's a simple design but it's given extra punch by rendering them as stop-motion animated puppets, so when the move they possess that certain "uncanny valley" effect that so often disturbs very young children and sometimes freaks them out too badly for them to enjoy stuff like Sinbad movies featuring the stop-motion wonders wrought by Ray Harryhausen. No joke, the Zantis are nightmare fuel of the highest order, and while they may look kind of silly from an adult perspective, they are among the most indelible, terrifying monsters to those of us who encountered them in reruns during our childhoods. I first saw "The Zanti Misfits" when I was five years old, and I had nightmares about those goddamned ants for the better part of a week. Yet, despite how unnerving I found them, I absolutely loved them, precisely because they had the power to scare the shit out of me. And years later I would draw comparisons to the episode's base-under-siege scenario with that found in the earlier and far more graphic FIEND WITHOUT A FACE (1958). Simply put, a milestone in the annals of kinder-trauma.
Posted by Bunche (pop culture ronin) at Sunday, October 21, 2018