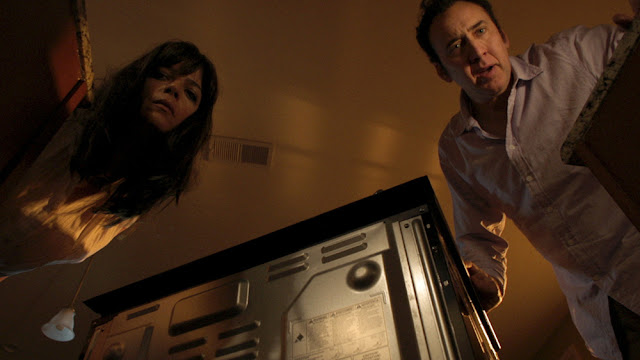 They brought you into this world...and they can damned sure take you out.

Setting: A typical day in suburban America. The Ryans are a normal family whose father, Brent (Nicolas Cage), is in the midst of a full-blown mid-life crisis, while mother Kendall (Selma Blair) feels generally unfulfilled in her role of mom and wife. High school-aged daughter Carly (Anne Winters) displays open contempt for her mother, from whom she steals money, and has a contentious relationship with her younger brother, Josh (Zackary Arthur). Brent does not approve of Carly's boyfriend, Damon (Robert T. Cunningham), due to remembering how horny he himself was during his adolescence, which only adds further fuel to the fire of Carly's distancing from her family. And on top of all of the other usual family mishegoss, Brent's parents are coming over for dinner that evening, but Carly would much rather spend time with her friend Riley (Olivia Crocicchia). But the utter mundanity of their world veers off the rails as the entire community, and perhaps the world, falls under the apparent influence of an unexplained signal transmitted by television that influences all parents to murder their children. To be specific, only  the direct offspring of the affected parents are marked for slaughter, while all others are ignored. The murderous influence kicks off during the school day as hordes of parents show up at Carly's school's gates, which they swiftly storm in homicidal pursuit of their kids. A full-on apocalypse of filicide breaks out and Carly, Damon, Riley, and Josh must fight for their lives against parents that have for no explained reason turned brutally, remorselessly savage. As the film reaches its final act, it's just the siblings and Damon trapped in the Ryan household as mom and dad become the most determined of predators.

MOM AND DAD walks a fine line between outright TWILIGHT ZONE-style shocker and the blackest of black comedy, and as such it works quite well. All the performances are spot-on, with Selma Blair yet again proving she's one of the most believable actors around when it comes to playing people like someone we would know in real life. But the real gold here is spun by my man Nicolas Cage, who is given every possible opportunity to go as over-the-top as only he can, and this time he delivers what may be the most unhinged and literally animalistic performance in a career defined by complete and utter lack of thespic restraint. Seeing him literally howling like a rabid dog while attempting to murder his kids with power tools, a pickaxe, and a re-purposed gas oven is a delight, and he looks for all the world like he's having the time of his life while unleashed. 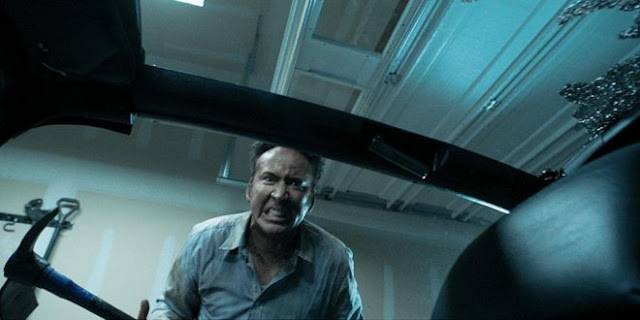 Nicolas Cage at perhaps his most unhinged, which is REALLY saying something.

The film's thrill factor is high and the goings-on get very visceral and nasty, especially a sequence involving Kendall's sister giving birth in a hospital and her immediate homicidal turn once the newborn is in her arms. And along with presenting the horror of the most trusted people in a child's life completely turning against them to a lethal degree, the movie also comments on the release of the pent-up frustration of the promise of one's young life being deferred by the responsibilities and commitments entered into when settling down to start a family, and over time discovering that one's family is not the hoped-for perfect nuclear unit of our dreams. It's crazy as a soup sandwich but all the more relatable for it.

My only complaint about MOM AND DAD is its abrupt ending that leaves everything unexplained, which I did not necessarily have a problem with, but also leaves the scenario unresolved. If you approach it with the knowledge that the story simply comes to a screeching halt and you're fine with that, then I say give it a look. Otherwise, you may find yourself pissed off and disappointed when all is said and done. 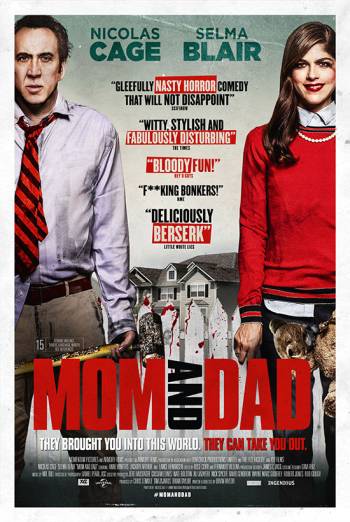