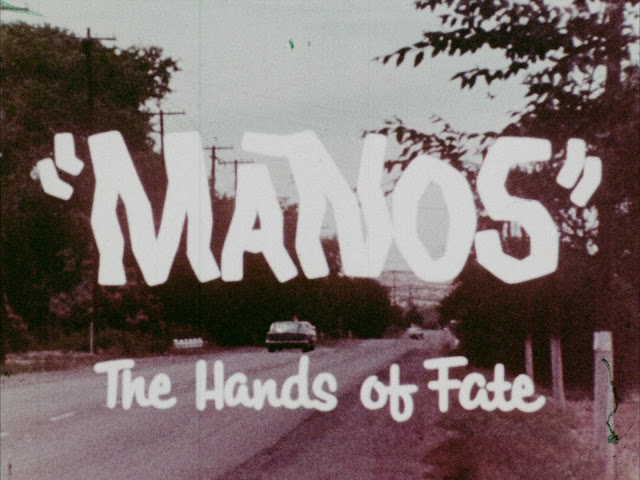 A road trip takes a nasty turn when a family makes its way down a lonesome Texas highway and encounters a creepy house (that's not supposed to exist) populated by what's apparently some sort of polygamous satanic cult led by an undead sorcerer. Sounds simple, right? Oh, it's simple, but the finished film is a cinematic train wreck of epic proportions.

Made on a $19,000 budget by Harold P. Warren, an insurance and fertilizer salesman operating out of El Paso, Texas, the film came about as the result of Warren accepting a bet to make a horror movie. What resulted is unarguably one of the most incompetent works of cinema in history, and those who incorrectly cite PLAN NINE FROM OUTER SPACE as the alleged "worst film ever made" would do well to see it for themselves so they can truly understand just how bad a movie can be in literally every possible way. I shit you not, there is literally nothing in the entire running time of MANOS: THE HANDS OF FATE that could be considered worthwhile, and that is precisely what makes it an object of fascination for me and its legion of gobsmacked fans.

The film  stars absolutely no one of note and every performance is about on par of what one could expect from a live junior high school theater production if the cast had recently discovered the joys of   Percodan and red wine cocktails. Harold P. Warren heads the players as Michael, the father in the hapless family of vacationers, and to call his thespic chops "wooden" would be to insult all trees everywhere. Diane Mahree as Margaret and young Jackie Neyman fill out the mother and daughter roles, but they are simply there to be present and put in the way of the script's meager threats, and they consequently barely register as anything other than manikins. 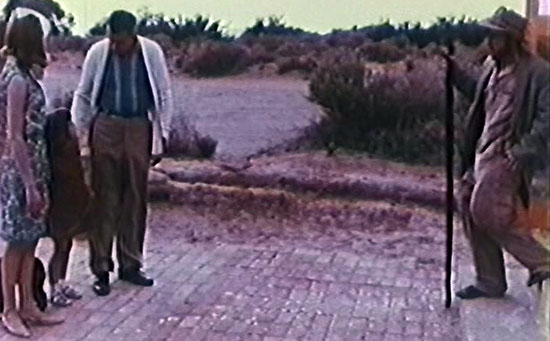 A gathering of thespic titans.

Anyway, upon arriving at the remote house that isn't supposed to be there, the family encounters Torgo (John Reynolds), the place's creepy concierge (or something) who speaks haltingly and staggers around on what appear to be satyr-like goat legs. (At least I think that's what they're supposed to be; the actual effect makes it look as though the actor has stuffed full rolls of paper towels down his pants to serve as exaggerated thigh muscles.) 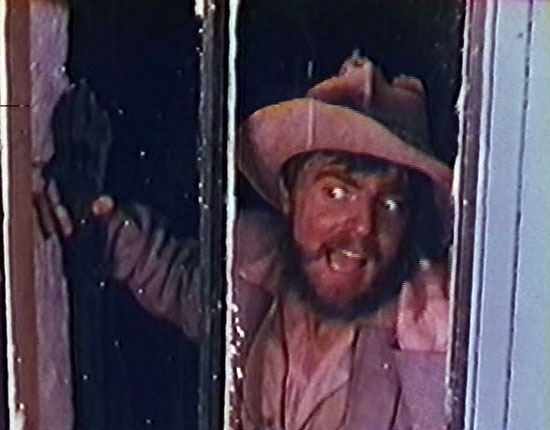 The immortal John Reynolds as Torgo, a performance for the ages.

To put it as kindly as possible, Torgo is one creepy motherfucker, and he informs the family that they are not welcome because "the Master is away," but he almost immediately changes his tune and states "the Master likes you." Understandably weirded out by all of this, the family opts to settle in for the night, but first they simply stand around doing nothing in the lodge's living room while admiring a portrait of the aforementioned Master. Oh, and the Master is also apparently dead, but not, so go figure. (It's never explained.) 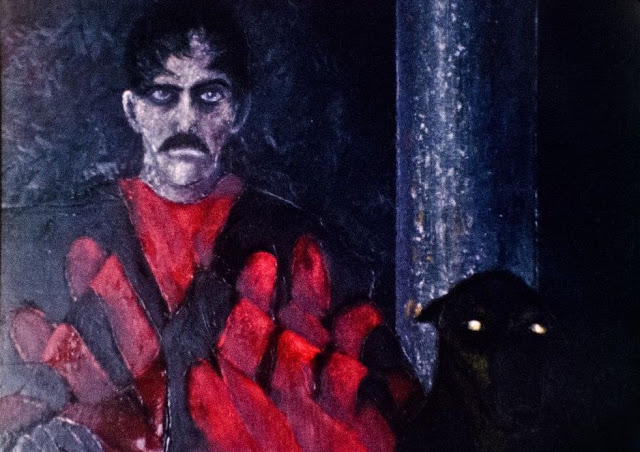 Portrait of the Master (and friend).

As the night progresses, Torgo majorly pervs on the wife in a sequence that induces the douche-chills in all who witness it

and before things can get actually rapey, the Master (Tom Neyman) arrives from wherever the hell he was and decides he wants to add the wife and daughter to his harem of apparently undead wives and servants of the undefined-but-demonic entity, Manos. 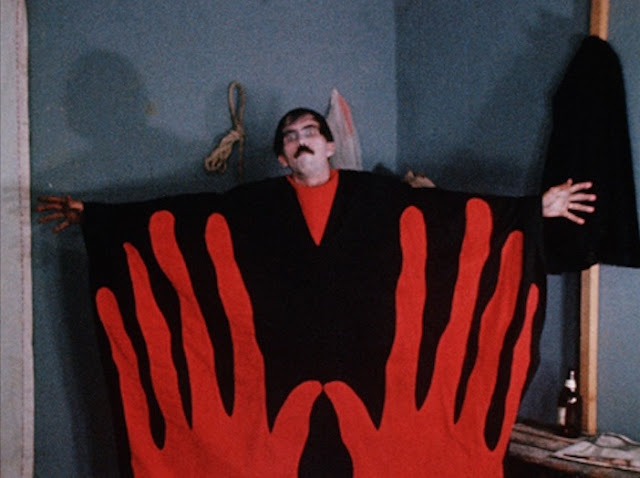 As the movie lurches toward its climax, the family dog is killed by something in the nearby desert, the Master's wives argue amongst themselves and engage in a catfight over whether or not to accept the wife and daughter into their ranks, 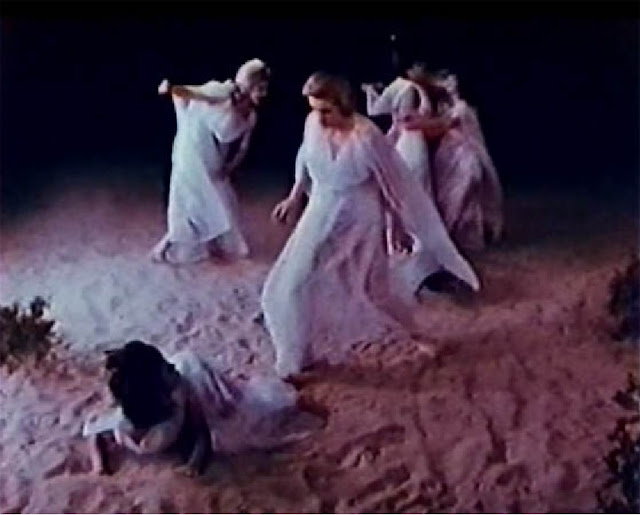 and Torgo gets called out for the pervy shenanigans he perpetrated upon the wives while they lay dormant, so the Master rips off and burns one of Torgo's hands before either banishing him or killing him. (It's not really made clear.) 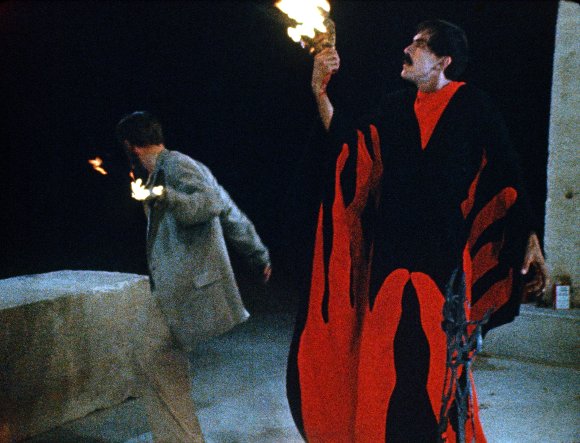 The judgment of Torgo.

When all is said and done, the wife and daughter become brides of the Master (and, by association, Manos), Torgo is gone, and the hapless dad replaces Torgo as the lodge's concierge when two unsuspecting young women drive up to the place. THE END?

What you've just read is MANOS in a nutshell, and my review in no way begins to communicate just what a jaw-dropping complete and utter failure of a film it is. I left out describing the filler material involving a pair of highway cops who repeatedly harass a pair of teenagers who are perpetually caught necking in a sports car, and also did not go into how there are long stretches in which the cast just stands around looking confused while the soundtrack's madness-inducing music punctuates the absolute nothing that goes on. And speaking of the soundtrack, the film's audio was apparently lost or not recorded at all during filming, so the entire dialogue track is overdubbed, thus lending the movie the feel of a poorly-dubbed foreign effort. It seems like time has either come to a standstill or is running backwards as the audience attempts to process what it is witnessing, and at the end one feels like they've just survived a three-day bender in a basement somewhere in Tijuana, fueled by homemade tequila, a few cases of expired Tecate, and several bottles of industrial-strength Mexican cough syrup.  No lie, it is awful, awful, AW-FUL, but once seen it can never be forgotten.

And it must be pointed out that John Reynolds' performance as Torgo has to be seen to be believed. He's weird beyond words and his bizarre, halting delivery is reportedly due to the actor being seriously dosed out of his mind on LSD during shooting, and I, for one, absolutely believe it. Tragically, Reynold's committed suicide at age 25 via a shotgun blast to the head a month before the film's release.  If he had not taken his own life and had lived to see how the movie became a cult favorite upon being re-discovered after its now-legendary airing on MYSTERY SCIENCE THEATER 3000 in 1993, he'd have been hailed as bad movie royalty and would have made a fortune on the convention autograph circuit. Anyway, MANOS is a must-see piece of cinematic detritus that only the most hardcore of bad movie enthusiasts tend to make it all the way through. Are you one of that hardy breed? Attempt the film for yourself and find out... 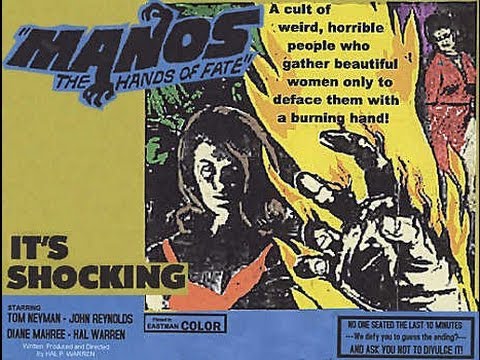