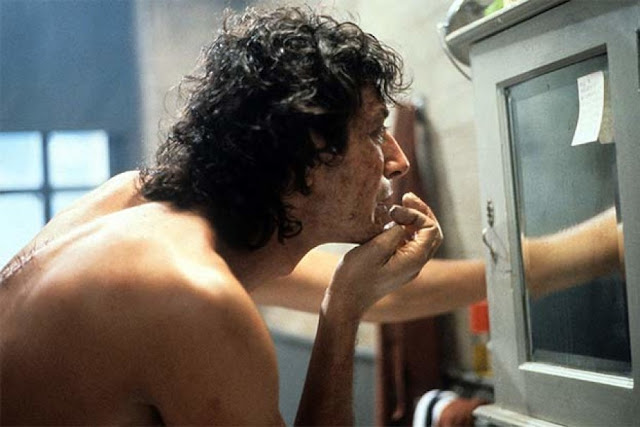 The erosion of one's humanity is NOT a pretty thing.

Brilliant, quirky scientist Seth Brundle (Jeff Goldblum) invents mankind's first teleportation system, which he clues scientific journalist Veronica Quaife (Geena Davis) in on, but he has yet to sort out how to successfully teleport living tissue without lethal results. Seth and Veronica enter a sexual relationship and, inspired by their lovemaking, Seth figures that he has to make the teleportation program "crazy for the flesh." Exactly how he achieves that is conveniently glossed over, but succeed he does, utilizing a live baboon as a test subject. Acting hastily, Seth opts to use himself as human subject and successfully transports himself. At first, all seems well, but he soon develops greater levels of physical strength, agility, and stamina, as well as becoming more violent and aggressive while parts of his body sprout thick hairs. Veronica dumps him once his personality begins to change for the worse, but before she leaves him she snips off some of the hairs, has them analyzed, and discovers an unexpected, horrifying complication to Seth's self-transmission: Unbeknownst to Seth, a common housefly had made its way into the telepod with him and, unsure of how to proceed when faced with information on two different DNA readings, the program solved the issue by merging the human and housefly DNA on a molecular level. In other words, Seth is now mutating into a hybrid creature that he self-mocking dubs "Brundlefly." As the transformation progresses, Seth's humanity erodes on a daily basis, and his body becomes a truly disgusting mass of oozing sores and pus, eventually shedding its superfluous components as the new creature comes to the fore. And then Veronica finds out that she's pregnant by Seth, and the baby may have been conceived after he went through the telepod...


I grew up as a massive fan of the original, waaaaaaay more genteel 1958 version of THE FLY, considering it to be one of the sci-fi/horror blends that most deeply affected me as a child due to its ponderings on possible dire consequences of man tampering with the infinite and that shattering (and,  in retrospect, totally ridiculous) ending, so I approached the 1986 remake by David Cronenberg with no small amount of trepidation. I greatly enjoy much of Cronenberg's filmography, with him having carved a place for himself in movie history as the Hitchcock of "body horror," but my childhood attachment to the 1958 was too strong for me to have the blind faith in him that I should have. There was perhaps no other living director at the time who was better-suited to the task of updating the admittedly hokey material for the 1980's and really, really taking the audience there with a script that was absolutely adult and bolstered by some of the best and most nausea-inducing practical effects this side of John Carpenter's take on THE THING (courtesy of Chris Walas). Seth Brundle's loss of humanity and descent into Brundlefly are simultaneously terrifying and completely tragic, as we come to know and rather like Seth as something of a "cool nerd" type, and his romance with Veronica is something the audience genuinely cares about. Seth Brundle is one of Jeff Goldblum's defining performances, and Cronenberg perfectly exploits his singular thespic flavor while keeping his sometimes-goofy "Goldblumness" in well-considered check for the sake of the story he's telling. This is Goldblum at his most believably quirky while not veering into cartoonish sitcom scientist territory, and it's a stunning performance.

Just as good as Goldblum is Geena Davis, whom I have long maintained was nearly always a better actor than the material she was often given deserved. Tall, unfairly lovely, with those huge doe eyes and arresting smile, she also always communicated a fierce intelligence that marked her characters as different from and more interesting than her actress contemporaries in the '80's. If I knew she was in a movie, regardless of genre, my ticket money was guaranteed, and it galls me that she never received the credit that she is due for damned near every part she played. Veronica Quaife is an interesting take on the Lois Lane-style go-get-'em female journalist, and the audience falls in love with her right along with Seth. Veronica's clearly in her element when dealing with fellow sharp-minded people, and her being shown by the script to be smart was a welcome change of pace from the usual parade of '80's eye-candy in horror movies. And I would like to note that Davis utterly sells what is, to me, one of the most revolting sequences in film history, namely when she lucidly imagines going into a hospital to have Brundlefly's baby aborted, only to — much to the understandable complete and utter horror of herself and the surgical team — give live birth to a slimy, bloody, writhing, two-foot maggot. 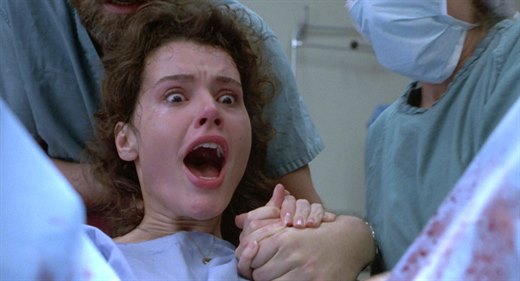 When birth is the polar opposite of a miracle.


In a film full of nasty, blow-your-lunch visuals, that sequence gets my vote as the true showstopper, when one pauses to consider its implications were it to occur in real life. It's just plain horrible, and even though I do not possess female reproductive equipment, I swear to whatever gods there may be that when I saw this film on opening night, just a couple of months after I turned 21, I could feel that mucous-slathered larva wriggling its way out my own nether regions.

In short, Cronenberg's THE FLY is not only at the top of the heap when it comes to the best cinematic remakes, it's also on my personal short list of the best horror films ever made and one of my favorite movies of any kind whatsoever. An instant classic, this one get my HIGHEST RECOMMENDATION. 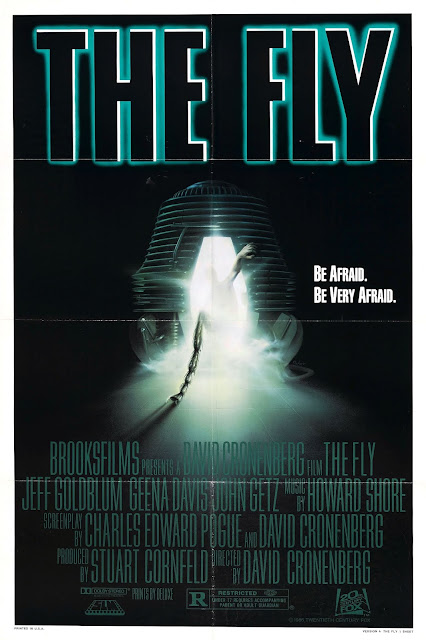