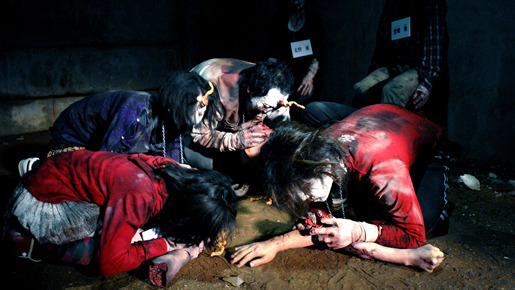 Fun with the zombie apocalypse!

I can't speak for you, but the glut of zombie movies over the last twenty years or so just leaves me baffled, and the majority of those films (and other media involving zombies) largely leaves me cold. Most of it is content to simply be cookie-cutter rehashings of the same old "living refugees versus hordes of undead flesh-eaters in an isolated location" scenario, and more often than not little or no imagination is put into what's being crapped out for the audience. Exceptions like the superb TRAIN TO BUSAN are as rare as tits on a trout, and that's proof that the genre is not bereft of life, especially if talented filmmakers with imagination are at the helm. Such is the case of director Yoshihiro Nishimura's delirious HELLDRIVER.

The plot in a nutshell: A symbiotic extra-terrestrial life form sets off a cannibalistic zombie apocalypse that's localized to Japan, causing the country to be divided by a wall separating those who are infected and those who aren't. After her extra-terrestrially-possessed mom literally rips out her heart to replace her own that was blown out during the alien's arrival, schoolgirl Kika (Yumiko Hara) is reborn as a swordfighting badass with a chainsaw katana powered by her artificial heart. 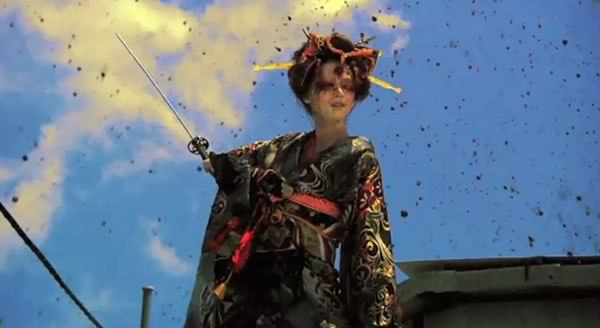 Pressed into military service and tasked with tagging her now deity-level mother, Kika and a ragtag band of unlikely heroes are sent into the infected half of the country on a roaring rampage of virtually non-stop carnage, gore, and generally hilarious over-the-top live-action cartoon mayhem. It's a tad over-long with its nearly two-hour running time, but it is the most wall-to-wall series of ultra-gory set pieces I've ever witnessed, due to the film piling ultra-violence upon gore atop more ultra-violence. Plus it's an intentional laugh-riot from start to finish! In short, it's the Japanese answer to Peter Jackson's hilarious gore-orgy, DEADALIVE (which I have to get around to covering, possibly next year). HELLDRIVER is an exercise in gory, utterly over-the-top madness in the flavor that only the Japanese can bring, and I, for one, welcome films of its level of sheer insanity with open arms. The cornucopia of geysering arterial spray, severed limbs, flesh-devouring undead, and other mayhem on display here is truly jaw-dropping, and I would be doing you a grave disservice by giving away any of its crazy specifics. It's something that must be seen to be believed and appreciated, so I strongly advise you to check this one out immediately. Seriously, this is an absolute must-see. 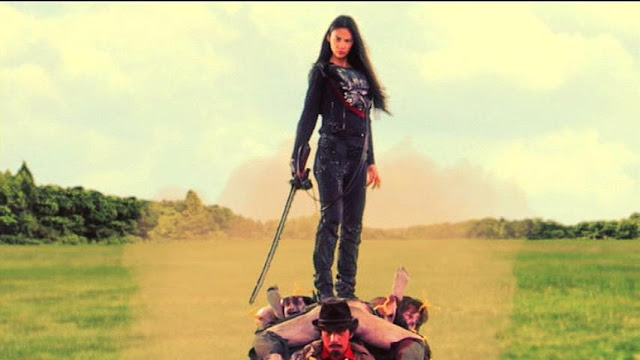 Kika rides the wasteland on a muscle car composed of severed human limbs. No, seriously.

When HELLDRIVER had its American premiere at NYC's Japan Society in 2010, my dear buddy Gil Sonic invited me along, and I was delighted by what I got. And as if my first exposure to the film being seeing it in its fully uncut version wasn't sweet enough, the director and some of the cast were on hand as well for a spirited meet and greet with the audience. 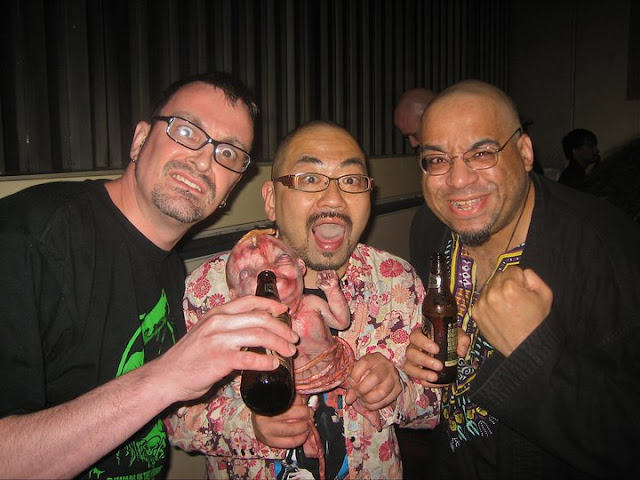 (L-R) Gil Sonic, director Yoshihiro Nishimura (with the film's hilarious/disturbing zombie baby, that I did not mention in the review), and me. 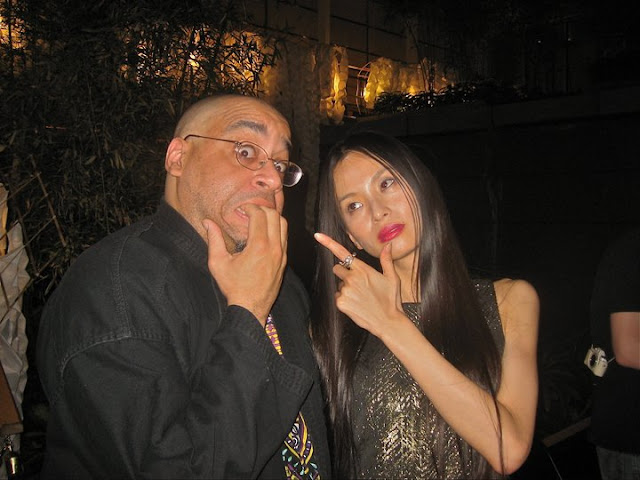 Me with Eihi Shiina, who played Kika's zombified mother. She's best known in the U.S. for her terrifying role in Takashi Miike's 1999 instant classic of horror, AUDITION. If you've seen that film, you know EXACTLY who she is. 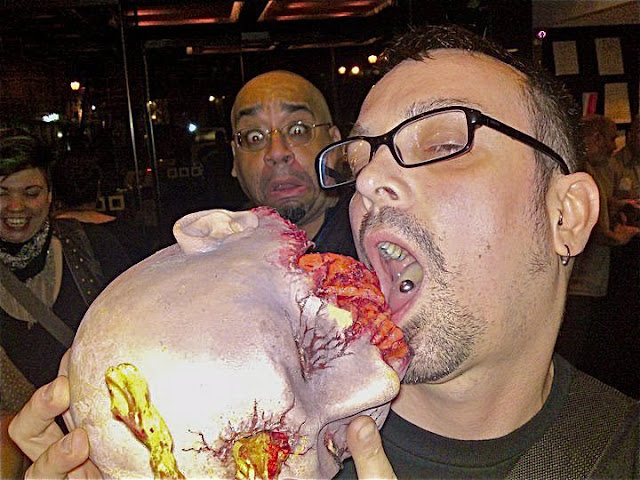 Gil finds love in all the wrong places while I look on in horror. 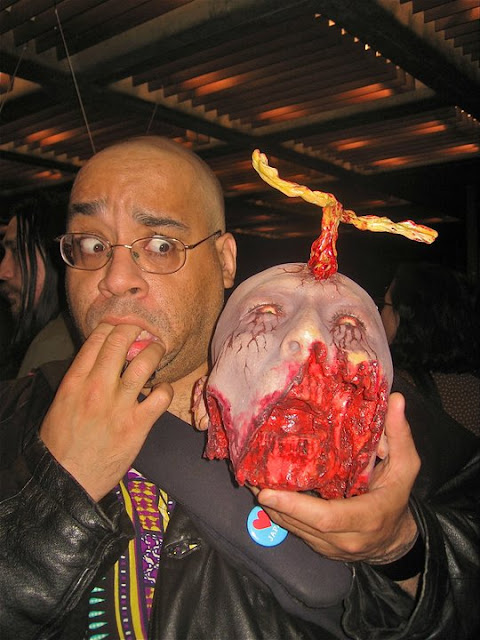 Me with one of the film's prop zombie heads, complete with alien antenna. 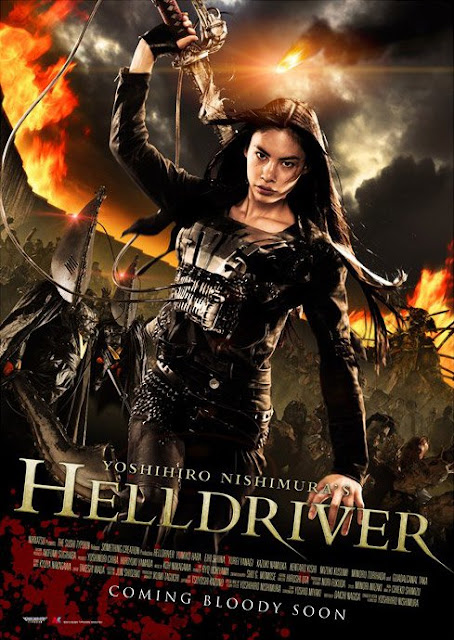 Clearly, THAT one moves to the top of my list for the more-or-less-monthly "Blood and souls" movie days with my best bud, Inky.

* INSIDE - a favorite of mine from that genre. Inky had not seen it before, but I had; she adored it;

* REVENGE - sort of a cross between I SPIT ON YOUR GRAVE and THE CROW, but a better movie than both; I liked this one enough to buy my own copy of it, and Inky was delighted by it); and...

* THE HORDE - essentially DAWN OF THE DEAD meets THE RAID while ATTACK(ing) THE BLOCK in France; gory, ultraviolent and fun, but not nearly as good a film as INSIDE or REVENGE.

I'd be curious to see your take on a few French Extremity films. I seem to recall you reviewing HIGH TENSION a few years back, but I'm not aware of you addressing any other films from this surprisingly high-quality breed of hypergory films.

I saw THE HORDE and found it to be okay, but not worth seeing again. I am soooooo done with zombies...