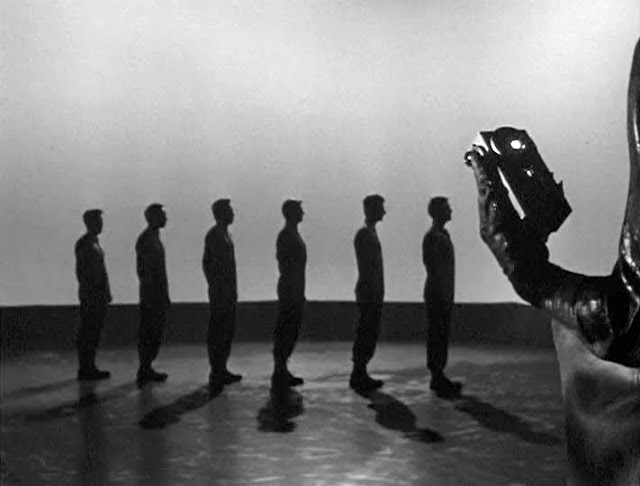 Prisoners of war in an inter-planetary conflict.

"A war between worlds has long been dreaded. Throughout recent history, Man, convinced that life on other planets would be as anxious and belligerent as life on his own, has gravely predicted that some dreadful form of combat would inevitably take place between our world and that of someone else. And Man was right. To the eternal credit of the peoples of this planet Earth, history shall be able to proclaim loudly and justly that in this war between Unified Earth and the planet Ebon, Ebon struck first. Ebon: Its form of life unknown, its way of life unpredictable. To the fighting troops of Earth, a black question mark at the end of a dark, foreboding journey."
-opening narration

Six international soldiers from the forces of the U.E. (Unified Earth) find themselves prisoners of war held by the tall and foreboding Ebonites, an alien race that launched an unprovoked nuclear attack on the Earth, and they are put through "exploratory interviews" by their imposing captors. Those interviews amount to physical and psychological torture that tests the soldiers to their limits and then some, fraying their nerves and stripping down their trust in one another before things turn lethal. 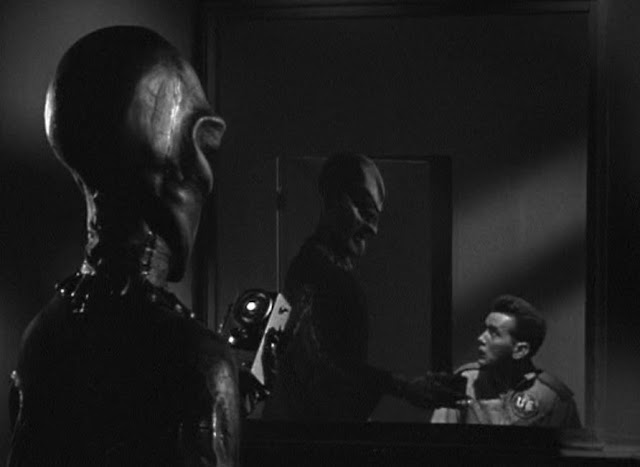 But is everything really what it seems? Questions are raised among the prisoners, and the answers are not pretty... 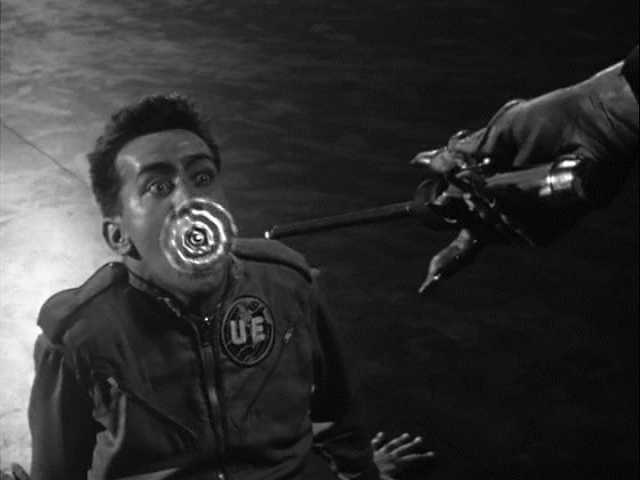 Private Dix (a young Martin Sheen) is robbed of his voice.

The way many of my generation hold great affection for the stories found on THE TWILIGHT ZONE (1959-1964) after decades of syndicated reruns, I carry a torch for the much darker science-fiction entries from THE OUTER LIMITS (1963-1965), many of which prove beyond the shadow of a doubt that the line between sci-fi and outright horror can be very thin indeed.

"Nightmare" is a memorable case in point, proving eerily relevant by airing during a period when the United States' involvement in the Vietnam War. In the years to come, real-life soldiers would face unspeakable abuse at the hands of the Vietnamese enemy, and seeing "Nightmare" with the hindsight of history over a half-century later, its cruelty is that much more disturbing. The small cast makes the most of the taut script and sparse, expressionistic sets, and the tension and fear mounts believably, despite the fantastical elements. Particularly notable are a young Martin Sheen as Private Dix, the first soldier to lose his shit when confronted with the threat of the Ebonites' tortures, a state that only escalates as events proceed, and the always good and criminally-underrated James Shigeta as Major Jong, whose ability to keep his head while under the considerable pressure of the situation makes him suspect as a traitor.

Of the episodes of the series that I saw during my impressionable years, "Nightmare" is one that stands out, as the look and voices of the aliens creeped me the fuck out, while the relatable nature of the soldiers' peril served as one of the early influences on my anti-war/torture views. Any way you cut it, war is a shitty state of affairs, and the reveal at "Nightmare's" conclusion absolutely drives that point home, with the Ebonites surprisingly displaying more humanity and decency than the representatives of Earth's military brass. It's low on action but rich with tense content. Of the OUTER LIMITS' complete run, "Nightmare" is one of the undisputed classics, more for its intensity than for the monsters/aliens the show became legendary for.
Posted by Bunche (pop culture ronin) at Saturday, October 20, 2018