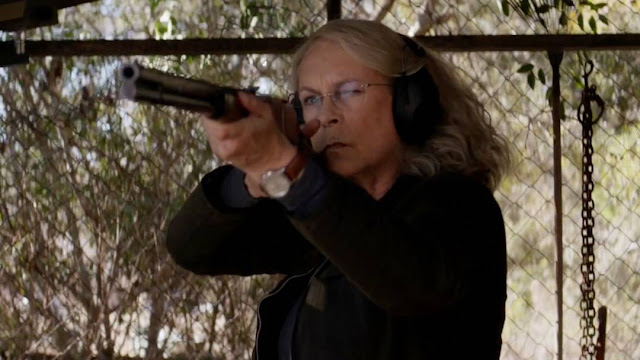 Laurie Strode (Jamie Lee Curtis) is back: She's had four decades to prepare for this inevitable showdown, and she is NOT fucking around.

Michael Myers, the infamous perpetrator of the Haddonfield babysitter murders of 1978, has spent the last forty years under maximum security psychiatric care, remaining utterly silent the entire time, and he now awaits transfer to another facility with fewer amenities. A pair of British podcasters gain access to interview him but he remains as taciturn and unresponsive as ever...until the male fuckwit of the British pair whips out Michael's signature William Shatner mask (which has spent decades in police evidence storage) in hope of eliciting a response.

Seriously, is it ever a good idea to "poke the bear?"

When the masked reminder seemingly fails to provoke the desired break in Michael's silent treatment, the Brits go with Plan B and instead attempt to interview Laurie Strode (Jamie Lee Curtis), who memorably tangled with Michael and survived that horrific Halloween night in 1978. Now living as a recluse in a remote house that's tricked-out with all manner of home security, surveillance cameras, and a well-stocked safe room complete with an armory that would make even the most fanatical of survivalists cream their jeans, Laurie makes it clear that she's unwilling to spill her guts to the two Pommie podcasting morons and promptly boots them from the premises. We also learn that Laurie has a grown and happily married daughter, Karen (Judy Greer), who was taken away at age 12 by Child Protective Services due to concerns over Laurie being an unfit mother. Karen's childhood, from ages 8 through 12, was essentially a non-stop regimen of training and preparedness-enforcement should the day ever come when Michael Myers escapes, and despite all of the comprehensive combat training that she received from her mother, even Karen was convinced that her mom was simply a paranoid basket case. Their adult relationship is one of tragic estrangement — made more heart-wrenching because we, the audience, know that Laurie is absolutely not insane or paranoid, and the way she tried to raise her daughter was an act of deepest love and caring — but Laurie maintains a positive (if somewhat strained) connection with her college-bound grand-daughter, Allyson (Andi Matichak).

Then, on October 30th, Michael's transfer takes place and the bus bearing him and other inmates crashes — whether the crash was caused by Michael is not made clear — which allows him to escape, and in no time he begins killing his way through Haddonfield after snagging a new mechanic's jumpsuit and retrieving his mask. (Do I really need to tell you things do not work out well for our visitors from across the pond?) Halloween rolls around and Laurie's worst fears become bloody reality, as her long-overdue reckoning with Michael comes to a head, only this time involving three generations of Strode women. 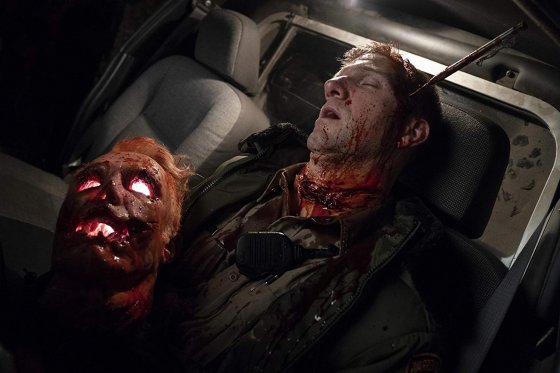 Just one of the film's memorable kills.

If you, like me, have stuck with the HALLOWEEN franchise through all of its installments, you know that every one of the sequels to John Carpenter's 1978 slasher landmark mostly suck out loud, to varying degrees — with the sole exception being the unfairly maligned HALLOWEEN III: SEASON OF THE WITCH (1983),  which had nothing whatsoever to do with Michael or Laurie — so one has every reason to approach yet another HALLOWEEN sequel with the bar of expectations set about as low as a snail's dick. With that caveat firmly in mind, allow me to state in no uncertain terms that HALLOWEEN (2018) is easily the best of the direct sequels, by a goddamned landslide. That's admittedly not saying much, but the current installment does what it sets out to do, which is to wisely erase every film in the post-1978 canon continuity from memory and set the current chapter as the point from which the tale of Michael and Laurie truly continues. It's always fun to see Jamie Lee Curtis return as Laurie Strode, and she's especially entertaining here as she's in full-on Sarah Connor mode. Hell, that only makes sense when one considers what she endured in the first film, and you had better believe that she proves to be one utterly badassed opponent for the ever-deadly Michael. And while there's no Dr. Loomis in this one, since good ol' Donald Pleasance croaked during the reshoots for the monumentally ludicrous HALLOWEEN: THE CURSE OF MICHAEL MYERS (1995), he's replaced with Dr. Sartain (Haluk Bilginer), who, for no adequately explained reason, is a Dr. Loomis/Donald Pleasance sound-alike. Oh! And it should also be noted that viewers should pay attention to the kids running around Haddonfield on Halloween night. Among them are a trio rocking the Silver Shamrock skeleton, witch, and Jack o'lantern masks from HALLOWEEN III: SEASON OF THE WITCH, but you'll miss them if you blink.

The film itself is just right as a season-appropriate confection, but it is by no means a masterpiece. To audiences well-steeped in cinematic horror, it offers nothing new or surprising, relying on what one would expect from the purported final showdown (yeah, right) between the protagonists to put asses in seats. As such, it is satisfying enough and definitely worth sitting through, but do not go into this expecting anything close to the suspense to be had from the original HALLOWEEN. What we get instead are a number of very brutal, visceral, and memorable kills from one of cinema's signature boogeymen, and the audience I saw it with ate it up like the thrill ride that it is. It's definitely made for an undemanding audience, but sometimes one craves an order of Chicken McNuggets instead of chicken cordon bleu, and HALLOWEEN (2018) definitely counts as palatable horror movie junk food and it's a better-than-average example of the garden variety slasher gore-fest. 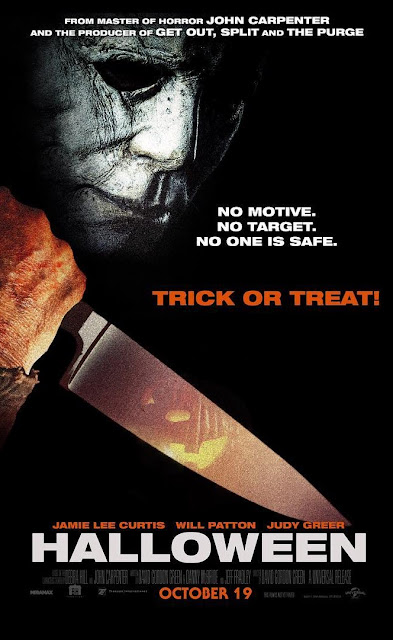 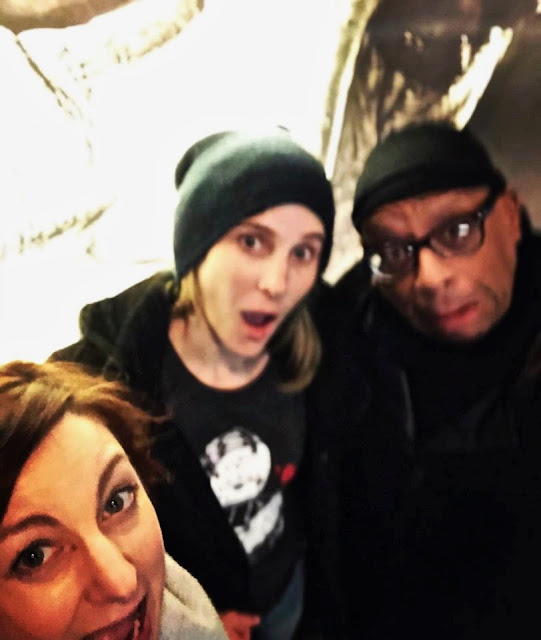 (L-R) Suzi, Eryn, and myself, just after seeing the film at the Regal Court Street Stadium 12.
Posted by Bunche (pop culture ronin) at Friday, October 19, 2018

Thanks, Bunche. I guess I WILL go see this one, then.