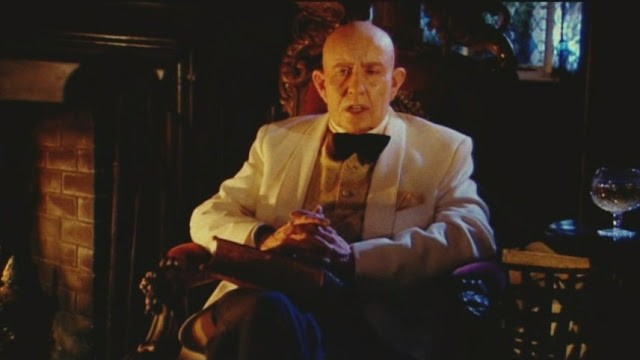 "Sapphical vampiricism, the love which dare not spell its name. 'But surely,' you say, 'there's no such thing as vampires or lesbians. But what's that under the bed? And who's that in the closet?"
-Dr. Terrible

Upper Carpathia, 1877. As a newlywed couple rides to their honeymoon through the dark woods, a pair of hot women in diaphanous gowns eagerly swap spit, but one of the espied lovelies is...a vampire!!! Anyway, upon arriving at the Hammerstein Inn (I see what they did there), dashing young Captain Hans Brocken (Steve Coogan) of the 23rd light rapier dragoons and his bride, Carmina (Sally Bretton), are at first turned away by Grebenor (Ben Miller), the creepy (and rather fey) caretaker, but he relents when he realizes that Carmina is a virgin of the purest order. 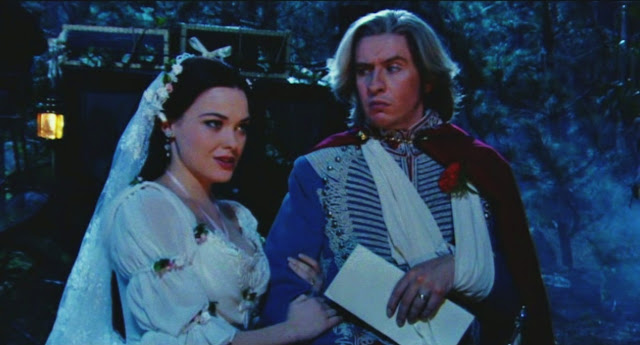 Grebenor suggests that the lovebirds stay at the ominous and ludicrously fog-enshrouded  Castle Kronsteen instead, and once there they are surprisingly greeted again by Grebenor before meeting Countess Kronsteen (Ronni Ancona), whose every aspect simply screams "I may not be Ingrid Pitt, but I'm sure as hell a sapphic undead suckface," and Ingrid (Anouska Bolton-Lee), her, um..."companion." 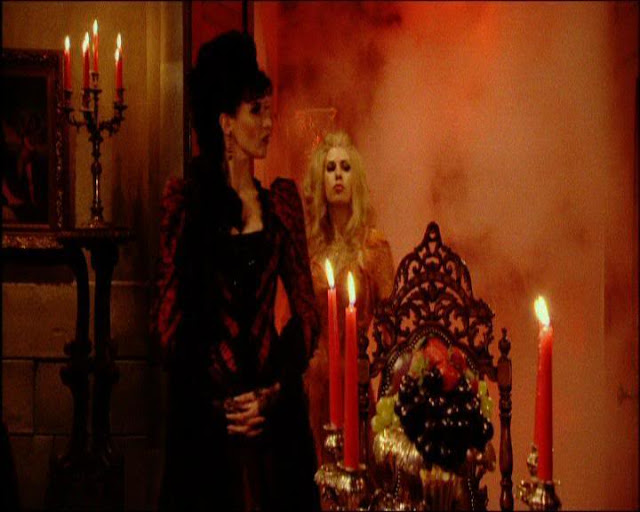 Vampires and — even more diabolical — lesbians.

During dinner, Hans attempts to regale the Countess and her minions with tales of how he injured his arm in war against cossacks — accounts that bear distinct overtones of implied buggery and suchlike — while the Countess targets the virginal Carmina as her next immortal inamorata. But before the Countess can put the bite on Carmina, she avails herself to a snack consisting of pious and nubile twins (Hayley and Sarah Henderson), whom she joins as they frolic naked in an a stream in the nearby woods (at night, no less). Oh, and upon witnessing the shenanigans in the stream, the twins' Monsignor uncle dies "of fright...From fear!!!" Meanwhile, Hans' plans for a long-awaited wedding night romp with Carmina are thwarted when she is drugged by Grebenor and as a result lays unconscious all night, an ingenious bit of cock-blocking by the Countess to ensure that Carmina remains unsullied until the time is ripe for the Countess to pounce. 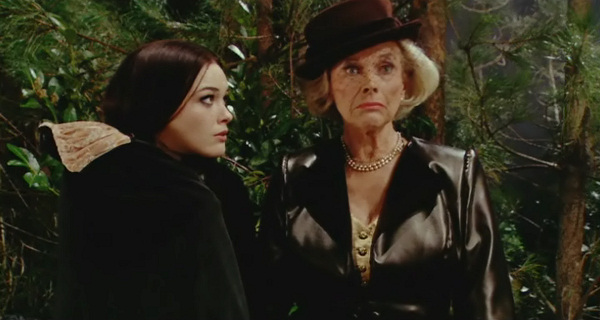 Then, as if things were not already convoluted enough, into all of this strides Transeet Van Eyre (Honor Blackman), an elderly, leather-clad woman who seeks to rescue the twins, if she can, and whose every aspect fairly screams, "I may not be Peter Cushing, but I'll kick a vampire's motherfucking ass!!!" and from there matters escalate as the Countess makes her move while Hans faces lingerie-clad vampiric temptation and Van Eyre gets down to the serious business of vampire-slaying.

Trotting out damned near every trope established by Hammer Studios' Karnstein trilogy of the 1970's — THE VAMPIRE LOVERS, LUST FOR A VAMPIRE, and TWINS OF EVIL — (with only slightly less nudity), "Lesbian Vampire Lovers of Lust" works in the vein of YOUNG FRANKENSTEIN-style satire of a beloved horror flavor, this time with the sights set on Hammer films rather than those of the classic Universal horror cycle. Episode Five in the six-episode British horror-comedy anthology television series DR. TERRIBLE'S HOUSE OF HORRIBLE (2001), this installment is a very funny half-hour-long avalanche of knowingly-deployed cliches and innuendo, and it's especially effective if one has recently seen all of Hammer's Karnstein trilogy of sexy vampire movies. Coming late in the run for the legendary studio, the Karnstein films were replete with the kind of skin-baring "sauce" that the British have long been masters of, and when coupled with Hammer's signature art direction, atmosphere, and then-shocking gore, the formula swiftly veered into the territory of unintentional self-parody and left Hammer's works with the inaccurate image that all of their films wallowed in lurid content. In other words, it became ripe for parody by creators who knew the films inside and out and could humorously take long-overdue jabs at them from a place of genuine affection. The episodes of the DR. TERRIBLE'S series applied that approach to having fun with the flavors, tropes, and signature stylistic touches of assorted U.K. horror studios with mixed results, and this episode is definitely one of the best of the lot. It's a letter-perfect lampoon and features memorable bits throughout, with highlights including:
And of course, the always-welcome presence of Honor Blackman as self-described "undead-hunter" Transeet Van Eyre. She's a treasure in damned near every role she essays, but she gained screen immortality and eternal film-junkie favor as Hera in the Ray Harryhausen Greek mythology masterpiece JASON AND THE ARGONAUTS (1963), and of course as Pussy Galore in GOLDFINGER (1964), the film that truly set the template for what we think of when we think of pretty much all of the carved-in-stone elements to be found on a 007 film.

Unfortunately DR. TERRIBLE'S HOUSE OF HORRIBLE has not, to the best of my knowledge, been aired in the United States, so if you want to see it, you'll have to invest in an all-regions DVD player and the U.K.-issued Region 2 DVD of the six episodes. Definitely recommended for fans who know their way through pre-1980 British horror and who appreciate played-straight ridiculousness.
Posted by Bunche (pop culture ronin) at Sunday, October 28, 2018