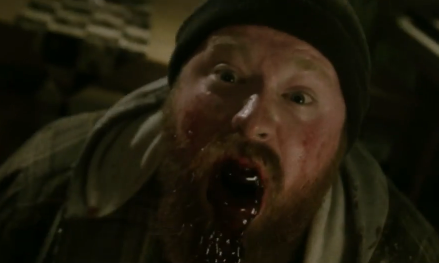 Mark (Josh Ethier) was not quite the same after his return.

On October 13th, 1987, in the small town of Patten, Maine, a desperate Seth Hampton (Graham Skipper), makes his way to the home of his friend Mark (Josh Ethier), claiming to have been driving with a friend who was taken into the sky by a beam of blue light. Mark's fiancee, Jen (Vanessa Leigh), is also present, and both are understandably skeptical at Seth's story...until the area is suffused with the aforementioned blue light, this time accompanied by ear-splitting, other-worldly sounds. As Seth and Jen shield their ears and begin to bleed from their noses, Mark stiffens, stands up, and marches outside, where vanishes after being consumed in a shaft of light. Nearly two years pass and the events of that evening remain unexplained, with Seth now suffering from nightmares and nosebleeds and having been at one point under suspicion for the disappearance of Mark and the friend that he spoke of driving with. Jen has moved on and is now engaged to a new guy, but both she and Seth have an eerie feeling of something once more not being right, as the strange lights and sounds of two years previous once again manifest.

Coinciding with the strange phenomena, a nude and crud-festooned Mark is found in the woods by a pair of hunters. The men attempt to rouse Mark, only to have him jolt awake, let out an ear-splitting, non-human howl, and brutally slaughter them. Adorning himself in the clothes of one of his victims, Mark launches on an implacable spree of gory murder as he makes his way home in search of Jen. Mark also harvests the bodies of his victims — those that aren't too damaged, that is — for sinister purposes, and it soon becomes clear that what has returned is not exactly Mark. Unseen aliens abducted Mark on that night two years ago, and subjected him to a series of unexplained but apparently agonizing experiments/alterations before dropping him back to Earth, and once he's back his agenda is single-mindedly focused on alien invasion via insemination and assimilation, and his mind is set on reuniting with Jen. The paths of the seemingly unstable Seth, the unstoppable Mark, and a horrified Jen collide  at Mark's former residence, and the results are far from genteel.

A welcome stylistic throwback to the sci-fi/horror blends of the '80's, like John Carpenter's THE THING, and with INVASION OF THE BODY SNATCHERS (1956) and NIGHT OF THE LIVING DEAD (1968) serving as templates, coupled with generous helpings of very nasty and visceral murder, ALMOST HUMAN is an independent low-budget gem that seems to have somehow flown under the radar of most horror fans, and I only heard of it because a buddy of mine, Chuck Doherty, is in the cast (as Clancy the hardware store owner). Chuck invited me to the Fangoria screening of the film at Manhattan's IFC Center back in February of 2014 and I enjoyed the film very much, but somehow never got around to reviewing it and spreading the word of its quality. Hopefully this review will go a ways toward redressing that wrong.

The performances are all good, in fact I dare say that they are way better than expected for what at first looks like it could be just another run-of-the-mill low-budget shocker, with the three principals all being utterly convincing in their roles. I was especially impressed with how Josh Ethier's simultaneously subdued and savage portrayal of Mark perfectly communicated how the character had returned as a focused, alien-influenced engine of murder, and he's a truly unsettling presence. The film's gore and violence is as brutal and shocking as it should be, with plenty of lovingly-depicted splattery practical effects. And there's a particularly invasive attempted alien insemination involving Jen on the receiving end that will make every female in the audience squirm for all she's worth.

Absolutely worthy of rediscovery, ALMOST HUMAN stacks up impressively when weighed against other contemporary horror entries, scoring extra points from me for being a sincere effort made by and for people who give a shit about horror cinema with teeth. None of that wimping-out for the almighty lucrative PG-13 box office here, and for that I am quite grateful. 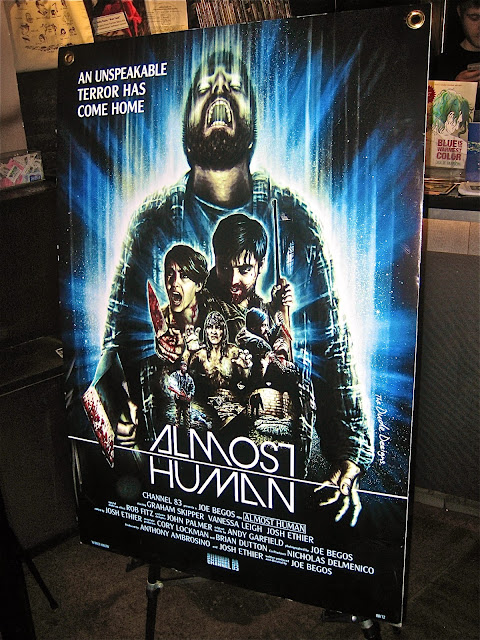 Poster as seen in the lobby on the evening of the Fangoria screeing back in 2014.
Posted by Bunche (pop culture ronin) at Saturday, October 27, 2018