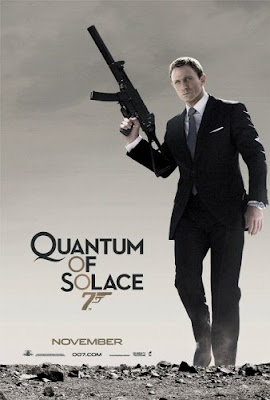 Let’s cut right to the chase with three words: wait for cable.

After the visceral impact of CASINO ROYALE and what was considered by many to be a creative rebirth of the 007 franchise, the middling entertainment found in QUANTUM OF SOLACE comes as quite a disappointment. Those who complained about CASINO ROYALE’s surfeit of character development and emotional content at the expense of action will be pleased to see that the new Bond film reverses that equation and provides the viewer with action set piece after action set piece and nary a moment to catch its breath.

For the first time in the series’ history the new Bond movie is a direct sequel to its predecessor, opening about an hour after the events seen at the end of CASINO ROYALE and dropping us into the middle of an insane car chase in Italy. After bringing in for questioning the guy whose kneecaps he shot off in the previous installment's coda, Bond (Daniel Craig in full-on scowl mode) promises M (Judi Densch) that he won’t go crazy-ape-bonkers and seek revenge on whoever it was who killed his lover/betrayer, Vesper Lynde. But then an unexpected assassination attempt nearly claims his boss’ life so Bond sets out on an odyssey of willy-nilly killing in order to discover who’s responsible (and in the process find out who killed Vesper anyway). So once again Bond goes rogue, then there’s some business involving a vengeance-seeking hottie (Olga Kurylenko) and her evil boyfriend (Mathieu Amalric, looking disturbingly like a slightly defective clone of Gary Oldman) who has a nasty plan that the CIA is in bed with, but that’s pretty much all the plot you get as the film piles on endless action scenes edited in that all-too-common quick-cut style that’s damned near seizure-inducing and actually gave me a headache. There’s a “free running” sequence that more or less repeats the one from CASINO ROYALE, a thoroughly lame boat chase, and there’s even an obvious nod to Shirley Eaton’s famous gilded demise in GOLDFINGER, the deceased posed identically only this time covered in crude oil, but who cares? The film is loud, uninvolving (at least to me) and very much a mediocre, by-the-numbers 007 outing, but at least it’s mercifully short at 106 minutes (far shorter than the majority of James Bond movies).

I’ve definitely seen worse movies — hell, I’ve seen far worse Bond movies — but once again a major studio film felt like I was watching someone else playing a video game, but unlike most other films that struck me that way, QUANTUM OF SOLACE’s entire running time exemplified my video game complaint as opposed to that effect being felt only in a sequence or two. Hopefully the next film will strike a happy balance between solid story and blistering action, because this film was Bond for the Playstation generation and as a person who does not enjoy such perfunctory pyrotechnics I have to say I feel ripped off. I paid $12.50 to see it and feel I did not get my money’s worth, so QUANTUM OF SOLACE joins the ranks of A VIEW TO A KILL, DIAMONDS ARE FOREVER, THE LIVING DAYLIGHTS, OCTOPUSSY and THE WORLD IS NOT ENOUGH as a Bond film I have no intention of ever returning to.

Bummer. After "Casino Royale", which I consider one of the top three of the entire franchise, I had high hopes for this one.

Sadly, your review is pretty much in line with others I've read so far. Sounds like a Netflix special.

Or maybe oven "Quantum of So-So."

Casino royal showed real promise. It was no where near as good as From Russia with love but it was in the same context as that movie. On her majesties secret service, Goldfinger and Dr. No are other example of a well thought out storyline. Then there were the Bond movies where they were just having fun with the character and most of those were the Roger Moore ones such as the Spy who loved me and Moonraker. But then there were movies where they clearly did not care like Diamonds are forever and A view to a kill. Lastly there were movies that were just plain boring like the man with the golden gun and you only live twice. Anyway the point is you never know what to expect.

How about this for a title:
Quantum of suckness

For the record: my vote for the best Bond film goes to the superlative FROM RUSSIA WITH LOVE, followed by ON HER MAJESTY'S SECRET SERVICE, both very tough acts to follow.

Hmmmm... I guess I ned to see it again (I watched the film when I was a teen), but From Russia With Love bored me so deeply that I couldn't wait until ti was over. I remember virtually nothing from it other than a boat, lots of time on a train, and Bond using a flare gun to blow a bunch of shit up. Yet everyone calls this one of the best of the series. Must watch it again sometime...

Too bad about the new Bond. Casino Royale is one of my favorite action films ever, and although it's not as ironic as Goldfinger or The Spy Who Loved Me, I consider it the best film, overall, of the series. Too much to hope for that that level of quality would continue.

(Personally, I wanna see them remake Live and Let Die with Craig. That's one of my least-favorite Bonds, and the one which could do most with a "re-imagining.")

Trustme, from a grownup's point of view you just can't go wrong with FROM RUSSIA WITH LOVE, trust Yer Bunche on that! And if you think LIVE AND LET DIE sucked — which it certainly did! — try reading the novel; it's mean-spirited, violent as hell and would be perfect for Danial Craig, but there's no way it would get made without black people everywhere burning down theaters in protest over the over-the-top negative portrayal of us as svages. But fuck that shit, I love that book!

What a great idea, to go back and re-make some of the weaker installments as new-jack Daniel Craig movies.

For what it's worth, I enjoyed the shit out of "Quantum". The opera scene comes to mind, very stylishly done. I thought the biggest weakness was the ending. The last scene needed a bit of emotional punch, but just went, "ah, whatever." At least you can say that they're nowhere near re-treading the old tried-and-true formula.

I do agree with you on the scene at the opera.