SEARCHING FOR THE RIGHT WINTER CHAPEAU

I recently shaved my head again and I could not have timed the shearing more poorly thanks to the first bitter chill of winter sneaking in, and though my hair grows back pretty quickly I still need to cover up and it's only going to get even colder as the season progresses, so now begins my semi-annual search for the ideal — and hopefully bizarre — winter hat. I already have a cheap all-purpose hat from a local Brooklyn boutique that well serve until I obtain what I want, and I also have an actual coonskin cap (complete with the critter's face adorning the front) that I love because of its warmth and the looks of nausea it engenders from my fellow subway riders, but this year I feel the need for something different.

Initially I thought to stick to the coonskin motif, but made from a skunk instead (as seen below)
but then I read that some skunk hats give of a bit of a whiff when wet, so that's out. 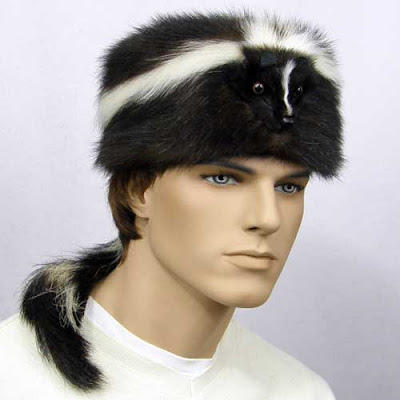 I then chanced upon the shamanistic-looking piece seen below, headwear fashioned from a full coyote pelt that offers considerable cover to the ears and neck, and I'm seriously contemplating getting one. 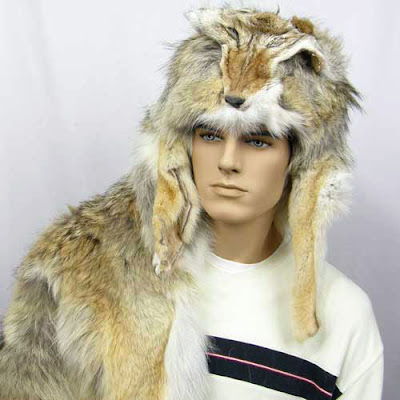 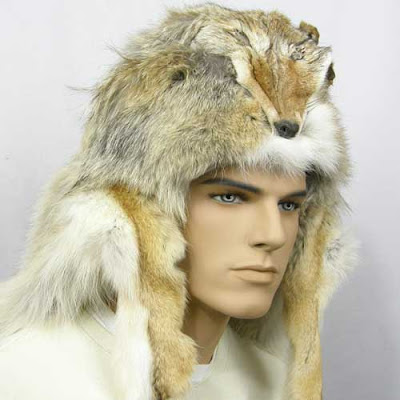 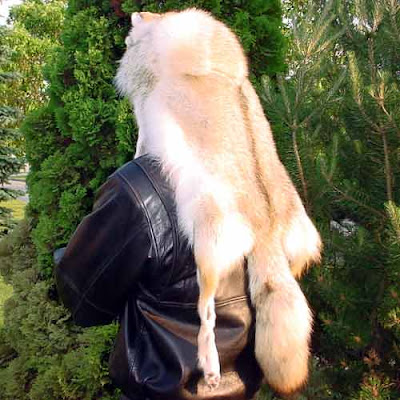 Rear view.
I think it looks rather old school/disturbing and it would go well with my black leather duster, but it is a tad expensive so I'll have to see what I would be willing to sacrifice from my usual budget in order to afford it. At least once it's bought it'll probably last a long time if given the proper care, so this may be a done deal.
Posted by Bunche (pop culture ronin) at Saturday, November 22, 2008

Definitely the coyote. If you dress it right, you could be this totally badass Blaxploitation Inuyasha, hitting people up for their muhfukkin jewel shards on the R.

Interesting how they got Zac Efron to model the hats in those photos...

Nice hat-- shouldn't there be a rat-skin hat for New Yorkers? Too bad it's so expensive to start a company these days-- but that would make money on the shock value alone.

Rock that PETA-hata coyote hat! It would earn certain canniptions from the animal-rights set, but you WOULD look totally badass in a "Fuck with me and I'll dance in your entrails" sort of way.

Definitely the coyote...shit, now I want one. My dad retired to Arizona, maybe I can get him to nab me a fresh kill and skin it for me. I do it up right, and I can be the Druid from Diablo 2 next Halloween and reinforce my out-of-date geekiness. Yeah that's me, Anachronistic Nerd (soon to be a new character on Heroes)