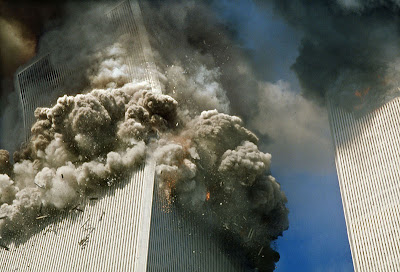 (Photographer unknown)
It wasn't like something out of a Michael Bay cinematic confection.

It burned like some miserable level of Hell, enveloping Ground Zero in a cloud composed of all manner of toxic shit and the ashes of what were once human beings, spreading a jet-black plume of fumes into the sky, utterly marring the NYC skyline and shaking us from our cozy routine in the Big Apple rat race. Some of my friends in Brooklyn had charred debris blown into their backyards and all over their neighborhoods for days, their living spaces now an impromptu and lidless funerary urn. Others among my extended family experienced the Ground Zero cloud firsthand, some suffering physical after-effects that were life-changing and potentially fatal if left unchecked, others having their apartments filled with the dusty remains of their fellow New Yorkers.

Here, for the first time in many of our lives, was the horror of hatred and war brought to our very doorstep, and I cannot speak for the rest of you but I can tell you with absolute clarity that I hope I never witness anything like it ever again. But what truly stunned me to the core was the fact that I was not surprised that such a tragic expression of vitriol toward America could take place, but rather that it hadn't taken place sooner. Hatred begets hatred, and the sheer horror of 9/11 will linger in the American consciousness for a long time, being this era's Pearl Harbor, only writ larger in terms of scale and meaning, and I would hope that it would serve as an unquestionable reminder of the need for peace in our time, but as each year passes and we move that much further from that tragic day I see little if any progress in that department, and no matter who wins the upcoming presidential election that poor bastard has one hell of a mess to clean up (that is if they choose to clean it up, depending on who wins).

So while we all take time out to remember and mourn for those lost or affected by 9/11, let us also channel as much positive energy as we can into the ether in hope of man someday overcoming his seemingly ingrained need to kill his fellow man for what are more often than not the most idiotic of reasons. Tolerance is a bitch thanks to the fact that we all possess some attribute, belief or behavior that drives someone else barking mad, but we've got to start trying to deal with each other if we don't want to see all that our ancestors strove and bled for washed away in a tsunami of ignorance and violence.

Sorry to get all preachy and shit, but having seen those burning buildings with my own eyes from the window of an elevated train that crawled past it like some ghastly attraction at the Universal Studios theme park and smelled the toxic vapors that made their way into the sealed train car, every passenger transfixed in the sepulchral silence, I have a very real and deeply nauseated connection to that moment in time and space on this Earth. And while my own experience was merely that of a shaken and horrified observer I still can't walk the streets of that area now known the world over as Ground Zero without being instantly transported back to the vision of that inferno, all while sightseeing tourists mill about what in my opinion could be considered a cursed place, some treating it like another destination to be checked off on the list of cross-country landmarks to view. Next stop, the Giant Ball of String, followed by "the Big Chicken."

Gotta stop writing now. I'm rambling and preaching, which was certainly not my intent. Bottom line: remember, and make love, not war. For all our sakes.

Well said. I remember the details of that day as if it just happened. Nothing suprises anymore. Well, world peace would.

Don't be too hard on tourists looking at the WTC sight. I have always seen people there being very respectful. Tourists go there, I think, to get a sense of the area and try to comprehend what's happening. After trying to take such a grave tragedy in, I can see why they may want to do something light and fun afterwards. - Xtina