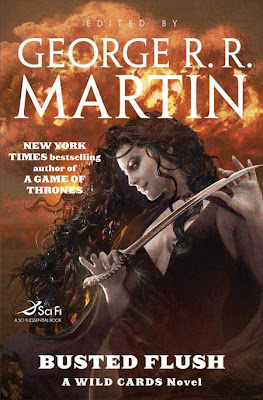 Much more than meets the eye: the deadly and seductive Lilith.

Continuing what could be viewed as "WILD CARDS: THE NEXT GENERATION," this nineteenth entry in the WILD CARDS series takes up shortly after the events of the previous novel, INSIDE STRAIGHT, left off and reintroduces readers to the former contestants from the American Hero reality show. Now banded together as the U.N.-fronted Committee and lead by John Fortune (son of the late (?) super-pimp Fortunato and winged former-cheerleader Peregrine, still sort of possessed by the Egyptian goddess Sekhmet), that motley crew of Aces travels the globe in order to quell horrific situations raging from natural disasters to armed military coups. not totally secure in the knowledge that their assorted superpowers can win the day, much less get themselves home in one piece. As is typical for the mosaic (multiple writer) format of the series the action jumps all over the place, but the main plots take place in Africa, Iran (in an alternate reality take on our current war in the Middle East) and Texas, finally converging in a battle over which faction takes possession of an adolescent whose terrifying, uncontrollable ability renders him a human thermonuclear bomb.

As WILD CARDS novels go, this one is worth reading, but is a middling entry when stacked against much of what came before it. Sure, any long-running series will hit a series of peaks and valleys in terms of holding reader interest, but if you ask me the key to keeping the readers riveted is having characters and situations that generate some sort of desire to keep going, and the problem with this installment and its predecessor is that for the most part the new crop of heroes and villains just aren't that interesting. Lemme break down what's up, both the good and the not-so-good:
Bottom line: I'd rate BUSTED FLUSH among the merely so-so WILD CARDS novels and give it about a five out of a possible ten. It was worth reading, but when I think back to the entries that featured Fortunato, Captain Trips, the Swarm, Yeoman, Demise, Wraith, Kid Dinosaur, Dr. Tachyon, Puppetman, Mackie Messer and the excellent multi-book arc centering on Blaise, the Jumpers and the journey to Tachis (the aftermath of which still needs to be examined, and it would make for a terrific full-length novel), this book seems to be the result of the authors just cranking out anything in order to get an new WILD CARDS book out there. Considering how long the fans waited for new material — a hiatus of seven years, followed by another four and then two more before the current run launched — the results have been mostly somewhat disappointing, with 2006's DEATH DRAWS FIVE easily rating as the best of the post-original series lot. But I'll keep on reading the damned things, provided they keep giving me at least a handful of characters that intrigue me; when that stops, I'm out.

Gods damn it! I wish he'd just finish A Dance of Dragons, already, instead of writing novelized superhero stuff. If Martin goes Robert Jordan and croaks before he concludes his epic series A Song of Ice and Fire, I'm gonna be pissed.

That George R.R. Martin is 'too clever by a half'. I wish he'd get around to the next installment of Song of Ice and Fire too. I feel like I'm being mocked with this sci-fi bullshit. I just want to know what happens to Tyrion.