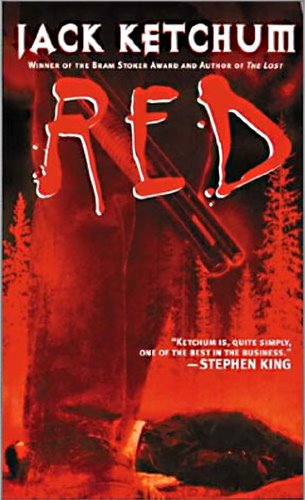 When my man in Eastbourne alerted me to an intriguing movie trailer about two months back, I checked it out and decided to read the source novel before seeing the film. Jack Ketchum's RED is one of the simplest and most straightforward revenge yarns I've ever read, and one that touched me in a very deep way by dredging up the still raw memories of my beloved dog Sam and how he was cruelly taken away from me when I was away during my first semester of college (that's a story for another post, so I'm not going into that now).

RED opens with an old man fishing by the edge of a lake, accompanied by his aged mutt, Red, but their relaxed day is cut short by a trio of asshole teenagers led by a cocky little bastard with a hunting rifle. After attempting to rob the old man at gunpoint and being disappointed to discover he only has maybe twenty bucks on him, the gun-wielding kid blows the innocent dog's head to bits and mocks the old man, advising him to carry more cash in future to prevent further such incidents. When the kids leave, the devastated old man picks up his dead dog and embarks on a quest to see justice done within the legal system, but his efforts are thwarted at every turn by laws that punish such an offense with a mere slap on the wrist and a fine, and when he confronts the father of the kid with the rifle, the father — an absolute asshole of a wealthy land developer — sides with his boys and brushes off the old man as a liar and a crank. Frustrated and at his wit's end, the old man engineers a situation fraught with witnesses in which the young triggerman publicly attacks him with a baseball bat, "forcing" the old man, who happens to be a trained veteran, to defend himself and hand the kid the ass-whuppin' he so richly deserves. After the kid's public beatdown and attendant humiliation, the old man is willing to let it go at that, but things turn out to be far from over as the war between the old man and the kid's family escalates into a vicious and bitter back and forth that culminates in much bloodshed.

The book's an engrossing read and I was riveted from beginning to end, but RED is one of those books where the story's author should have had the good sense to end things one chapter before he actually did, and the book suffers from a three-way happy ending with a bit of tragedy thrown in by way of balance that comes off as almost too trite to be believed. A damned shame for a yarn as compelling as this. 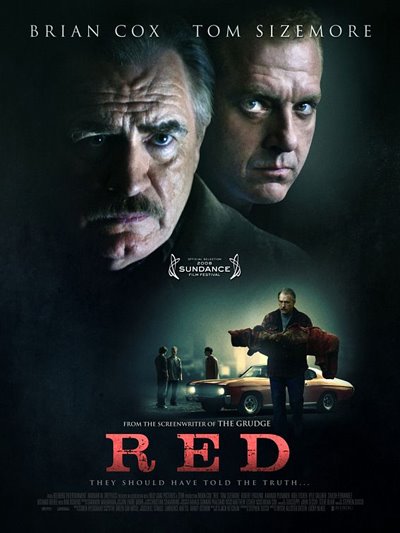 The movie version, on the other hand, has learned from the mistakes made on the printed page and wisely excises nearly all of the elements that marred the book's quality (the remaining element that I found trite in the book is toned down into an organic part of the narrative and no longer nauseates). Starring Brian Cox — cinema's original and best Hannibal Lecter — as the old dude, the film is an improvement over the mostly-terrific book and is highly recommended for those who can handle the revenge-for-the-family-pooch angle. It's kind of an adult reworking of OLD YELLER, only Old Yeller's owner isn't the one who shoots him, and the owner goes after the culprit in Old Yeller's name. It's surprisingly quiet and subdued for a film about righteous anger and vengeance, but it's certainly worth adding to your Netflix queue since it's an indy flick that probably will never make it to the local multiplex (I saw it on opening day at one of the "art" movie theaters here in Manhattan, and it was gone in just over a week and a half). But if you, like me, harbor issues over a beloved tail-wagger, I advise you to approach RED with caution.
Posted by Bunche (pop culture ronin) at Sunday, September 07, 2008

Labels: FLICK YOU, WHAT I DONE BEEN READIN'