OF ALL THE WEDDINGS IN THE WORLD, WHY WASN'T I INVITED TO THIS ONE?!!? 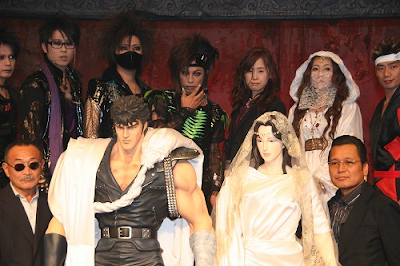 Proving once again that the only people on the planet who out-insane Americans are the Japanese, Kenshiro, head-exploding protagonist of FIST OF THE NORTH STAR, and his much-put-upon fiancee, Yuria, finally got married during an event celebrating twenty-five years of the seminal (sanguinary?) series kicking boatloads of ass and showering the bloody chunks all over the post-apocalyptic landscape. (Although the manga started in 1983, so I guess this is marking the year the anime got rolling?)

I've been a hardcore booster of most things FOTNS since getting baked out of my mind and watching untranslated VHS tapes of it as it came out during its original airing in the 1980's and I've done my level best to turn as many like-minded lovers of insanely violent programming on to it ever since, so I'm more than a bit miffed that I was not invited. I had my lead-lined tux and everything!

Consult Topless Robot for more on this.
Posted by Bunche (pop culture ronin) at Thursday, September 18, 2008