BIZARRO SHIT FROM THE '80'S: "WOLFMAN TAP" by Electric Guitars

Time to delve once more into the Vault's crazy record library! 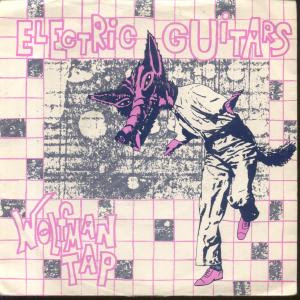 One of the zillions of bizarre one-shots to grace the alternative airwaves back in the days, this 1983 oddity is ostensibly a dance floor record but it eschews the familiar disco and new wave sound to give a breathless audience… (Wait for it!) a tap dance record about a werewolf who’s so psyched to be a lycanthrope that he just can’t help but to channel his inner Savion Glover.

How the fuck does someone even come up with a concept like that? And despite the group’s name there is nary a trace of electric guitar to be found anywhere on this twelve-inch, so the whole thing makes even less sense. A true masterpiece!
Posted by Bunche (pop culture ronin) at Wednesday, September 24, 2008