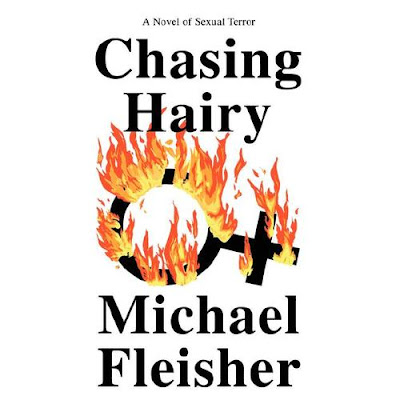 SPOILER WARNING: While I don't go into detail about everything in this novel I do reveal the ending, so you have been warned.

I'd been intrigued by this novel since first hearing about it nearly thirty years ago, back when I discovered one of my favorite comic book writers had come up with an allegedly sick and twisted book about two guys who go through life terrorizing women and being generally abusive pricks. Author Michael Fleisher had written memorable and disturbing runs on DC Comics' JONAH HEX and THE SPECTRE so I was eager to see how his skills would work when applied to long-form prose but the book vanished from print before I could get my fourteen-year-old hands on it, and having finally read it I'm glad I didn't get to it at that age because I wouldn't have had the experiences that would have allowed me to properly process the gist of the piece and it would also probably have planted a major seed of doubt regarding women within my still-developing psyche. 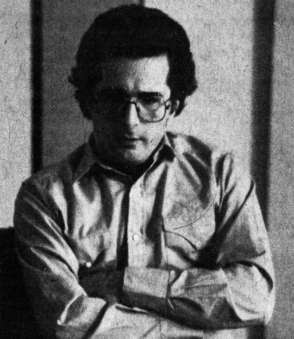 The book's squirm-inducing story is told to us by one of its protagonists, Simon "Sy" Weiner, an aspiring writer who never seems to write much of anything, and he relates in unashamed detail his friendship with Ken Pederson, a hyper-masculine would-be philosopher he met in college, the two having bonded over their interest in chasing "hairy" (a synonym for "pussy" and women in general, in their way of thinking). The book chronicles several years of their relationship and shows us the barely concealed hostility toward women that lurks below the surface of both men, a hatred spawned by what they perceive as controlling women who seek to thwart them by not mindlessly acquiescing to their every childish whim. Both men eventually find themselves in ill-advised marriages — Ken to a callow plaything he unintentionally knocks up, Sy to a black woman with whom he hopes to live out his race and power issues — and after both relationships end in tragedy things spiral inexorably into dark directions, both sad and disturbing, until it all literally explodes in an unspeakable climax that closes the novel as abruptly as if some outraged hand had swept the author's typewriter from his desk before he could type another word.

The narrative reads as an anti-heroic journey in which the protagonists experience much yet learn nothing; Ken's always-on-the-edge anger twice erupts into shocking acts of psychotic violence, the first of which landing him in a mental institution during high school while the other places him deservedly behind bars for a couple of years.  Meanwhile, Sy's path presents him with a series of females whose sole purpose seems to be serving as an oral holster for his penis and during all of this the reader comes to loathe both men for their sheer arrogant and unaware assholism. For those of you out there who are turned off by stories of unpleasant people doing and saying unpleasant things, this is a book you would do well to avoid thanks to its unrelenting depiction of male behavior at its most base and ugly, and that's long before the book's awful and jarringly-abrupt ending.

Throughout the book the reader is exposed to Ken's potential for violence and is positively expecting the moment when it will finally leap forward in some truly horrible way, but I have to admit I was both shocked and surprised when, after Ken and Sy decide to cruise around and try to find Sy some "hairy" during a visit to California, the pair of assholes pick up a hitchiking woman whose car had run out of gas and offer her a lift back to her car. Ken had told Sy that there were "gobs of hairy all over California" just gagging to get it on, and when Ken veers the car off the road past the woman's stranded car the grateful-to-the-point-of-insanity passenger declines to have sex with the duo because of ovarian issues, but is more than happy to orally service them. They pull off the road and she does indeed gleefully and repeatedly provide the promised head, but Ken gets rough and breaks out a camera to chronicle the action, at which point the woman expresses her discomfort with the direction things begin to go in. Ken, after delivering an impassioned and clearly demented speech about the need to make a statement against all the hairies who ever told him and every other man what to do, begins to hit the woman and then douses her with gasoline. Sy, in his one moment of decency in the entire novel, attempts to fight Ken off but ends up falling out of the vehicle, his head clearing in time to see the image of Ken tossing a lighted match onto the hapless hitchhiker, the moment registering to him in appalled slow motion. Ken dives free of the car and both men watch as the innocent woman is consumed with flame and the car's gas tank ignites, blowing the car to kingdom come and showering her sundry body parts all around them.

It is at that exact point where the novel ends.

No denouement, no lesson learned, no comeuppance. Just a sudden and terrible act that leads you to wonder "What the hell happened next?" but that answer is not to be had. I sat there for a few moments after finishing it and I asked myself, "Why the fuck did I read this, and what the hell was Fleisher thinking?" Was this book the result of a lifetime of pent-up anger finally achieving expression? I don't automatically think an author's deepest thoughts necessarily dictate where his written expression goes; sometimes the creepiest, most down-and-dirty shit ever to grace the pages is spun from an author's tapping into great darkness in order to spin a disturbing yarn — Stephen King's PET SEMETARY being a good example — , but never before have I pondered whether the tale I just read stemmed from a genuine feeling or opinion. Since reaching adulthood I and every guy I know has at some time or another harbored anger or resentment toward the fair sex, but those moments pass and we move on. I distinctly did not get that feeling of moving on from Fleisher's book, and I have to admit that it disturbed me so profoundly because throughout it I saw several examples of the kind of shitty behavior that I myself had either engaged in or thought about during my young, dumb and full of cum days, and I certainly did not like what I saw (no, I never beat or immolated a woman, thank you very much). I'm older now, and I like to think somewhat wiser, but I was definitely and uncomfortably reminded of a time before I was in any way mature or enlightened in such matters.

The bottom line is that this is one seriously depressing, hate-filled piece, and it must have really hit like a blowtorch to the privates when first published nearly three decades ago. Those expecting "a novel of sexual terror" as described on the cover will be disappointed by the lack of explicit rape, torture, etc. until the story's conclusion, but those interested in a look at the unconsciously woman-hating psyches of two characters whose misinformed, over-inflated senses of self lead them to believe that women are around solely to serve their most base and childish needs are advised to check this out. Just bear in mind that it's one majorly depressing mamma-jamma with nary a trace of humor to relieve the relentless torrent of slowly-burning hatred, for blacks as well as women. And that ending...Yeesh! 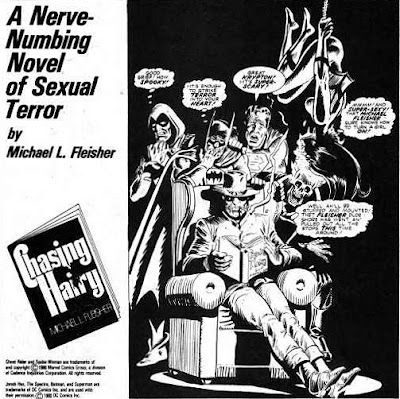 1979 CHASING HAIRY ad from THE COMICS JOURNAL. Judging from the humorous tone of the ad, I seriously doubt the person who came up with it ever read the novel.
Posted by Bunche (pop culture ronin) at Tuesday, September 02, 2008

In an interview with the Comcs Journal Harlan Ellison called Fleischer on his whole body of work "bug fuck crazy" but in a good way. Fleischer then sued both Ellison and the Journal. The damned thing took almost a decade to be resolved

yeah, I knew about the Ellison/Fleisher suit, and it was obvious to anyone who read what Harlan had to say about Fleisher's work that it was Ellison's usual way of paying a compliment masked in apparent derision. It was clearly a festival of appreciation, but the suit happened and Fleisher lost. I'm not gonna say the guy's actually nuts or anything, but to take Ellison's comments in such as way as to feel the need to sue makes me question what goes on in Mr. Fleisher's head (or went on in his head at the time, anyway).

I rememebr that suit and its fallout controversy well. And while a morbid part of me wanted to find out what all the trouble was about, I never got my hands on - or really wanted to spend the time to read - Chasing Hairy. Thanks... I think... for taking that bullet for us.

And WTF was the ad artist thinking? "Super sexy?" "Turn(ing) a girl on" is not in any way the effect I'd imagine this book having on any human female.

Tell me about it!

The suit was nuts. The defense was able to prove that Fleisher was not harmed professionally in fact he made more money especially when he started writing one of the Conan books for Marvel
If you want to prove that he was bug fuck crazy just submit those Spectre stories where the Spectre turns a crook into wood then saws him into sections. Then turns one into glass and them "smash". Or the Jonah Hex story where an aged Jonah finally loses a fight & one of the townsfolk stuffs Jonah's body & turns it into an attraction.
Good times, good times.

How the hqiz did they manage to get away with using all thoes trademarked characters in an ad like that, let alone use them to say what the ad says?