Quick quiz, dear Vault readers. What would Yer Bunche rather be doing right now: mindlessly transcribing the text from vintage baseball cards or mingling and having a blast at a European comics convention? 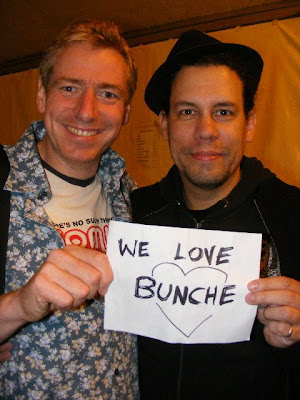 I just received this from Chris Weston (the leader of "the Ginger Squad" and illustrator of Marvel's THE TWELVE) and Rodney Ramos (New York Puerto Rican menace to society and inker of no small renown), both of whom attended XIII JORNADAS DE CÓMIC DE AVILÉS in Spain. And not five minutes later did I receive this one: 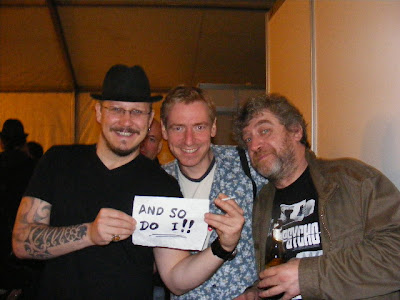 Liam Sharpe (penciler of great quality), Chris again and Steve Dillon (he of PREACHER and THE PUNISHER illustrative infamy), all lovely and fun human beings. Yeah, you can probably imagine my frustration at the moment, sitting here typing up a word document chronicling the up-to-1958 achievements of a baseball player named Jackie Jensen (something I do not give a squirt of rat's piss about) when I could be hanging with my pals and former-colleagues, geekin' out, getting shitfaced and chasing luscious senoritas in fucking Spain (NOTE: Chris ain't chasing; he's a daddy of three — the aforementioned Ginger Squad — and is married to Karen the Cool, so he's smart enough not to fuck up a great thing, and I can't speak for Liam of Steve).

Wish I coulda been there...