OVERPRICED COLLECTOR'S TOY OF THE YEAR 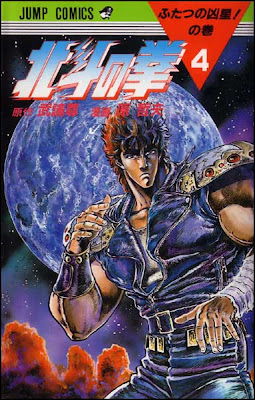 An iconic portrait of Kenshiro by co-creator/illustrator Tetsuo Hara.
It's the twenty-fifth anniversary of HOKUTO NO KEN, aka FIST OF THE NORTH STAR, so it was inevitable that the Japanese, masters of the usually excellent but also ridiculously pricey toys aimed at hardcore fanboy types (aka Yer Bunche), would put out a toy of the series' hero, Kenshiro, for the collector's market. Well, my ever-vigilant pal Mark G contacted me to let me know that such a toy has been issued, and it is indeed pretty damned good. But speaking as an expert on this character, I do have a few quibbles: 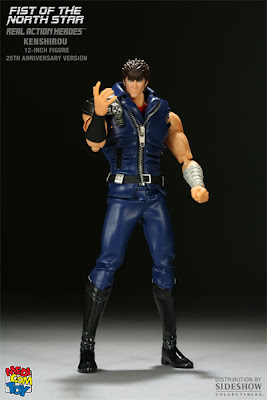 Kenshiro — or "Kenshirou" as it's sometimes spelled — stands about a foot tall and is decked out in his customary ripped-off-from-THE ROAD WARRIOR leather duds and looks pretty good. But I must confess that I never liked his look as much once he stopped looking like a biker and started tucking his trousers into what appear to be a cross between equestrian footwear and cowboy boots. That made him look too much like a superhero and less like the post-apocalyptic embodiment of Bushido that I had come to love. 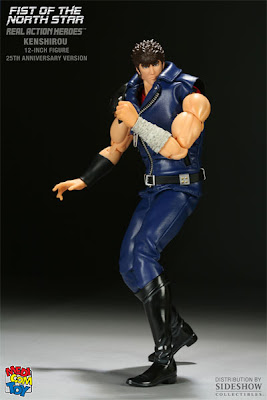 The pliable leatherish outfit is quite nicely done, but if they were going to bother to go as all-out with this as they did, I wish the makers had given him a matching shoulder pad; yeah, Ken's aura and expanding musculature burn through his biker gear with alarming regularity (where does he get replacements from anyway?), but since the toy isn't depicting him in that state he should look like the image on the comic cover shown up top. 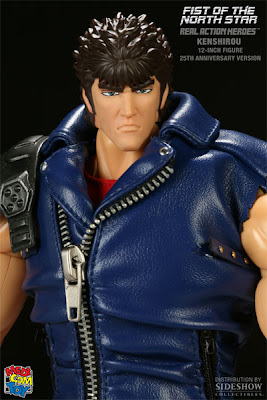 Once again the sculptor has failed to nail Kenshiro's likeness. This is far from terrible, but Ken's got a weird and long horse-faced look, which I would guess is what makes him such a bitch to properly craft in 3-D. His face here looks like some anonymous actor in the role and conveys none of Ken's intensity or menace. At least give him a furrowed brow, for fuck's sake!

Nonetheless, if this were priced at, say, sixty bucks I would have picked it up, just for the sake of adding another Ken to my ever-growing FIST OF THE NORTH STAR collection. But at a release price of $249.00, I can let this one pass.

Hey, I totally understand the collector's limited edition thing, but that's just plain crazy. Besides, I'm more than happy with my 1984 Bandai Kenshiro, one of those big, virtually impossible to damage action figures that has virtually no articulation, but would have delighted a child who was a fan of the cartoon show because it's arms can move (vital when one considers all the punching Ken gets up to) and it looks like the way he is depicted on the show. 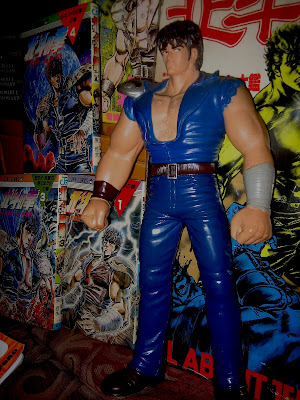 My old school Bandai toy of Kenshiro from the 1980's: clenched fists, attitude, and none of that cowboy boot faggotry.

I got this thing back in 1991 from one of the freelancers at Marvel Comics who was a heavy duty collector of anime-related stuff (thank you, Alex), and it only cost me twenty bucks at the time. I have since seen it going for over a hundred dollars, mint in the box, on eBay but I'd never part with mine. Stiff though it may be, Kenshiro stand there braced to explode into combat, a subtle sense of barely-contained anger evident in the tense figure, and his eyes are focused to his left, as though listening to the irritating taunts of some overconfident, post-apocalyptic douchebag who clearly doesn't know who he is. Yet. 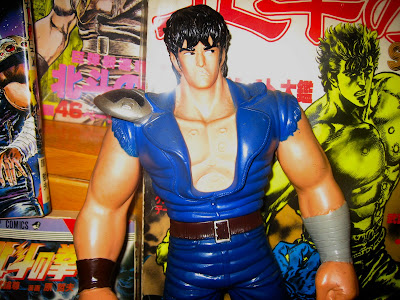 I'll replace this shot with a better, not-flash-saturated image as soon as possible.

What matters is they got the likeness and, more importantly, Ken's pissed-off attitude. Designed to be the knockabout plaything of rambunctious little boys and priced to move when it came out, this one's a real gem and serves to prove that sometimes it's best to keep things simple (and cheap).
Posted by Bunche (pop culture ronin) at Friday, September 26, 2008

Labels: FIST OF THE NORTH STAR, GEEKIN' OUT