I just returned from a weekend at my mother's house in Connecticut, where I received an unexpected windfall.

My family moved to the Westport back in the summer of 1972 and one of the kids I knew from the beginning of second grade that year was a little girl named Leslie Casson, one of the minute number of genuine nice children at Hillspoint Elementary. When she observed my interest in drawing she told me that her father was a syndicated cartoonist by the name of Mel Casson, and over the years I had many dialogues with Mel regarding the history of the American comic strip and his own personal experiences in that industry, along with many anecdotes about the luminaries of the daily strip including Milton (TERRY AND THE PIRATES) Caniff, Charles M. Schultz of PEANUTS excellence and ubiquity, and many, many others.

As the years passed I lost touch with Leslie — despite my mother and I moving to a new house in 1980 and instantly becoming the Cassons' next door neighbors in the process — but I did run into her here in Brooklyn about six years ago and discovered she was now married and a mom. Then we skip ahead in time to a few months ago and the passing of Mel; Leslie (now having changed her first name to Culver) returned to the old family house and while sorting through her dad's things she found a treasure trove of old books of collected comics — dailies and magazine gag cartoons, as well as the odd one-shot bio of a featured cartoonist or an examination of the medium that was barely fifty years old when the books in question were published — and she figured I would enjoy them. Oh, how right she was!

Among the gems found in this three-shopping-bag assortment were a book on patriotism written and drawn by Milton Caniff that he had actually signed (!!!), a stack or rare hardcover Peter Arno books (whose cartoons were far more risque than I remembered from the days when my Aunt Connie had some of his more family-friendly collections lying about), a Charles Addams collection from 1946 that I'd never heard of 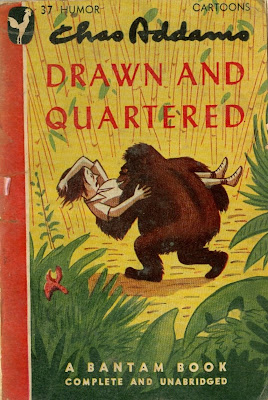 (which is rare, because I am a hardcore Addams nut), a first edition of the very first POGO collection, 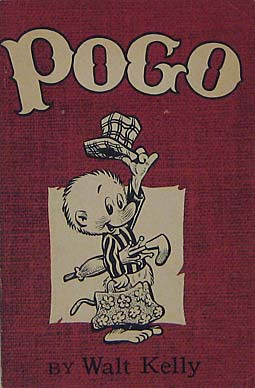 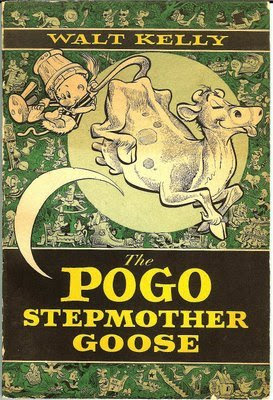 a 1966 Hanna Barbera style guide that features model sheets for pretty much all of their major characters at that time (sadly, this was just before SPACE GHOST and the H/B superhero boom) and contained gorgeous xeroxed model sheets from THE PEBBLES & BAMM-BAMM SHOW (1971) where the toddlers from THE FLINTSTONES were teenagers, a first edition hardcover collection of Milton Caniff's MALE CALL, 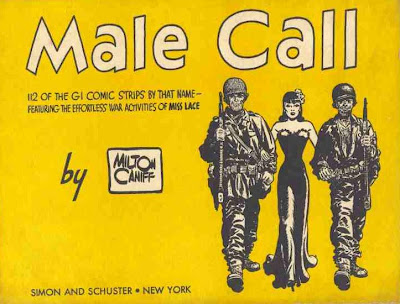 a signed (!!!) copy of a Caniff STEVE CANYON primer on the meaning of patriotism (that won't make you puke), and a book written by BEETLE BAILEY creator Mort Walker about the ins and outs of the life of a syndicated cartoonist, entitled BACKSTAGE AT THE STRIPS (Mason/Charter, 1975). 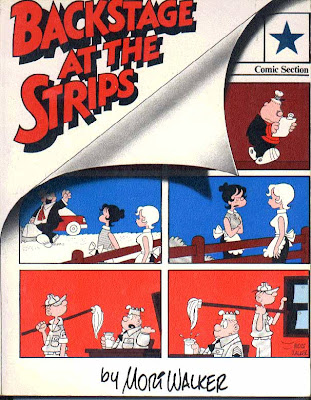 I hadn't seen that book since I checked it out from the Westport Public Library some thirty years ago, and among other fascinating thing it contains a glossary of terms that identify various cartooning tropes in verbal shorthand (more on that in another post someday) and a great chapter on editorial censorship, particularly about how it can be frustrating for to have an editor censor gags in favor not risking alienating or offending the readership, an especially telling chapter because the reader gets to see some rejected BEETLE BAILEY and BONER'S ARK (remember that one?) strips that prove Mort Walker was actually funny when his gags weren't being watered down or vetoed altogether (I'll scan those strips the next time I'm in Westport and run them here, so you'll see what I'm blathering on about).

But the main reason why I'm happy to have received BACKSTAGE AT THE STRIPS is that it contains a strip I never forgot since I first saw it in there three decades ago, namely the following unbelievable DENNIS THE MENACE daily from 1970, and not 1917: 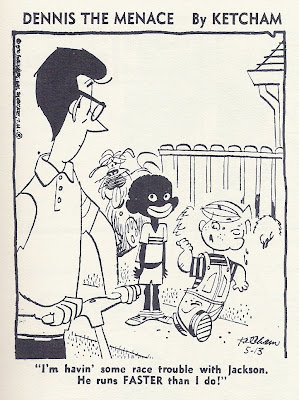 Yes, this actually ran nationwide in 1970, which beggars the question of just how out of touch creator Hank Ketcham was. Were the 1960's something that didn't happen for him? Whatever the case, the Cleveland Press printed this apology the day after the strip ran, printing it in place of what would have been that day's DENNIS THE MENACE installment:

Yesterday's DENNIS THE MENACE cartoon offended a number of Press readers. The Press apologizes for the affront caused by the cartoonist. It assures subscribers that such a thing will not happen again.

What truly amazes me about it is that I don't think Ketcham actually meant any harm and just didn't know any better. DENNIS THE MENACE always kind of existed in a 1950's-style, suburbia-that-never-was OZZIE AND HARRIET universe of bland (though very well drawn) blandness that was informed by generations of outdated humor, and the depiction of the kid as a Sambo stereotype was just a part of the once-accepted visual language. Too bad Ketcham apparently hadn't payed attention to social advances and depictions of us "race" types since the mid-1940's.

Anyway, thank you, Culver, for these amazing additions to the Vault's comics library. Your dad was a great guy, and I regret that I didn't get to spend more time with him.
Posted by Bunche (pop culture ronin) at Monday, September 22, 2008

One more step backwards would have had Dennis calling him "that uppity Jackson..."
-Matt

Yes the 60's did happen for him. He just thought that the whole civil rights movement was all in good fun, since there were dogs and water involved in most protests. He must have thought it was a "special" kind of splash party. Funny thing is though, there are some people that still refer to African Americans as "colored" and when you take offense they truly have no idea why "you people" are sooooo "sensitive".

Sweet steaming Christmas, or words to that effect. Nice to have friends like that. That is some mother-hopping mother load. Wow and further, wow.

Poor Mr. Ketcham, you can almost see him chuckling at how he so deftly poked gentle fun at the "race problem" before sending that one in. Nice pickaninnie, though. Dressed him up nice, instead of that potato sack. It's so silly, of course the boy is faster than Dennis-- the Blacks have an extra bone in their ankle. Everyone knows that.

Let's not forget those buck-toothed Chinese characters in TERRY AND THE PIRATES. I could never figure out why all the Chinese MEN looked like CHOP CHOP and all the WOMEN looked like DRAGON LADY.

To this day, it's impossible for an Asian actor to get a role on TV that isn't a doctor, a nerd, a yakuza or a martial artist of some kind. I've been a SAG member since 1976 and I have never been called to an audition for anything but a complete stereotype.

I hope you will post some of those Pebbles and Bamm Bamm Model Sheets. I love that stuff!

It might be worth noting that by the 70s Ketcham was using a number of ghost artists, so he probably didn't draw this himself. Still, he maintained a great deal of control over the strip no matter who drew it, so this is still mighty odd.

While I agree the rendering of Jackson is crude, the sentiment seems to be of kids misinterpreting words they hear adults use. I think it's kind of innocuous. But, hey, if you're looking for something to get pissy about, go for it.

Wow. Lotta hate out there for a guy who was simply out of step with the times.

I saw this originally when I bought & read Walker's 'Backstage at the Strips' in the 80's. Art aside, the joke is funny. Yeah, it's funny in the stereotypical way, but there it is. If stereotypes weren't funny how did 'Revenge of the Nerds' make enough money to spawn three horrid sequels... (shudders just thinking about them!)

What amazes me is that every time someone drags this dead horse out for another beating, the sticks and stones fly straight toward Ketcham. Nobody EVER points the finger of ridicule and derision at the HUNDREDS of editors that ran the strip in their papers either because they were too lazy to care what was on the funny pages (it's just dumb cartoons, right?), or because THEY thought it was a hoot.

Credit where credit is due, fellas. Just sayin'…

Almost forgot… awesome legacy, man! Some serious cartoonage just in the books you feature here. I can only imagine…

BTW, you DID stick your nose in some of the bindings to smell the history, didn't you?

The negro a menace to modern civilization.

this dude trying to be funny or an actual bigot??
-Big Mike