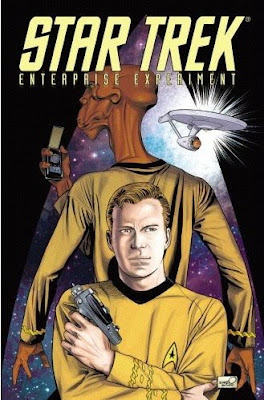 I don’t know about you, but I’ve always felt that comic books based on movies or television series were largely superfluous. If you can go to the cinema or turn on the tube and watch the real thing, what’s the need for a comic book adaptation? Nine times out of ten, comics based on those sources end up being little more than catalogs of photo reference or poorly drawn original works that make one wonder why they bothered in the first place. Some of these adaptations go on to a life of their own after the source work is over and done with — Marvel’s long-running STAR WARS series springs to mind — but most fade fairly quickly, victim of leaden stories coupled with art that more often than not is the visual analog to a strong sedative.

Perhaps the most frequently revisited of movie and TV properties is STAR TREK, a visually and conceptually appealing playground in which writers and visual artists can go in just about any direction their imaginations may take them. Existing in four color form since the days when the Original Series (hereafter referred to as TOS) first aired on NBC, STAR TREK has had a checkered past as comic book fare and has often sucked out loud (the major exception to this rule being the 1992 graphic novel DEBT OF HONOR, written by Chris Claremont and illustrated by Adam Hughes). But, as has been proven time and again since the 1960’s, STAR TREK fans are a loyal, rabid lot and will often accept just about anything bearing the series imprint, no matter how sub par.

I know of what I speak, being a lifelong TREK goon who’s willing to give just about any new TREK project a chance, but even I have a limit and will not put myself through what I perceive as bullshit “product.” My tastes in TREK loyalty were born from and remain loyal to TOS, but I also enjoyed the animated series, three of the movies, about a third of THE NEXT GENERATION, most of DEEP SPACE NINE (my vote for the best TREK series since TOS) and loved the too-late-to-do-any-good excellence of the final season of ENTERPRISE. I watched the first episode of VOYAGER and checked in on it about ten times during its run, but it bored the living shit out of me and struck me as a far more pretentious version of LOST IN SPACE, only minus that show’s highly entertaining and often hilarious camp factor.

My point in mentioning all of this is to declare myself a sort-of hardcore STAR TREK geek, so keep in mind the following review is from someone who loves this stuff. When it’s good, that is.

Aimed at filling in the remaining two years of the “five-year mission,” IDW Publishing’s collected edition of STAR TREK-YEAR FOUR: THE ENTERPRISE EXPERIMENT is a direct sequel to the classic TOS episode “The Enterprise Incident,” one of the very best of the series’ three-year run. That was the one where the Enterprise violates the Neutral Zone and steals a Cloaking Device from a Romulan craft commanded by a beautiful (and strangely nameless) female commander who takes a shine to everyone’s favorite Vulcan sex-machine, Mr. Spock. Terrific stuff and remembered for a good reason, but did it need a sequel at all, much less in comic book form?

The story brings back the same Romulan crew from “The Enterprise Incident” — which makes no sense since the lovely commander was likely being sent to a formal military execution after allowing the loss of a Cloaking Device to the Federation; hey, the Romulans don’t play — as well as Klingon Captain Kor, and involves the Enterprise crew in a strange “phasing” mishap thanks to an untested Federation version of the Cloaking Device sending the Enterprise and her crew into another dimension (also directly referencing Captain Kirk’s experiences in “The Tholian Web”). Lieutenant Arex from the animated series is even thrown in — to no effect whatsoever — and we’re “treated” to rote set-to’s with the Romulans and the Klingons, with Sulu getting surgically altered to look like a Klingon and blah blah blah pfooey. It’s very much a case of “been there, done that ages ago” with absolutely nothing interesting or fun to keep a reader’s attention.

The sheer tedium of all this is bad enough, but what really sends this over the cliff is the utterly uninspired artwork by Gordon Purcell. It’s six-issues-worth of stiff photo reference handled by several inkers who apply a minimum of varied line weights to the artwork — the notable exception being the all-too-brief efforts of Jose Marzan Jr., inks so jarringly full of life in a desert of brittle tracing that they’re like a Carnegie Deli pastrami sandwich being handed to a starving man — the final results registering as a particularly dull coloring book.

But by far the saddest aspect of this project is that it was co-scripted by D.C. Fontana, a writer for TOS, the animated series, NEXT GENERATION and DEEP SPACE NINE who contributed such classics as “Friday’s Child,” Journey To Babel,” “This Side of Paradise” and “The Enterprise Incident,” among others. She’s proven herself an excellent TREK writer over and over (we’ll let the penned-under-a-pseudonym “The Way To Eden” slide), even providing the animated series’ “Yesteryear,” the excellent look into Spock’s boyhood that’s the only episode of the animated show to be considered canonical, so this assembly line repackaging of TREK tropes is hugely disappointing. It’s mostly a bunch of talking heads with their yammering interrupted by tepid scenes of would-be action, something that may have worked had this been a television episode, but as is it has all the verve of two-day-old road kill after the local turkey buzzards have at it. If this is what the two missing years of the mission have to offer, all I have to say is “ABORT! ABORT!”
Posted by Bunche (pop culture ronin) at Tuesday, September 30, 2008

I can never read these. I just end up playing a game of "which heads did he just trace off a photo".

Bummer. When I first heard about this series I was optimistic but wanted to wait for the trade collection. At least I'll save some money (time to buy that animated series collection).

I like comics based on some TV shows...it's like getting an extra episode of a show you love. And this miniseries has the added benefit of showing the actors when they were still young and could actually pull off action scenes.
I enjoyed this miniseries because of the fond recalls of older storylines, some decent dialog and especially the art. The artist uses some photo reference (it's very common these days even in hero comics), but they move around well and with some dynamics. And they look like the actors and the settings of Trek. I'm not sure there are that many artists out there who can satisfy those unique problems on a monthly schedule. Sure Adam Hughes is great, but he seems to only be able to finish a cover or two a month.
I'd recommend this mini, especially for Trek fans.