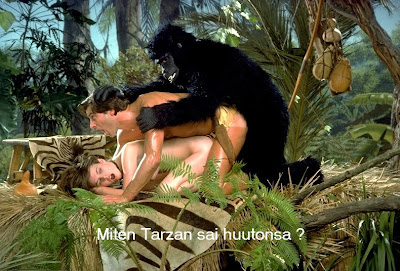 Think of the gorilla as Hollywood, and you you get the picture.
My man in Eastbourne, knowing full well of my love for Tarzan of the Apes, sent me a link to an announcement for a Tarzan movie that's gearing up, and after reading it I wanted to scream "Bundolo!!!" I swear to the gods of cinema, whenever I hear "reimagining" I just see red... From Dark Horizons:

Stephen Sommers ("The Mummy," "The Jungle Book") is in negotiations with Warner Bros. to direct the 'reimagination of the classic Edgar Rice Burroughs creation "Tarzan, Lord of the Apes" says The Hollywood Reporter.

Stuart Beattie ("Collateral") and Sommers will co-adapt the script and Jerry Weintraub ("Ocean's Eleven") is set to produce. Beattie and Sommers do not plan to work from the original 1914 Burroughs tome or any previous film, rather an entirely new approach though details beyond that are being kept under wraps.

Guillermo del Toro had been attached to direct a script written by John Collee ("Master and Commander: The Far Side of the World") when the project was announced two years ago.

"Tarzan" has been adapted countless times with recent adaptations including 1984's "Greystoke" with Christopher Lambert, a direct-to-video feature in 1998 with Casper Van Dien, Disney's 1999 animated feature, and the short-lived 2003 series with CK model Travis Fimmel.

And just as an FYI, the 1998 Casper Van Dien TARZAN AND THE LOST CITY did play theatrically, and I should know because my buddy G-Man and I were the only two people in attendance on opening night in a Norwalk, Ct. multiplex (until a family of Mexicans showed up just after the opening titles, bringing the audience total up to seven). But as for the new Tarzan flick, I have no hope that this will be anything other than another rectal violation of everyone's favorite jungle lord, perhaps even worse than the execrable TARZAN, THE APE MAN (1981), a film that has the dubious distinctions of:
And if the new film is actually worse than that floater, it will stand as a new low in the long history of the ape man's mistreatment at the hands (and rapacious, turgid member) of Hollywood. 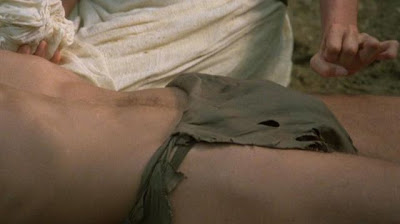 An actual scene from 1981's TARZAN AND HIS DICK, er, TARZAN, THE APE MAN. No, seriously.
Posted by Bunche (pop culture ronin) at Thursday, September 04, 2008

And coming from the... er, hands of "Van Helstink" Sommers, this is sure to be a turd of the highest magnitude.

So they took it away from Del Toro and gave it to Sommers? That explains a lot about the way Hollywood does business...

PS: Your picture explains a lot about Tarzan's famous yell, doesn't it?