After the disappointing SUB-MARINER: DEPTHS, I took the advice of Semitic Sub-Mariner Supporter and checked out the trade paperback of the collected SUB-MARINER: REVOLUTION mini-series and I'm pleased to say this time around Namor's actually in the story as opposed to being found only on the cover. 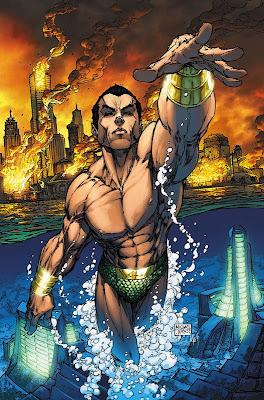 Cover for the SUB-MARINER: REVOLUTION collection.
The series takes up after Marvel's massive CIVIL WAR crossover, specifically the plotline involving Namor's cells of sleeper agents that had been carefully hidden within the surface world society. When the sleepers were discovered and their purpose made known to the US government, Namor once more found himself a figure of mistrust and on the cusp of all-out war with the surface world, a situation in no way eased by a devastating terrorist explosion that has all the earmarks of having been perpetrated by a rogue Atlantean sleeper cell. S.H.I.E.L.D., now lead by pro-superhero-registration advocate Tony Stark (aka Iron man), is on full alert and demands Namor submit Atlantis to monitoring by the surface government, something that anyone who's ever read a Sub-Mariner story knows Namor would not tolerate even for an instant, so Namor sneaks past Iron Man and S.H.I.E.L.D.'s formidable attack-sub fleet to find the rogue cell and exact justice. As everybody knows, Namor ain't exactly a guy to deal with these things in a possibly redemptive manner for his perceived enemies, so the rogues don't have long for this world unless Namor runs into some obstacles along the way, including some rather obligatory fights with Wolverine, some Sentinels, and a brutal and mutilating battle with the now government deployed Venom. And as if that weren't bad enough, once Namor's away from Atlantis designs are made upon his throne by the latest wave of opportunistic (and suicidal) would-be usurpers, a tired plot that was used up after the first time Byrrah tried to pull a fast one in Namor's absence back in his 1960's TALES TO ASTONISH days. All of this comes to a predictable, if entertaining, resolution until the last few pages, when Namor realizes there's no way to comply with S.H.I.E.L.D.'s mandate without losing face with his people (to say nothing of his own considerable pride), and rather than take it up the collective ass Namor makes a decision that shakes up the Atlantean status quo in ways I did not see coming, and was quite pleased with as of the final jaw-dropping page.

SUB-MARINER: REVOLUTION is an interesting read, chock-a-block with the intrigue, arrogance and heavy-hitter action and violence one expects from a Sub-Mariner story, but it isn't necessarily a classic by any means. Every element, save the unexpected conclusion that simply begs for a sequel, has been seen and done many times, one of the biggest continuing problems with the character's stories since his 1960's revival, and here we get those stock situations redressed and tarted-up for the current generation of readers:
But as by-the-numbers Sub-Mariner books go this could have been a million times worse, and the art is pleasant enough (it's none of that Jae Lee mess, thank Neptune!), plus that excellent ending, so I give this a recommendation mostly so readers can witness the establishment of the new status of the Atlanteans and the Sub-Mariner himself. Let's hope that Marvel doesn't blow the potential set up here, but considering their propensity for doing just that it could very easily go either way. Me, I'm gearing up to be let down, but we'll see...
Posted by Bunche (pop culture ronin) at Tuesday, September 09, 2008